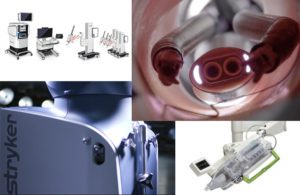 But they are not alone. Learn about the status of 12 companies playing an important role in the robot-assisted surgery space.