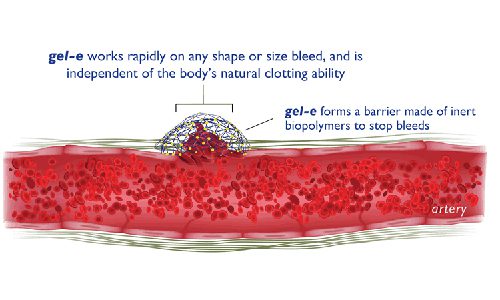 Wound care, hemostatic devices and associated products may not have the flash of their technological competitors in medtech, but are just as innovative. College Park, Md.-based Gel-E is looking to make waves in the hemostatic and wound treatment fields with its platform of wound care products designed around its proprietary, self-assembling biopolymer, which it claims create rapid coagulation with inherent anti-microbial properties.

Gel-E is developing a number of different applications utilizing its hemostatic technology, including strips, films, bandages and gels designed for use both externally and internally.

The company touts significant improvements over commercial chitosan-based hemostatics, and was featured as a top innovator in the late Stephen Hawking’s BBC series. The company also recently won a $1.4 million grant from the U.S. Department of Defense to develop products aimed at prolonged field care.