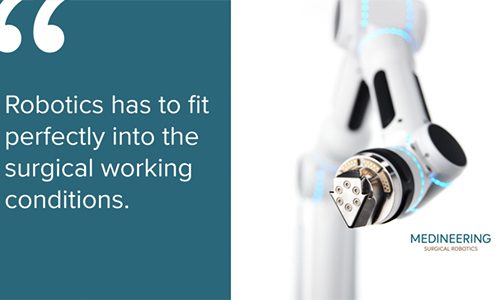 The company is developing a portfolio of robotic devices designed to assist clinicians in minimally invasive surgeries, specifically focusing on surgeries in the head and neck. So far, Medineering has produced an advanced positioning arm designed for attaching other robotic devices and an endoscope positioning system.

The seven-jointed positioning arm serves as the base for the company’s plug-and-play robotic system, and can be directly attached to an operating room table’s rail system. The system allows for exact positioning control and a mechanical interface for non-motorized instruments. The transnasal endoscope robot, which is designed to be attached to the arm, allows for robotic control of endoscope positioning.

The company is aiming to develop a number of procedure-specific attachments for the platform, and has already received support from its strategic partner, Brainlab.