Telethon Kids Institute researchers are hoping 3-D face scanning technology will help detect autism in children as young as a year old, which is at least one year earlier than current practices allow for.

The study is scanning the faces of children with autism spectrum disorder (ASD), as well as their siblings and parents to provide insights into ASD and earlier detection.

“So we’re recruiting children between the ages of nine and 15 months who have already been identified as showing warning signs and we’re obtaining facial images from these children,” said Dr. Gail Alvares, a researcher with the autism team at Telethon Kids Institute. “We’ll be following them up over the next few years to see which of those children will go on to develop autism.”

One thing being examined is the so-called ‘masculine’ face.

“What we found is that boys who haven’t been diagnosed with autism prior to puberty actually have more masculine faces,” Dr. Alvares said.

That is linked to testosterone exposure in the womb, according to the researchers.

“So the more testosterone you are exposed to as a foetus relates to how masculine your face is in your adult life, and that’s across males and females,” she said. 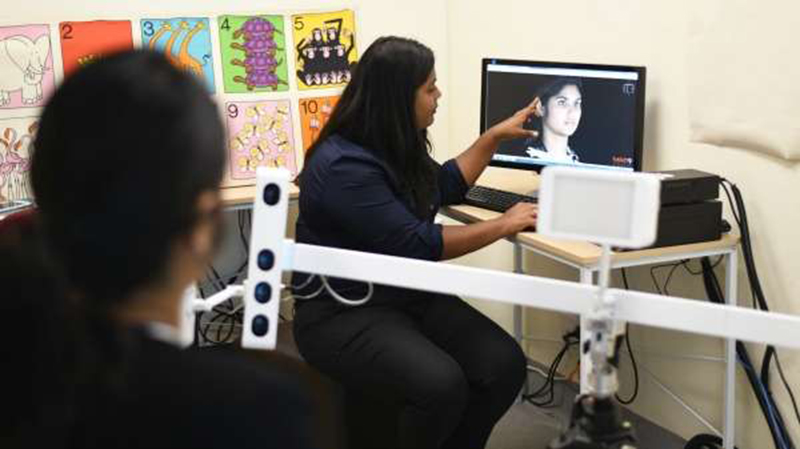 So is a masculine face an indicator of autism?

“Not necessarily, but there is this theory that higher levels of testosterone may have some effect on changing brain development in utero,” Dr. Alvares said.

Dr. Alvares said autism can currently be reliably diagnosed in children as young as two by observing their behaviours.

“The problem is that we don’t,” Dr. Alvares said. “In Australia, we diagnose on average at about age four, which is far too late for early intervention to really have its best effect. Ideally, we would like to diagnose between 12 and 24 months. We know that children who have access to early and very intensive intervention before the age of three have better cognitive and language outcomes.”

The Telethon researchers hope to compile a wider database of faces, including people who do not have ASD.

“We’ll be rolling this out at a bunch of community events and open days, so we’ll be scanning lots of families as part of the Telethon weekend that’s happening in October at the Perth Convention Centre,” Dr. Alvares said.