Dentists and surgeons are benefiting from new 3D printing applications. This is the result of a joint project of the companies Atum 3D in Tilburg and Xilloc on the Brightlands Chemelot Campus in Sittard-Geleen.

1. 3D Printing at the Dentist
Atum 3D has developed a special 3D printer enabling dentists to make dental guides. These dental guides help the dentist to drill in the correct direction and to the correct depth, meaning that dental implants can be placed with greater accuracy. This 3D printer uses DLP, digital light processing, which uses light to harden the 3D-printed material. The material which is used has to be suitable not just for 3D printing, but also for medical applications – it is biocompatible. 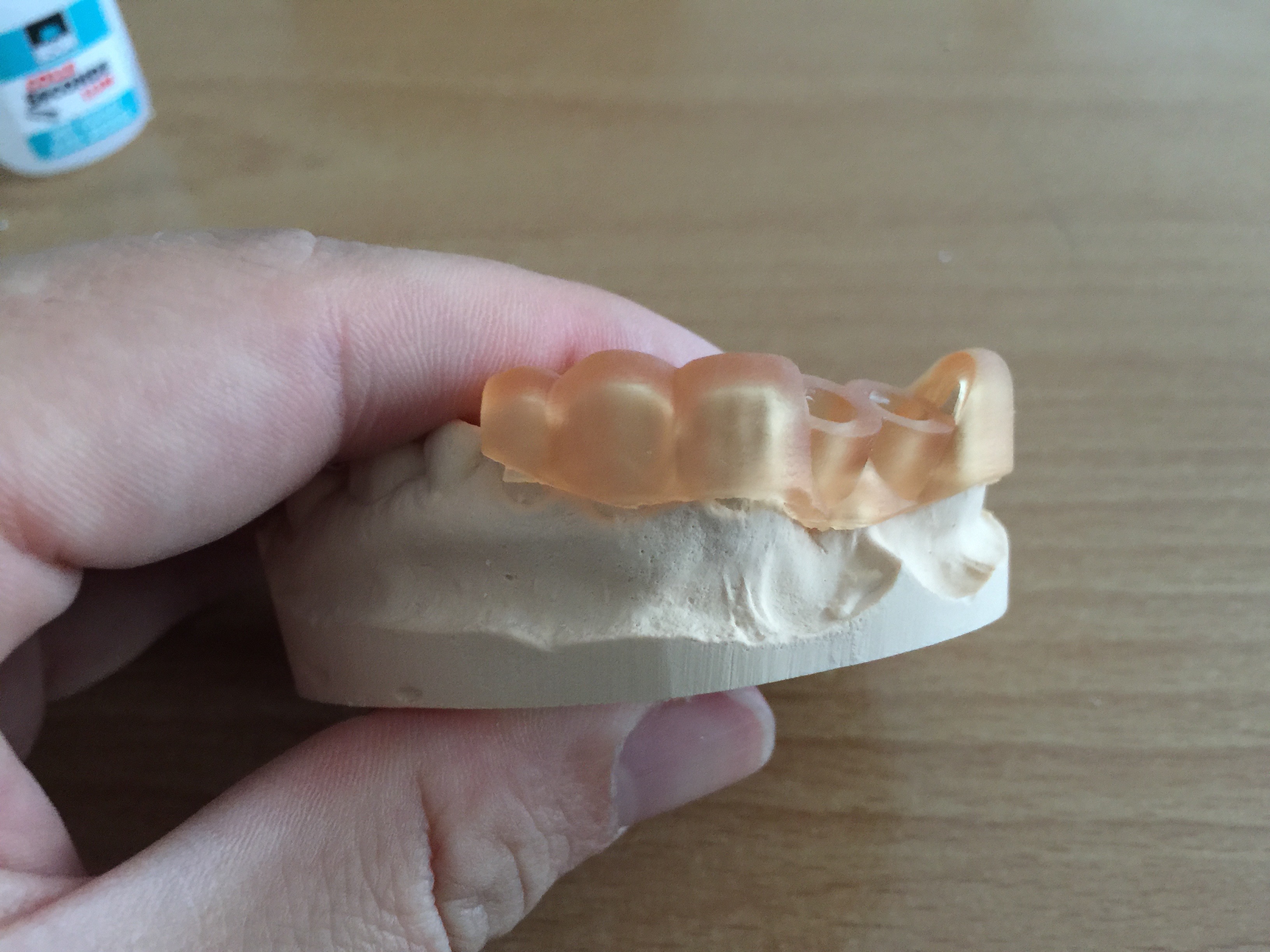 The 3D printer developed by Atum 3D is well suited to (small-scale) applications in clinics and dental surgeries. The further development of the technology is focusing on dental elements such as crowns and bridges. 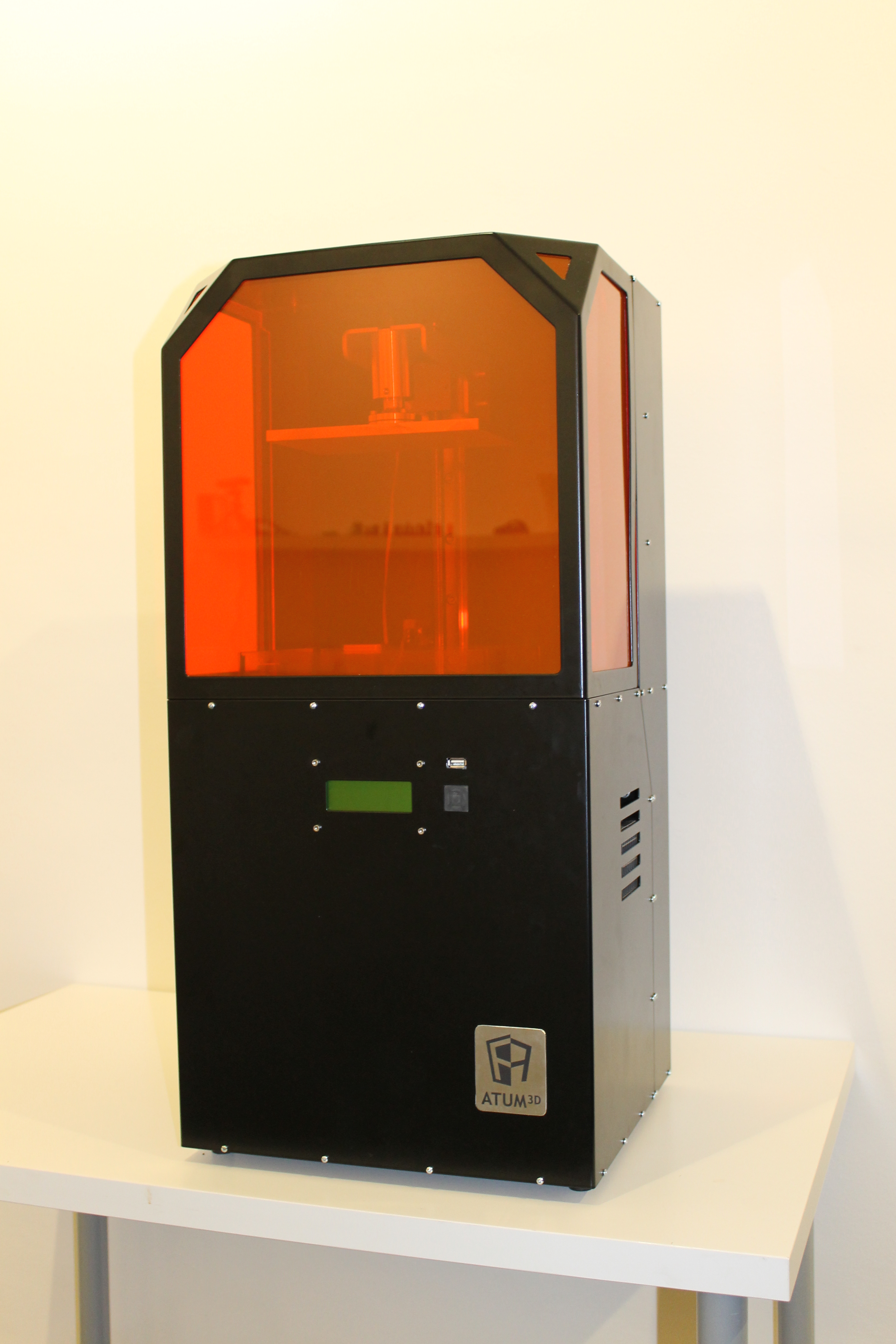 2. 3D Printing for Surgeons
Xilloc has developed a prototype surgical guide for surgical use. Such surgical guides help the surgeon to make an incision exactly where he/she had intended, which in turn results in a faster and more accurate operation for the patient. A professional 3D printer has been invested in for the production of this type of surgical guide. This is an SLS printer (selective laser sintering) from EOS (P 396), which uses a laser to melt successive layers of the material – a polyamide in powder form – onto one another. 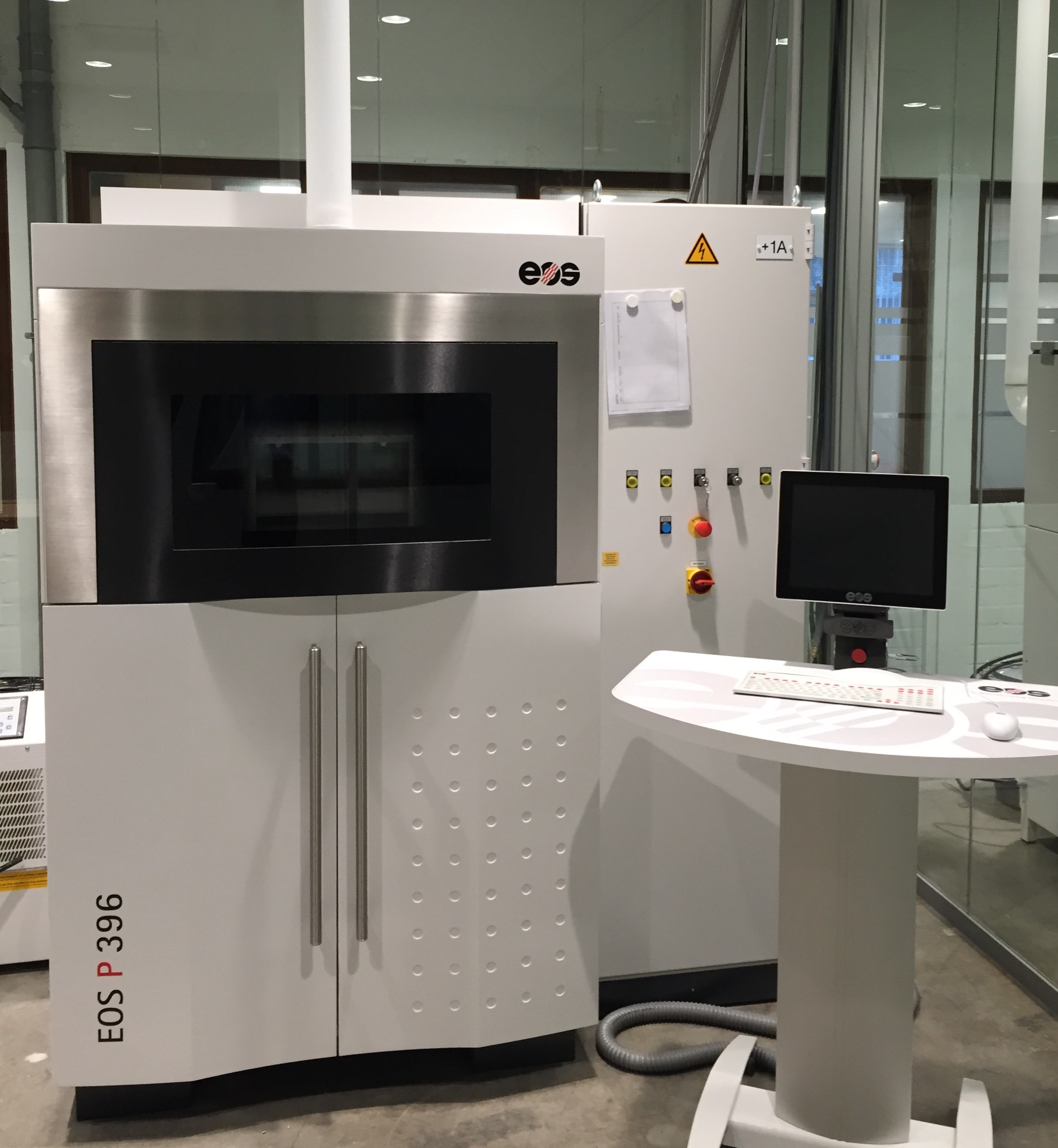 The prototype of this surgical guide is now being further developed and additional research is being conducted into different materials and applications, such as implants, under close cooperation with materials suppliers. 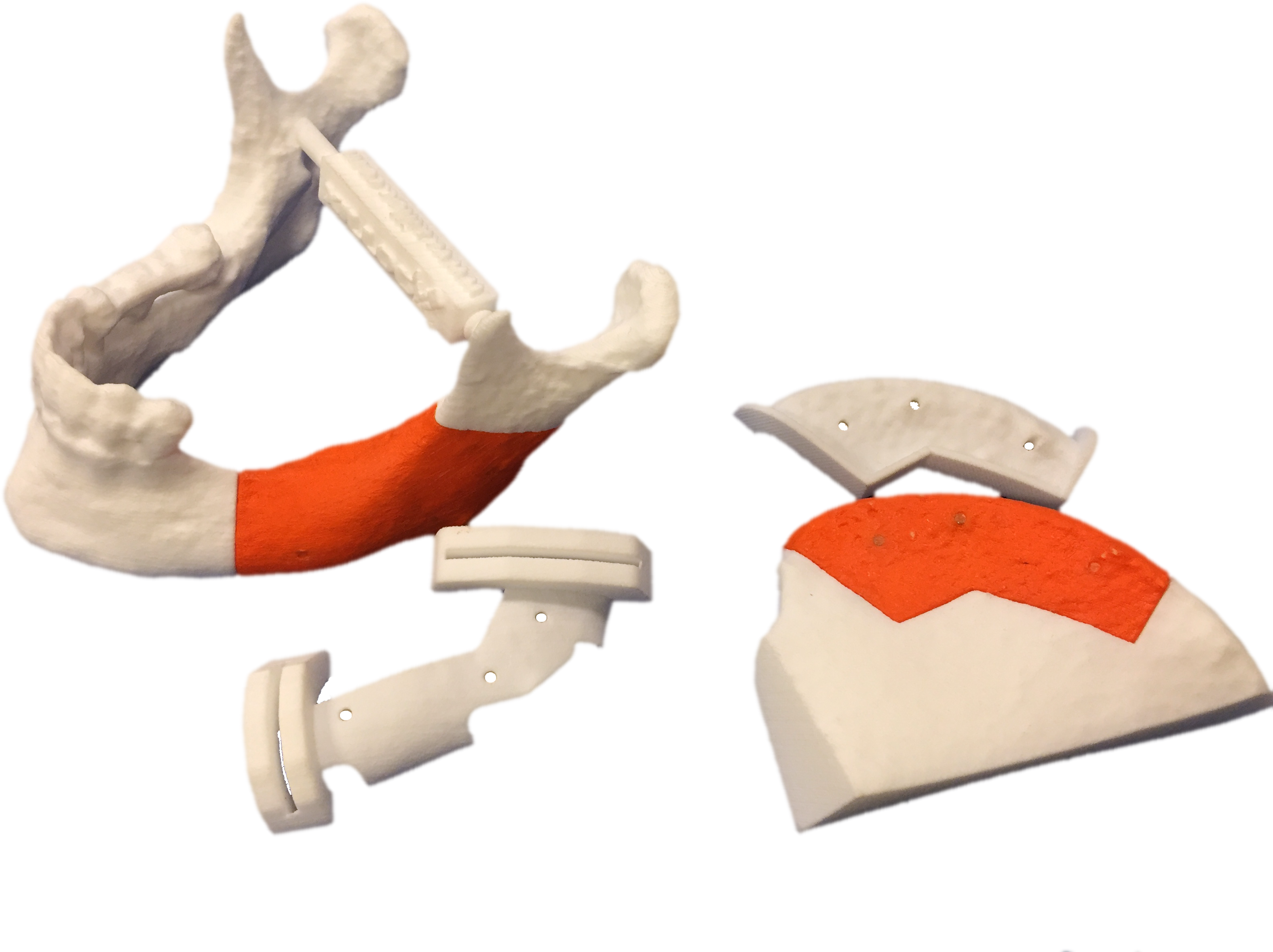 3. ADAM Project
In 2015, Atum 3D and Xilloc worked together on the Advanced Dutch Additive Manufacturing (ADAM) project. One of the other promoters is Brightlands Chemelot Campus, which invested in 3D printers and carried out the business development.

ADAM is a project of OP-Zuid (Operationeel Programma Zuid-Nederland), a European subsidy program for the south of the Netherlands. The total investment amounted to €1.8 million, of which €800,000 was an OP-Zuid subsidy paid by EFRD (European Union) and the Ministry of Economic Affairs.

The development of Brightlands Chemelot Campus is (financially) supported by the Province of Limburg. For instance, investment in the ADAM project was partly enabled by the Province via Chemelot Research Facilities. Twan Beurskens, member of the Limburg Provincial Executive for Economic Affairs and Knowledge Infrastructure: “This project has successfully brought together various parties. It proves that 3D printing, praised as a promising technology, is now delivering on these promises and that Limburg is actually reaping the benefits of developing this technology.”

Atum 3D
Atum 3D from Tilburg (NL) develops and produces 3D DLP printers. This is a unique 3D printing technique, using a projector to deposit layers in a liquid resin. With this method 3D objects can produced quickly and accurately. Atum 3D was founded in 2014 by Tristram Budel to improve and commercialize this technique in the Netherlands.

Last year, Atum 3D has made a big step in the development of 3D printing technology with the ADAM project. Within ADAM Atum 3D has developed printing with medical certified materials, with these materials guides can be printed that can be used during surgical operations. By applying these so-called drill guides operations can be planned better and executed more accurate. As a result, the risk for the patient is reduces, the recovery time for the patient is significantly shortened and the operation can be executed cheaper. These prints have successfully been used during operations for placing dental implants in patients.

Furthermore, thanks to ADAM Atum 3D has made a start with developing a super printer. This printer, affectionately called the “T-Rex”, has a print surface six times larger than the regular print surface. Not only can this printer be used for printing large objects, it can also print large numbers of small products extremely quick. The main purpose of the T-Rex is to match the production speed of injection molding for small, customized products.

Xilloc
Xilloc provides patient-specific implants for reconstructing parts of the human skeleton. The company was founded in 2011 by Maikel Beerens and builds on the first 3D-printed titanium skull implants developed by a team at Maastricht Instruments and IDEE, part of Maastricht University Medical Centre+ (MUMC+) and on his thesis. Xilloc developed the first 3D-printed titanium lower jaw, and will soon also be 3D printing real bone.

Over the past year, Xilloc also launched an Industrial division which provides 3D-printed parts to clients in sectors such as aviation and the automobile industry. Xilloc has a team of 10 employees and is based on the Brightlands Chemelot Campus.

Brightlands Chemelot Campus
Brightlands Chemelot Campus is a hub for research and development, and for education in the fields of chemistry and materials, and related life sciences. The themes are high-quality materials, biomedical materials and biobased materials. The campus is developing into a creative breeding ground for innovation and new businesses, with thousands of highly educated employees. The dynamic is the result of the cooperation between business, educational and knowledge institutions, and the government. The campus plays an active role, including by stimulating the construction of pilot plants and accelerating the development of new businesses.

Chemelot Campus works together with Maastricht Health Campus and Campus Greenport Venlo under the name Brightlands; the three campuses are situated in Limburg. Brightlands is also connected to the research program of the University of Maastricht, Zuyd University of Applied Sciences and the province of Limburg.

OP-Zuid
The Operationeel Programma Zuid-Nederland (OP-Zuid) is a joint subsidy program of the provinces of Zeeland, North Brabant and Limburg, together with the cities of Breda, Tilburg, ‘s Hertogenbosch, Eindhoven, Helmond, Venlo, Sittard-Geleen, Heerlen and Maastricht. It is an economic incentive program which has received nearly €186 million of funding from the European Fund for Regional Development (EFRD) and €46 million from the Ministry of Economic Affairs. The main aims of OP-Zuid are to promote competitiveness and sustainable growth and to boost employment in the south of the Netherlands.