Researchers from the Moscow Institute of Physics and Technology (MIPT), the Engelhardt Institute of Molecular Biology (EIMB RAS), the Institute of Bioorganic Chemistry (IBCh) and a number of other Russian research centers have developed a new method of diagnosing colorectal cancer. The results of the study have been published in Cancer Medicine.

The scientists have created a hydrogel-based biochip to help detect bowel cancer i.e. colorectal cancer (CRC). CRC is the third most common type of cancer and it develops with minimal clinical symptoms in the early stages. Despite doctors’ efforts, the 5-year survival rate does not exceed 36%. Treatment is only effective, and patients only have a good chance of recovery, if the cancer is detected early. 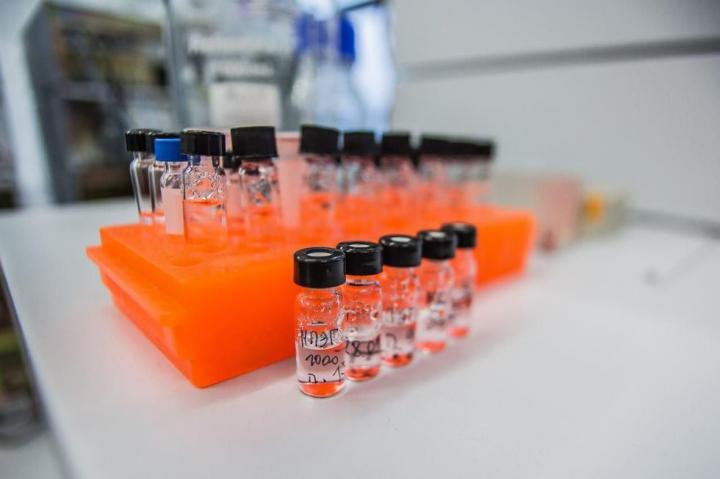 Diagnostic methods that are currently in use are not sufficient. Analyses carried out in vitro have low specificity and invasive studies such as colonoscopy are not only traumatic, but they are also not always suitable for an early diagnosis, as they do not give a complete picture of the development and distribution of colorectal cancer.

The method proposed by scientists from EIMB RAS, MIPT, the Russian Scientific Center of Surgery, Sechenov First Moscow State Medical University, the Institute of Bioorganic Chemistry, and Buyanov City Clinical Hospital is based on the simultaneous detection of various substances in patients’ blood. These substances are autoantibodies against tumor-associated glycans, which can be found in serum at the early stages of cancer, immunoglobulins of different classes, and oncomarkers (molecules produced by tumor cells).

What?
Oncomarkers are already widely used to detect cancer. However, the combination which is used to detect CRC (carcinoembryonic antigen (CEA) with carbohydrate antigen (CA) 19-9) is not sensitive enough and is only able to detect 1 in 2 cases of the disease. To increase diagnostic sensitivity, researchers turned to glycobiology, a rapidly developing science that is focused on the most important biological molecules – glycans.

The best known glycans are amylum, chitin and cellulose. In terms of chemistry, glycans are biopolymers consisting of a large number of monosaccharides (glucose and fructose are commonly known examples) linked glycosidically (by oxygen atoms). Besides acting as nutrients and building materials for cells, glycans are important for the contact between cells, appropriate organ growth and much more. Tumor cells have special glycans enabling scientists to differentiate them from healthy cells, and this is the key aspect of the new study.

To detect tumor-associated glycans, scientists use autoantibodies. Antibodies are molecules produced by the immune system to attack enemy cells with high precision. They are “fine-tuned” to interact with a particular target. Antibodies against the influenza virus, for example, interact only with the protein contained in the viral particles of a certain strain, and autoantibodies against tumor-associated glycans react exclusively with glycans that are only found in CRC cells.

Antibodies are able to define target cells and initiate the process of destroying them. Any cells may become a target if they have transformed to cancer cells or become infected with a virus. Many laboratory diagnostic methods and scientific experiments are based on the unique capacity of antibodies to selectively detect other molecules.

How?
The researchers proposed looking for autoantibodies against tumor-associated glycans in serum. The method has already demonstrated its potential in the diagnosis of ovarian cancer (Swiss scientists published the corresponding paper in 2012) with biological microchips used as the primary diagnostic tools.

The idea of using microchips was first suggested in the 1980s by Andrei Mirzabekov, who was the head of the Institute of Molecular Biology and MIPT’s Department of Molecular Biophysics. Today, this idea is said to be the technical basis for the biology of the 21st century. A microchip is normally a flat plate containing samples of particular biological molecules, however in their new paper the researchers examined a new development – a three-dimensional hydrogel-based biochip.

These chips were developed at EIMB RAS. They are 3D cells made of a special gel which contains the required reagents – molecular probes. The structure of the gel provides an optimal environment for conducting tests, and the scientists were able to solve a number of problems to ensure more accurate diagnoses – e.g. they achieved equal distribution of molecular probes with a far greater sensitivity than regular “flat” systems (or “planar” systems, as specialists call them).

What Were the Results?
The researchers developed a model of the test-system which is able to simultaneously measure the concentration of protein-based oncomarkers, the autoantibodies-to-glycans ratio, and immunoglobulins IgG, IgA, and IgM in a patient’s blood. Taking into account the fact that most protein-based markers are not specific in terms of the location and type of the tumor, scientists divided them into groups – diagnostic and prognostic signatures (combinations of protein-based oncomarkers and antibodies to glycans etc.)

Using the model, the scientists analyzed the sera of 33 patients with colorectal cancer, 69 healthy donors and 27 patients with inflammatory bowel disease. Cases like Crohn’s disease and diverticulitis may in the long term lead to colorectal cancer, however, they should not be confused with one another when diagnosing the disease – the laboratory analysis system needs to not only be sensitive, but also precise.

This method surpasses all other existing methods. The model of the test-system based on diagnostic signatures was able to diagnose CRC in 95% of cases, compared to 79% detected by traditional methods. The sensitivity of CRC detection (in patients with Stage II-IV CRC) was 87% versus 21%. This increase is clearly a significant achievement. The specificity of the method is 97%.

The sensitivity of a diagnostic method is its capacity to detect a disease. The higher the sensitivity, the better the results, but sensitivity on its own is not enough to make a diagnosis. The tests must also be correct in cases of another diagnosis, i.e. if there is no cancer, the results should not say that there is cancer.

The first figure of 95% is the ability to accurately predict the diagnosis, which means that the disease will be diagnosed correctly for 95 patients out of 100. The sensitivity of 87% tells us that the method will detect CRC in 87 out of 100 cases of patients with the disease. The traditional method of detecting CRC has a sensitivity of 21%, which means that a number of patients with CRC will be declared healthy. In patients with inflammatory bowel disease, cancer will be correctly diagnosed in 97% of cases.

“The method developed at EIMB RAS has great potential to be used in diagnosing gastrointestinal diseases. We hope that testing systems based on the method will soon appear in clinical laboratories in Russia,” says Zhanna Zubtsova, one of the authors of the new method, Ph.D. in Physics and Mathematics, assistant professor at MIPT.