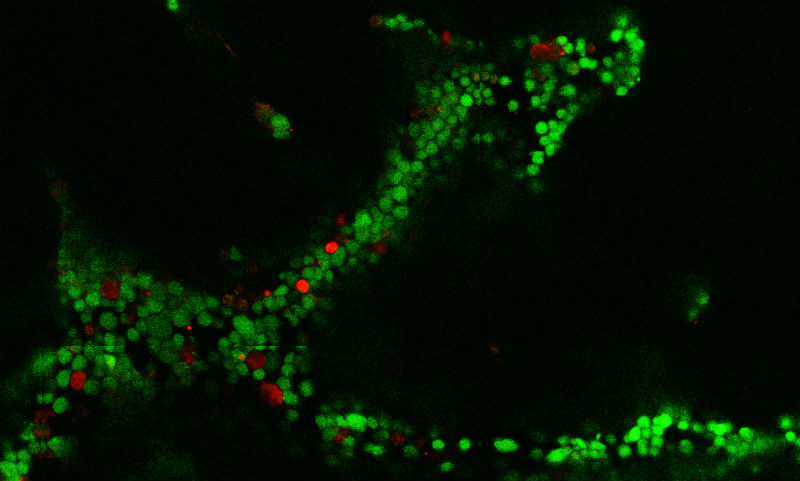 B cell lymphomas grow in organoids as clusters, similar to those in patients. The green fluorescent areas represent lymphoma cells, while the red represents support stromal cells. (Credit: Cornell University)

Cornell researchers have engineered a 3D lymphoma organoid – a tissue culture that mimics the complex environment of lymphomas allowing scientists to study non-Hodgkin lymphomas – a technology that promises to rapidly advance our understanding and treatment of these tumors.

Until now, studying and developing drugs for non-Hodgkin lymphomas – tumors of B and T immune cells – has been a challenge. That’s because these lymphomas are complex tumors formed by a variety of malignant and non-malignant cells that cannot be adequately studied by traditional methods. Moreover, patient samples do not survive outside of the body, thereby limiting research.

The new study, recently published online in the journal Biomaterials, describes how these organoids offer biologically realistic models to test new drugs, an important development that will help to understand why some lymphomas are unresponsive to drugs.

That’s partly because studies using current methods to test such drugs, such as 2-D systems, fail to adequately replicate tumor microenvironments and often yield false results or do not supply enough information to fully understand the mechanisms behind these cancers.

“This is a game-changing technology for the field of lymphoma,” Melnick said. “These organoids allow us to better understand the complex architecture of lymphomas and how that informs the way we treat the disease – what drugs we should use and for whom, and how they interact with each other. This is a fundamental advance; no one in the world has the technology to treat patients in this way.”

In a separate study, this group and collaborators determined that T-cell lymphomas express a very unique class of integrin molecules, which are receptors that bridge cells and their external environments.

“If you block the integrin pathway it will lead to tumor cell death in patient-derived lymphomas,” Singh added.

Three-dimensional organoids recreate a realistic environment for integrins and signaling cells called stromal cells, which are both necessary for studying lymphomas. Also, B- and T-cell lymphomas express different types of integrins but 3D organoids provide a flexible, modular system to study them, Singh said

The organoid is made by creating cell cultures of immune, support and lymphoma cells that form clusters inside a synthetic hydrogel. The researchers may then add drugs on top of these organoids. The drugs enter the gel and interact with the cells, which are then removed for quantitative analysis to see whether they died or proliferated, and to study their surface molecules. The researchers used the 3D organoids to reveal that the tumor microenvironment contributes to resistance to chemotherapies and a new drug called Panobinostat.

“It is impossible to predict from standard culture techniques, that lack of microenvironment signals and cells, how these drugs will behave in patients,” Cerchietti said. “Moreover, these new drugs are slow-acting and must be administered for significant longer times than classical chemotherapy agents, something that can only be done in 3D lymphoma organoids.”

The investigators say they are about a year away from seeing the tangible effects of this technology, and they are already generating data that will inform future clinical trials.

The lymphoma organoids are a part of the P.A.Th. (Progressive Assessment of Therapeutics) program, an inter-campus endeavor to translate better treatments to lymphoma patients.

The study was funded by the National Institutes of Health, the Cornell and Weill Cornell Medicine Seed Grant Program, and Cornell’s Engineering Learning Initiative Grant.