To make a good framework for filling in missing bone, mix at least 30 percent pulverized natural bone with some special man-made plastic and create the needed shape with a 3D printer. That’s the recipe for success reported by researchers at The Johns Hopkins University in a paper published April 18 online in ACS Biomaterials Science & Engineering.

Each year, the Johns Hopkins scientists say, birth defects, trauma or surgery leave an estimated 200,000 people in need of replacement bones in the head or face. Historically, the best treatment required surgeons to remove part of a patient’s fibula (a leg bone that doesn’t bear much weight), cut it into the general shape needed and implant it in the right location. But, according to Warren Grayson, Ph.D., associate professor of biomedical engineering at the Johns Hopkins University School of Medicine and the report’s senior author, the procedure not only creates leg trauma but also falls short because the relatively straight fibula can’t be shaped to fit the subtle curves of the face very well. 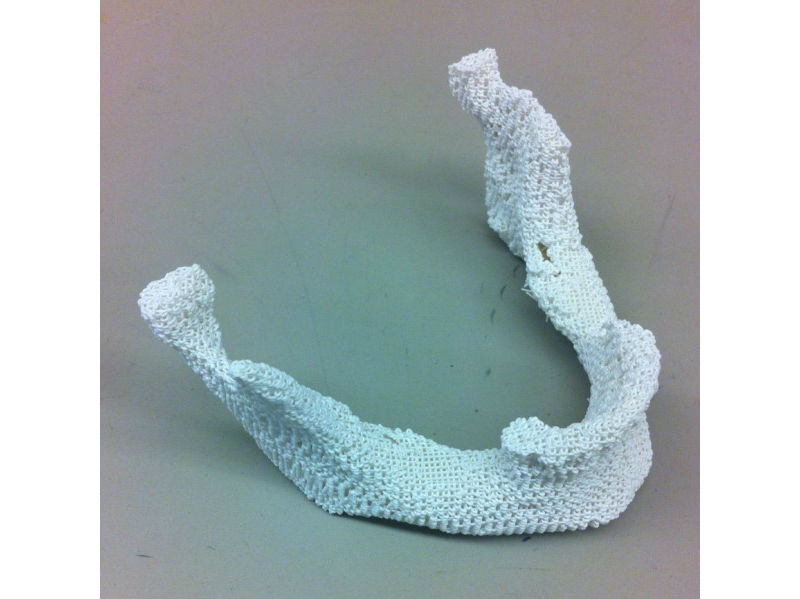 That has led investigators to 3D printing, or so-called additive manufacturing, which creates three-dimensional objects from a digital computer file by piling on successive, ultrathin layers of materials. The process excels at making extremely precise structures — including anatomically accurate ones — from plastic, but “cells placed on plastic scaffolds need some instructional cues to become bone cells,” says Grayson. “The ideal scaffold is another piece of bone, but natural bones can’t usually be reshaped very precisely.”

In their experiments, Grayson and his team set out to make a composite material that would combine the strength and printability of plastic with the biological “information” contained in natural bone.

They began with polycaprolactone, or PCL, a biodegradable polyester used in making polyurethane that has been approved by the FDA for other clinical uses. “PCL melts at 80 to 100 degrees Celsius (176 to 212 Fahrenheit) — a lot lower than most plastics — so it’s a good one to mix with biological materials that can be damaged at higher temperatures,” says Ethan Nyberg, a graduate student on Grayson’s team.

PCL is also quite strong, but the team knew from previous studies that it doesn’t support the formation of new bone well. So they mixed it with increasing amounts of “bone powder,” made by pulverizing the porous bone inside cow knees after stripping it of cells.

“Bone powder contains structural proteins native to the body plus pro-bone growth factors that help immature stem cells mature into bone cells,” says Grayson. “It also adds roughness to the PCL, which helps the cells grip and reinforces the message of the growth factors.”

To find out whether the scaffolds encourage bone formation, the researchers added human fat-derived stem cells taken during a liposuction procedure to scaffolds immersed in a nutritional broth lacking pro-bone ingredients.

Finally, the team tested their scaffolds in mice with relatively large holes in their skull bones made experimentally. Without intervention, the bone wounds were too large to heal. Mice that got scaffold implants laden with stem cells had new bone growth within the hole over the 12 weeks of the experiment. And CT scans showed that at least 50 percent more bone grew in scaffolds containing 30 or 70 percent bone powder, compared to those with pure PCL.

Although the use of “decellularized” cow bone has been FDA-approved for clinical use, in future studies, the researchers say, they hope to test bone powder made from human bone since it is more widely used clinically. They also want to experiment with the designs of the scaffolds’ interior to make it less geometric and more natural. And they plan to test additives that encourage new blood vessels to infiltrate the scaffolds, which will be necessary for thicker bone implants to survive.