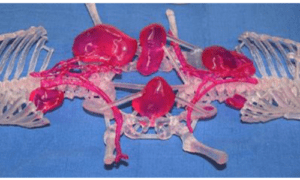 As 3D visualization and printing technologies improve, healthcare providers are able to plan for and increase the success of difficult surgeries. 3D Systems has a precision healthcare solutions team that provides simulation, surgical planning, and manufacturing.

The team was recently involved in a rare case, in which conjoined twins were born as part of triplets. One child had a normal birth, but two of the triplets were fused from the navel down. The twins shared a colon and half of their uterus on each side. The babies’ kidneys went to the opposite baby’s bladder, so surgeons would have to reroute them to go to the correct organ.

Surgical planning took several months. Doctors had to study the shared anatomy to figure out the best way to separate the infants and reorient vital organs, skin, bones and muscle to ensure each girls survival. 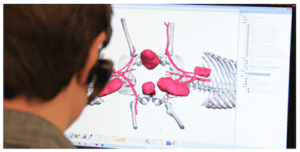 Once the surgeons had a plan, they shared CT scan data and information to 3D Systems. 3D Systems took the CT scans of the twins and translated them into a 3D digital environment, enhancing the relevant parts of the anatomy, simulating the surgical procedures. The process was challenging because some of the organs were difficult to identify and were either in unexpected locations or shared between the twins.

The team then met with surgeons to share the visualization of the operating plan.  The surgical team realized, with that visualization, that one of the kidneys was lower in the pelvis than doctors had originally thought. Then They translated the digital models into 3D printed anatomical models so that surgeons could further plan where to make cuts and how to position the patients.

The two physical models were produced using a 3D Systems ProX 800 stereolithography (SLA) printer. 3D Systems used a translucent plastic material in one of the anatomical models to accurately depict the skeleton. Major vasculature and organs involved in the separation procedures were highlighted in color. The other model was printed in a white plastic material to depict the surface of the skin, that is to add realistic opacity to show skin contours.

Both models could be cleaned, sterilized and taken into the operating room for live reference during the surgery.

The entire 3D Systems work took less than a month. The actual surgery required 12 hours, although surgeons had predicted a 20-hour session. The operation was deemed a success, with the advance planning cited as a major factor.

Surprisingly (or perhaps not surprisingly), this isn’t the only example of 3D printing being used to help separate conjoined twins, even in the last month. In Minnesota, twins conjoined at the chest, with fused livers and connected hearts, got aid from 3D models of the organs to help pediatricians plan for the surgical separation. 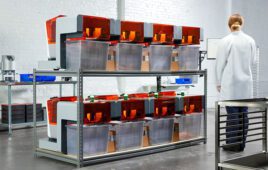 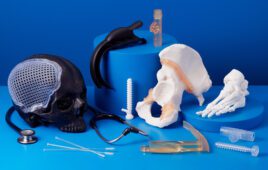