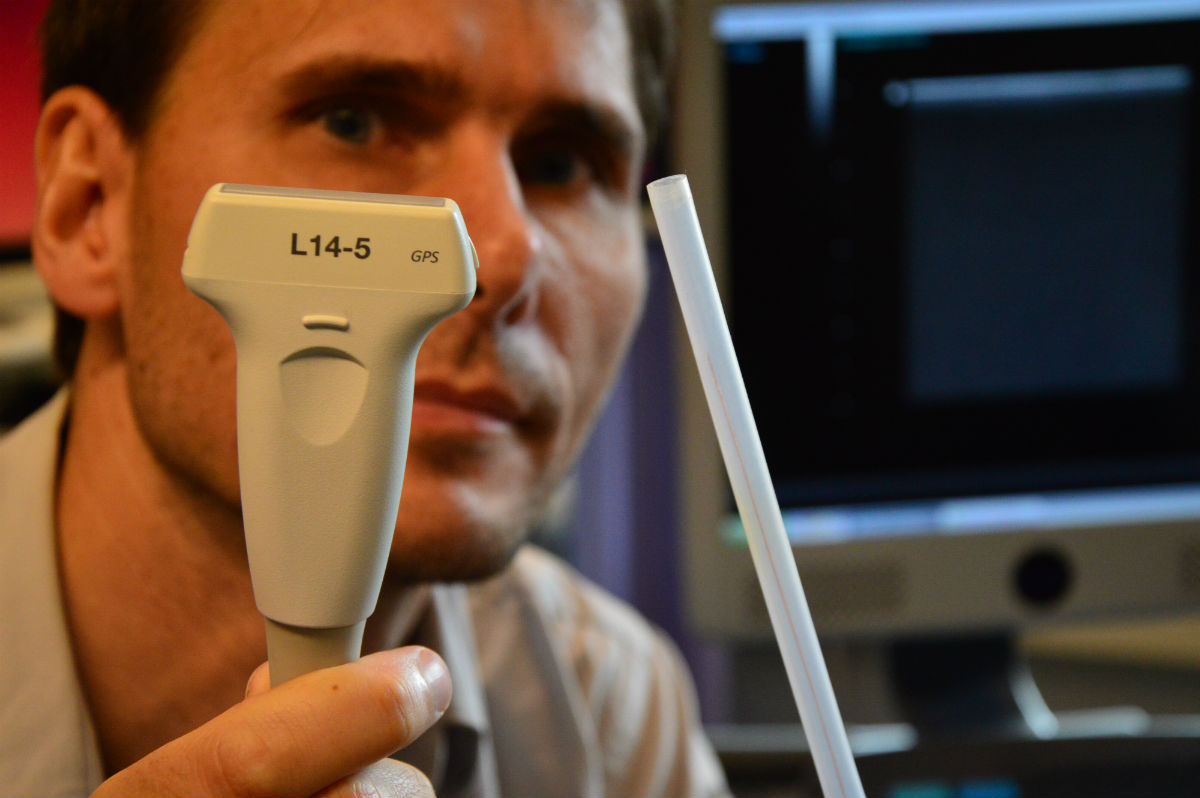 SINTEF researcher Frank Lindseth emphasizes that this tool is intended to act as an assistant and a guide during the ultrasound-guided insertion of the needle. It is not a robot. (Credit: Kathinka Høyden)

Ultrasound technology will soon be helping doctors to anesthetize patients more accurately. And the technology is being developed in Trondheim, Norway.

Ultrasound is being used in an increasing number of medical contexts, including diagnostics, treatment and examinations. Imaging techniques are also being used during narcosis in a process called ‘ultrasound-guided regional anesthesia’, during which a greater part of the patient’s body is anesthetized prior to an operation. This involves a doctor injecting the anesthetic directly around the key nerves in question.

Ultrasound-guided regional anesthesia is a preferred approach in many cases because it can spare the patient unnecessary narcosis, and ensures that the anesthetic is applied correctly and the subsequent operation carried out with the least possible pain and discomfort to the patient. If this also results in shorter hospital stays, then society as a whole also benefits.

Assisting Interpretation
However, the technique requires a high degree of accuracy. For this reason, researchers at SINTEF are currently developing software that can assist doctors in interpreting ultrasound images in real time with the help of 3D images – in this case involving regional anesthesia of the main nerve running through the thigh. The aim here is to achieve precision within a few millimeters of the target.

SINTEF researcher Frank Lindseth emphasizes that this tool is intended to act as an assistant and a guide during the ultrasound-guided insertion of the needle. It is not a robot.

In order to understand ultrasound images, they must be closely examined and interpreted, and this is a very demanding task requiring detailed knowledge and experience. And it doesn’t suit everyone. Many doctors attempt to learn the procedure, but never get as far as performing an injection because they encounter major problems in interpreting the ultrasound images. Moreover, interpretations vary even among experts, in spite of their many years of experience.

The Ultrasound Reference Model
Thus the work that Lindseth and his team have carried out has included generating a reference model describing how images of the human body should be interpreted based on the somewhat cryptic ultrasound images. This has been carried out in close collaboration with doctors at St. Olav’s University Hospital in Trondheim.

Kai F. Johansen is a Senior Consultant at the Orthopedic Unit at St. Olav’s and has been a key figure in the development of the SINTEF software. He will soon be testing the assistant at the hospital.
His work has involved locating and tracing the body’s so-called ‘anatomical landmarks’ – that is to say key structures within the body as displayed on the ultrasound images during anesthesia.

An Excellent Aid
“The challenge doctors face when interpreting ultrasound images is finding what they’re looking for”, says Lindseth. “Their task is to navigate on the basis of known anatomical landmarks within the body – in this case to locate the right nerve so that they can accurately position the needle. This applies both to anesthesia and pain relief procedures. Our findings show that even among the experts there is a great deal of variation when it comes to interpreting the ultrasound images and accurately locating structures within the body”, he says.

Johansen believes that an ultrasound guide such as this will become an excellent aid to doctors.

“The assistant will be very useful for training doctors in the interpretation of ultrasound images”, he says. “Anatomical landmarks such as blood vessels and membranes are key aids in identifying ultrasound-guided nerve blocks. If you can spot these on the ultrasound images, it becomes easier to localize the nerve that has to be anesthetized,” explains Johansen.

“One particular challenge has been the variation in the interpretations made by experts”, he says. “This makes it more difficult to establish a reference model to which the assistant can attempt to find matches. This also says something about the level of difficulty involved in developing a robust, entirely automatic and real time system”, adds Lindseth.

3D-Guided Injection
By using the reference model as a template, the team has developed a software program that will be installed in ultrasound machines to act as a guide and assistant during the use of ultrasound on patients. A sensor in the ultrasound probe communicates its position using the program, which then displays 3D images of key anatomical landmarks, and subsequently interprets what it is being revealed by the ultrasound signals. Furthermore, it will be possible to follow the progress of the needle to precisely the location where the injection is required.

The entire process is complicated by the fact that humans refuse to be standardized. We are all different, and some of us are more different than others.

“There can be enormous anatomical differences from patient to patient”, says Lindseth. “So it isn’t difficult to imagine that this is a challenging project”, he says.

Ever-Increasing Need
“Sooner or later, the need for this type of assistant will begin to increase”, explains Lindseth. “Knowledge and experience linked to the interpretation of ultrasound images will be in ever-greater demand once ultrasound is applied in an increasing number of new procedures. Our task is to develop this into a user-friendly tool”, he says.

There are many different regional anesthesia procedures, and all of them require an ultrasound assistant. If SINTEF’s system is well received, the development of assistants for the remaining procedures will also become a hot topic.

Early next year, the program will be the subject of clinical tests carried out by experts in the Netherlands, Ireland and Germany.