A paper published this week in the journal Optics Express, from The Optical Society (OSA), describes a new type of portable, field-friendly, mid-infrared detector that operates at room temperature.

Because infrared detectors can be “blinded” by their own heat, high-quality infrared sensing and imaging devices are usually cooled down, sometimes to just a few degrees above absolute zero. Though they are very sensitive, the hardware required for cooling renders these instruments less-than-mobile, energy-inefficient and limits in-the-field applications.

Room-temperature operation, noted Andreas Harrer of the TU-Wien Center for Micro- and Nanostructures, Austria and the first author of the paper, “is essential for detectors to be energy-efficient enough for portable and handheld applications. We want to pave the way to an infrared-detection technology which is flexible in design and meets all requirements for compact integrated field-applicable detection systems.”

The type of instrument developed by Harrer and his colleagues is known as a quantum cascade detector, or QCD. A QCD is a high-speed detector composed of semiconductor devices that sense specific wavelengths of infrared light and convert that light into proportionate electrical signals. A unique aspect of the design described by Harrer and his colleagues is that it consists of an 8 x 8 array of pixels, each approximately 110 microns square. Tuning is achieved by specifically adjusting the well and the barrier dimensions to a wavelength of 4.3 microns. 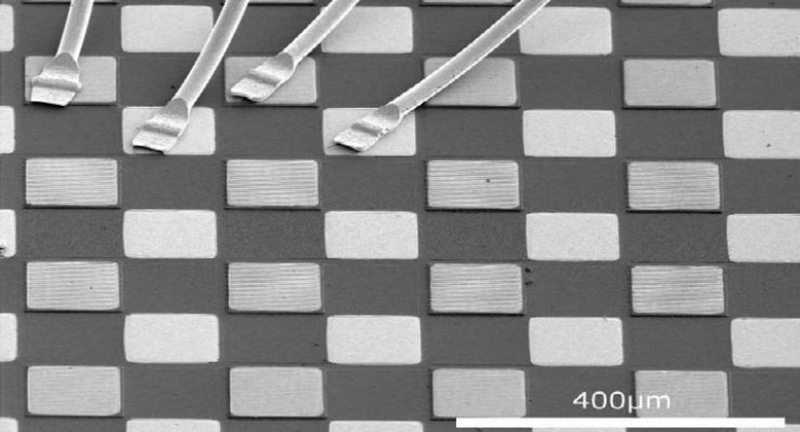 A quantum cascade detector is a high-speed detector composed of semiconductor devices that sense specific wavelengths of infrared light and convert that light into proportionate electrical signals. (Credit: Andreas Harrer)

The number of pixels used in the QCD, Harrer said, can be easily scaled up.

“The growth and processing technology used can be adapted and extended to larger array dimensions and smaller pixel sizes,” he said. “This is essential to achieve cost-effective high resolution imaging devices in the future.”

The 4.3-micron wavelength detected by the QCD elements represents one of the three narrow wavelengths at which CO2 molecules absorb infrared radiation. Future applications envisioned for the device is with “unmanned search and rescue robots that detect disaster victims, for example, based on the CO2 content of their exhaled breath,” Harrer said.

The 4.3-micron wavelength also falls within the so-called mid-infrared regime, which is also referred to as the chemical “fingerprint” region of the electromagnetic spectrum. The rotational-vibrational absorption spectra of many chemical compounds are found within this wavelength range.

In other words, when molecules absorb infrared radiation that falls within this wavelength range, they excite these molecules to a higher state of vibration, wherein they rotate and vibrate in distinctive, characteristic patterns—“fingerprint” patterns that can be used to identify particular chemical species. This identification is very exact, and will be enhanced through the use of these QCD detectors.

The potential for enhanced detection in remote sensing at 4.3 microns is promising with the spectrally narrowed QCDs described by Harrer and colleagues.