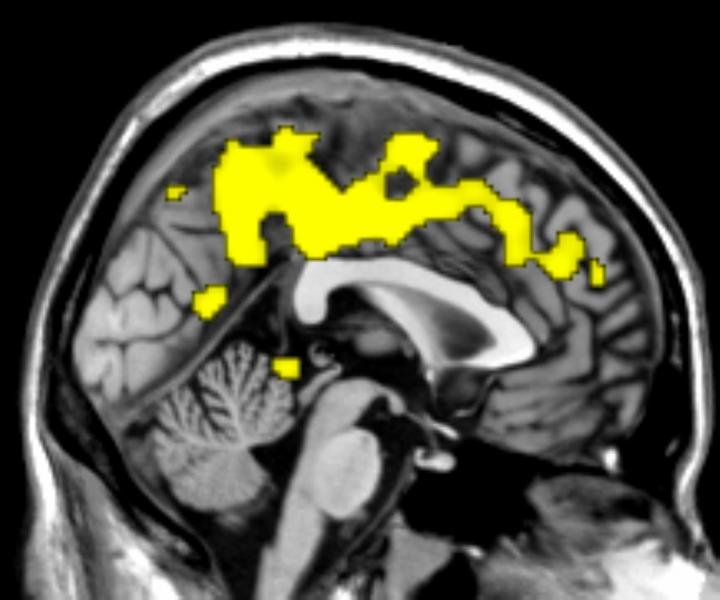 This image shows an fApEn on brain. (Credit: SISSA)

Do not be misled by the word “fuzzy”: Fuzzy Approximate Entropy (fApEn) is a method that offers better sensitivity for understanding the complexity of noisy images produced by functional magnetic resonance imaging (fMRI). fMRI is a medical imaging technique which, when applied to the brain allows us to non-invasively observe neural activity associated with specific human behavior . However, just “looking” at these images is not enough to understand what is going on, and different methods exist that analyze, filter and reconstruct the signals to enable scientists to understand the brain’s complex activity.

fApEn has been used to analyze electrocardiograms, electroencephalograms and electromyograms, but this is the first time it is used with fMRI because 3D fMRI computation is complex. “Until now scientists have preferred to use a reliable method, Sample Entropy (sampEn), which, however, suffers several limitations”, explains Moses Sokunbi, research scientist at the International School for Advanced Studies (SISSA) in Trieste and first author of the study. “In this paper we demonstrated not only that fApEn can indeed be used but that compared with sampEn analysis on the same recordings, it gave superior results which were not detected by SampEn “.

“The advantage of fApEn is that it’s a non-linear method”, Sokunbi points out. “All too often, in fact, data from the brain are analyzed using linear methods, but the brain is a complex system that produce signals that are non-linear and dynamic in nature and analyzing with these linear methods results in loss of information “.

The Older the Brain, the Less Complex It Becomes
The non-linear fApEn method was used to test a hypothesis regarding brain activity. “We tested the fMRI data of 86 healthy individuals with age ranging between 19 and 85 years”, explains Sokunbi. “The complexity of brain activity is thought to decrease over the years: a young adult brain is more complex than an older adult brain. This hypothesis is supported by several observations so we decided to test it by scanning the brains of individuals of varying age with functional magnetic resonance imaging and analysing the data both with fApEn and SampEn.”

fApEn showed better signal detection in comparison to SampEn. With sampEn there was a tendency in the direction predicted by the hypothesis, but this was not significant. In contrast, fApEn analysis on the same data provided a clear and significant tendency in the expected direction.”