Cells in nearly any part of the body can become cancerous and transform into tumors. Some, like skin cancer, are relatively accessible to treatment via surgery or radiation, which minimizes damage to healthy cells; others, like pancreatic cancer, are deep in the body and can only be reached by flooding the bloodstream with cell-killing chemotherapies that, ideally, shrink tumors by accumulating in their ill-formed blood and lymph vessels in higher amounts than in vessels of healthy tissues. To improve the low efficacy and toxic side effects of chemotherapies that rely on this passive accumulation, a team of researchers at the Wyss Institute at Harvard University, Boston Children’s Hospital, and Harvard Medical School has developed a new drug delivery platform that uses safe, low-energy ultrasound waves to trigger the dispersal of chemotherapy-containing sustained-release nanoparticles precisely at tumor sites, resulting in a two-fold increase in targeting efficacy and a dramatic reduction in both tumor size and drug-related toxicity in mouse models of breast cancer. This research was recently published in Biomaterials. 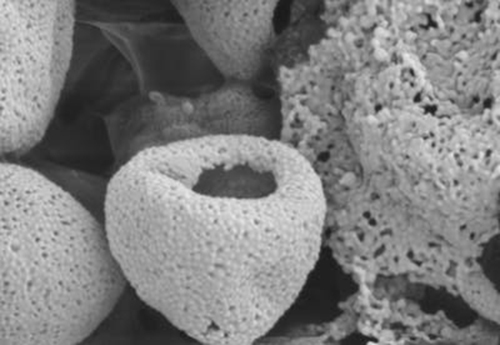 “We essentially have an external activation method that can localize drug delivery anywhere you want it, which is much more effective than just injecting a bunch of nanoparticles,” says co-first author Netanel Korin, Ph.D., former Wyss Technology Development Fellow and current Assistant Professor at the Israel Institute of Technology.

The key to this new method is the creation of nanoparticle aggregates (NPAs), which are tiny structures consisting of drug-containing nanoparticles surrounded by a supportive matrix, akin to the berries suspended in a blueberry muffin. Like chefs trying to craft the perfect pastry, the researchers experimented with a variety of nanoparticle sizes and nanoparticle-to-matrix ratios to create NPAs that are stable enough to remain intact when injected, but also finely tuned to break apart when disrupted with low-energy ultrasound waves, freeing the nanoparticles that then release their drug payloads over time, like blueberries slowly leaking their juice.

Next, the researchers repeated the experiments with nanoparticles containing doxorubicin (a common chemotherapy drug used to treat a variety of cancers) and found that the NPAs resulted in a comparable level of cancer cell death, demonstrating that NPA encapsulation did not negatively impact the efficacy of the drug.

“Locking nanoparticles up in NPAs permits precise delivery of an army of nanoparticles from each single NPA directly to the tumor in response to ultrasound, and this greatly minimizes the dilution of these nanoparticles in the bloodstream,” says Anne-Laure Papa, Ph.D., co-first author and Postdoctoral Fellow at the Wyss Institute. “Additionally, our ultrasound-triggered NPAs displayed distribution patterns throughout the body similar to the FDA-approved PLGA polymer nanoparticles, so we expect the NPAs to be comparably safe.”

NPAs were also shown to limit the “burst release” commonly observed in nanoparticle drug delivery, in which a significant number of them break open and release their drug soon after injection, causing an adverse response around the site of injection and reducing the amount of the drug that gets to the tumor. When applied to cancer cells in vitro, loose nanoparticles released 25% of their drug payload within five minutes of being administered, while the nanoparticles contained within intact NPAs released just 1.8% of their drug. When ultrasound was applied, an additional 65% of the drug was released from the NPAs compared with loose nanoparticles, which only released an additional 11%.

The team says additional research could further improve the performance of ultrasound-sensitive NPAs, making the platform an attractive option for safer, more effective chemotherapy delivery. It could be made even more powerful through combination with other tumor-targeting strategies such as using peptides that home to the tumor microenvironment to further guide cancer drugs to their targets. “We hope that in the future our triggered accumulation technique can be combined with such targeting strategies to produce even more potent treatment effects,” says Papa.

How ultrasound-sensitive NPAs work: 1. Intact NPAs are introduced into the bloodstream. 2. Ultrasound waves are applied to the site of the tumor. 3. NPAs break apart in response to ultrasound, releasing nanoparticles that deliver their drug payload directly to the tumor. (Credit: Wyss Institute at Harvard University)

“This approach offers a novel solution to the pervasive problem of delivering a high concentration of an intravenous drug to a very specific area while sparing the rest of the body,” says senior author and Wyss Founding Director Donald Ingber, M.D., Ph.D., who is also the Judah Folkman Professor of Vascular Biology at Harvard Medical School (HMS) and the Vascular Biology Program at Boston Children’s Hospital, and Professor of Bioengineering at Harvard SEAS. “By using localized ultrasound to selectively deploy sustained-release nanoparticles loaded with high drug concentrations, we have created a non-invasive way to safely and effectively deliver chemotherapy only where and when it’s needed.”