More technologies are being developed that will diagnose disease faster and more accurately than ever before. It will enable doctors to get ahead of disease progression earlier, facilitating more effective treatments and increase the time of detection. The caveat to these wonderful diagnostic technologies is that many of them require a blood draw. When a patient is already sick or injured, the last thing they want is someone poking them with a needle to locate a vein and draw blood.

To address this issue, companies are attempting to develop alternatives to this traditional process that has gone pretty much unchanged for decades. One such company is Velano Vascular. They’ve developed technology that enables a pain-free blood draw procedure. In this interview with Dr. Pitou Devgon, the cofounder and president of the company, he speaks on his technology and the development of it.

Sean Fenske: What is your technology and how does it work?

Dr. Pitou Devgon: Velano Vascular’s technology is designed to enable a painless and reliable alternative to the age-old needle-based blood draw. Our single-use device utilizes the peripheral IV catheter, already indwelling in the majority of hospitalized patients, and advances a soft, flexible cannula through and past the IV catheter into the vein. The practitioner can then collect the blood sample using evacuated tubes or a syringe. Once all the tubes are collected, the Velano device’s inner cannula is retracted, and the device is disconnected and thrown away. 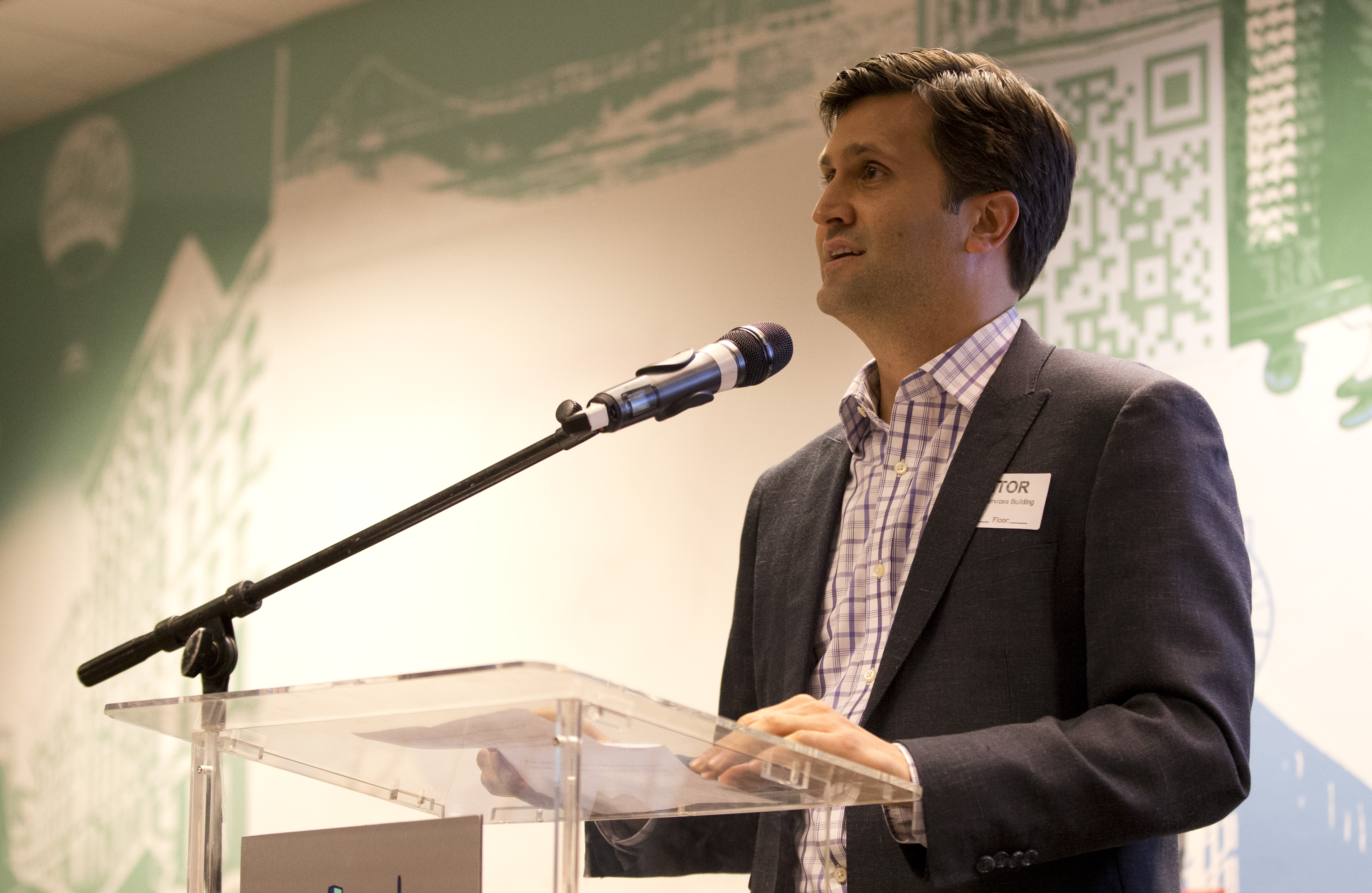 Dr. Pitou Devgon is a cofounder and president of Velano Vascular.

Fenske: What inspired you to attempt to improve the blood draw experience?

Dr. Devgon: Blood draws are one of the most commonly performed hospital procedures in the world, affecting nearly every hospitalized patient daily. Blood draws entail at least one or more needle sticks in what is typically a time-consuming, painful process of missed veins, bruising, and health-practitioner safety risks. An estimated 350 million blood draws were performed in U.S. hospitals alone last year, with tens of millions of draws occurring in pediatrics. That’s more than 760 blood draws per minute!

However, the unmet need only really became clear to me while I was rounding one day and met with one of my elderly patients who had been in the hospital for the better part of a week. It was before 7:00 AM and she had already been poked twice that morning, the first time waking her. She also had bruises, along with the requisite gauze and Band-Aids, up and down both her arms from the accumulation of blood draws. It is already miserable to be in the hospital, feeling sick, scared, and anxious, but adding 20 to 30 needle sticks for blood work was this patient’s major complaint that morning. In a calm but clearly frustrated voice, she pointed to her IV catheter and asked “why can’t you get my blood from this thing!?”

We do commonly draw blood off of IV catheters, but usually only after they are first placed and still “fresh” — after that, the IV catheter is usually restricted to infusing fluids and medications. This patient’s simple question haunted me for the next few months and the more I talked to physician colleagues, nurses and, eventually, experts and engineers, the more dissatisfied I became. The typical responses included “the IV just doesn’t draw blood back after a few hours,” “this is how we’ve always done it,” or the most frustrating, “it is just against our policy.” I thought, “There must be a simple solution”; I had no idea the complexity, engineering time, and resources it would take to solve the problem.

Fenske: You were a winner of the Sheikh Zayed Institute for Pediatric Surgical Innovation challenge. Can you tell me about that experience?

Dr. Devgon: The advantages of needle-free blood collections are the most evident in pediatrics. Nearly one out of two attempts to draw blood in children require multiple stick attempts, which is twice the adult-patient rate. Because the experience can be so traumatizing and trigger significant anxiety, roughly 38% of children have to be physically restrained. Pediatric practitioners try hard to reduce the pain, often employing lidocaine creams or other anesthetics, but these take 20-30 minutes to act, disrupt workflow and/or are cost-prohibitive. And let’s not forget the parents in this equation, who often suffer alongside their children. In fact, in a recent survey, nearly 40% of parents of pediatric patients indicated they would be willing to pay out of pocket over $100 if it helped facilitate a painless alternative.

As Velano started working with more pediatric institutions, we came across Children’s National Health System and the Sheikh Zayed Institute in Washington, DC. They were one of the most innovation-centric organizations we had seen in pediatrics and their annual Pediatric Innovation Summit brings together some of the nation’s best innovators focused in pediatric research and device development. The competition felt somewhat like “Shark Tank,” with each of the finalist teams pitching a packed room full of hospital executives, practitioners, researchers, industry leaders, and fellow entrepreneurs. It was an exciting and inspirational day and we were honored to be one of the two winners of the 2014 Pediatric Innovation Award. We continue to invest heavily in furthering our pediatric-specific work and highly value our collaborative relationship with the Sheikh Zayed Institute.

Fenske: Once you came up with the idea for the device, how did you find the development process?

Dr. Devgon: My background did not include any formal engineering training, so I became good friends with my local hardware store owner. The first prototype was built in my kitchen for less than $10 with off-the-shelf parts and tested in a yogurt maker! Innovation is an iterative process and you do not need to spend millions of dollars to prove feasibility. Our mentality in the “early days” was if the approach was going to ultimately fail, we wanted to fail as quickly and cost effectively as possible. Thus, a local engineering group provided assistance. They were able to take our “kitchen” prototypes and create functional devices. They also helped us design several fast gated, bench, and animal test versions. We fueled this initial development ourselves and then with a modest angel round. We were highly methodical (and frugal) in the early days and raced to achieve two value-creating milestones — proof of concept in animal model and a strong intellectual property portfolio. Once we achieved those milestones, we quit our “day” jobs, raised our Series A, and built the company.

Fenske: What significant challenges did you encounter in this venture?

Dr. Devgon: As a startup company with a first-to-market technology, we viewed our main enemy as time. We built a core engineering and quality team and found a contract manufacturer that could work closely with us to reduce cycle times. However, to design, iterate, test, and setup a validated manufacturing line for a new medical device in under 18 months was a major undertaking. This required finding industry veterans who had thrived in startup environments previously and leveraging our collective industry advisors and contacts. One of our constant timeline battles revolved around the long-lead ordering of supplies and tooling. We decided to parallel path several of those items, which increased the cost, but several times saved us months off our development cycles. It is amazing what a small, focused, and dedicated team can accomplish.

Fenske: What was it like attempting to get your device through the FDA review?

Dr. Devgon: The Velano Vascular device technology is a class II medical device and received 510(k) clearance this year. We were very satisfied with the process and interactions we had with the agency.

Fenske: How has the investment aspect of this journey been? What were the challenges involved with “getting noticed” in the crowd?

Dr. Devgon: Fundraising is a hard process and often viewed as a necessary evil by management teams. If the markets are working efficiently, they can help separate the good from the great ideas and help focus new innovation. My co-founder, who is now our company CEO, and I approached raising capital slightly differently than most medical device companies.

We first enlisted seasoned healthcare executives in our original angel round, and then banded together a larger group of executives, and combined them with forward-thinking hospital systems that all co-invested alongside four venture capital firms. Within this amazing network resides all the expertise, insights, and relationships to execute on our next phase of the company.

Fenske: How widespread is the use of your technology in healthcare?

Dr. Devgon: We are completing several clinical studies in the coming months and engaging in commercial pilots with our collaborating healthcare institutions. Before we begin to scale operations, we know it is critical to not only get the technology right, but also to bolster and streamline all of the critical elements that go around a medical device launch, including great clinical data, training, messaging and health economics, manufacturing processes, and of course, customer service.

Fenske: If you could go back and redo something along the development path, what would it be?

Dr. Devgon: Clinical studies coupled with experienced user feedback is key to any development process. However, despite our efficient iterations on the bench and animal work, we likely spent too much time organizing our first human clinical study. With hindsight, I would now have leaned toward doing a smaller, faster, simpler, initial study. I am confident we would have learned 90% of the key elements but completed it in half the time and cost.

Fenske: What’s on the horizon for your company? Will there be a 2.0 version?

Dr. Devgon: Our engineers are hard at work taking our radically different approach to vascular access and building a platform of products with the goal of satisfying many more unmet needs in the vascular arena.