Researchers from the Cajal Blue Brain Project have developed PyramidalExplorer, a free distributed software toolkit that allows researchers to study the organization of the pyramidal neuron in depth.

A team of researchers from Universidad Politécnica de Madrid and Universidad Rey Juan Carlos and CSIC has developed PyramidalExplorer, a software tool that is able to extract data from the micro-organization of the most abundant and traditional neurons of the cerebral cortex, the pyramidal cells. The application has been developed within the Cajal Blue Brain and Human Brain Project projects, its usage will allow us to explore new hypotheses to understand the human brain and seek solutions to fight against diseases such as Alzheimer’s, epilepsy and Parkinson’s. 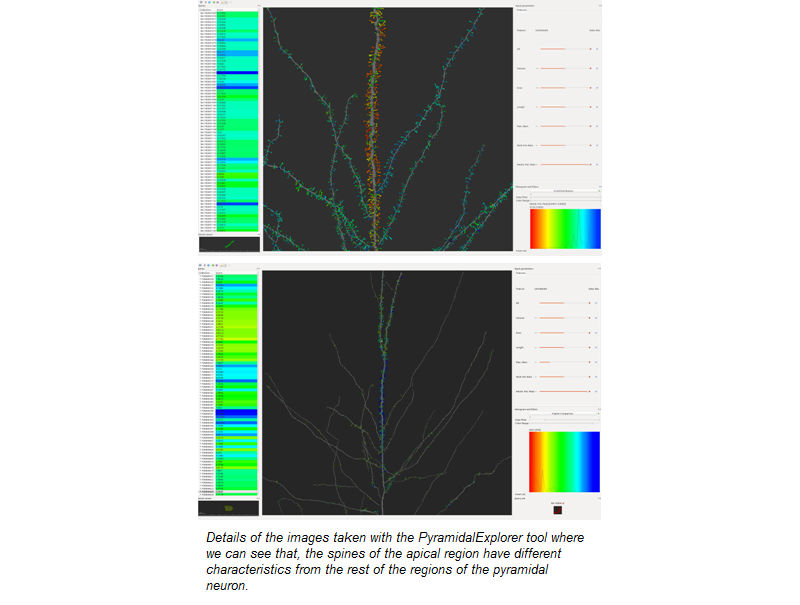 Details of the images taken with the PyramidalExplorer tool where we can see that, the spines of the apical region have different characteristics from the rest of the regions of the pyramidal neuron.

This study has combined functional models of pyramidal neurons with data of its architecture in order to interactively identify zones within the neurons that present singular characteristics. Specifically, from three-dimensional images obtained through a high resolution confocal microscopy, an expert can assess the organization of dendritic spines (main targets of excitatory connections in the brain) of this type of neurons by combining morphological information with practical information. This study was applied to a human being, specifically to a pyramidal neuron with 9,000 dendritic spines, although this tool can load data of any species.

These results will allow researchers to establish new hypotheses about the functioning and the organization of neural connections. For example, by using this tool, researchers were able to immediately observe that the volume and the area of the apical dendrites were different from the regions corresponding to apical and basal dendritic trees. Besides, the usage of this tool allows us to see the role played by diverse spines groups and their morphological characteristics in subcellular electrogenesis.

Today, there are not other software tools of similar characteristics to the developed tool in this study, such as its particular nature of data process and its programmed functionality. The main features of PyramidalExplorer go from three-dimensional navigation on digitized neurons to data filtering operations and content-based information retrieval. This tool has been developed with the programming language C ++ using free softwares such as Qt, that was used to develop the graphical interface, and Open Scene Graph for three-dimensional data visualization.

This study was published in the journal Frontiers in Neuroanatomy and this application can be freely downloaded on the website PyramidalExplorer.