A group of researchers at Chalmers University of Technology has discovered a completely new way of using lasers to accelerate ion beams. In time, the new technique could possibly give more people access to advanced cancer treatment. The results were recently published in the high impact journal Physical Review Letters.

Advanced ion technology may in some cases be used to treat otherwise inoperable tumors, such as brain tumors. The treatment involves a concentrated beam of ions that knock out the cancer cells, without damaging the healthy surrounding tissue. This is accomplished by the use of a so-called cyclotron accelerator. Today there are only a few facilities in the world that offer this kind of ion treatment. 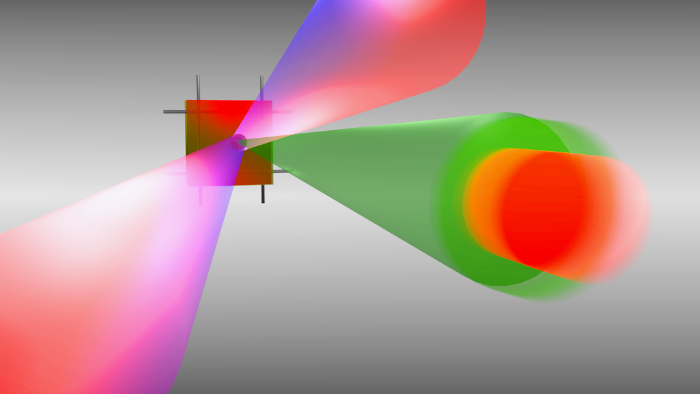 A laser beam (purple-red) falls onto a thin foil, with a mirror on the rear side. The beam is reflected, forming a standing wave. Because of the systematical variation in wavelength of the laser pulse, the crests of the wave start to move. This drags the electrons and ions along, accelerating them to high speeds (green beam). (Credit: Felix Mackenroth)

“Only very few patients can receive the treatment today because such a facility is not even available in every European country. Using our method to control the ions, the same technology will hopefully in the future be used in equipment that is compact, inexpensive, and easy to use”, says professor Mattias Marklund, Head of the Division of Theoretical Physics at Chalmers University of Technology and one of three researchers behind the discovery.

In just a short time he and his colleagues Felix Mackenroth and Arkady Gonoskov developed a novel technique, called “Chirped-Standing-Wave Acceleration”, that could be a paradigm shift. The researchers’ work is based on a particle accelerator where the ions are accelerated by using a laser, in contrast to conventional accelerators that use electric fields to accelerate ions.

“We knew that a laser could trap electrons but did not know how to move the electrons so that they could drag the ions with them. We found an elegant solution to this puzzle by letting the laser’s wavelength vary continuously, in such a way that the ions were accelerated”, says Arkady Gonoskov, postdoctoral researcher in physics.

So far there have been only a few ways to accelerate ions using lasers, and none of them could control the ions in an organized and efficient manner.

“It was more like using a sledgehammer. With our method we can capture, stabilize and organize large numbers of ions with great precision without using a lot of energy. This is a small step towards the ultimate goal of treating cancer tumors in a way that provides enormous benefit to society. But we are still far from the ultimate goal”, says Felix Mackenroth, postdoctoral researcher in physics.

So far, the method has only been tested with the help of advanced computer simulations, but experiments are planned in cooperation with Lund University.

This research was conducted within the framework of the Pliona project funded by the Knut and Alice Wallenberg Foundation. Umeå University is also participating in the project.

The researchers in the project use a laser to give the ions the right energy, instead of using conventional particle accelerators. They send a laser beam that hits a thin foil. When the foil is hit by the laser pulse the atoms ionize and the material is transformed to a plasma made of charged particles. Some electrons are released and accelerated away. The electric voltage created between the displaced electrons and the positive ions drags the ions out of the material and the process provides them with high energy.