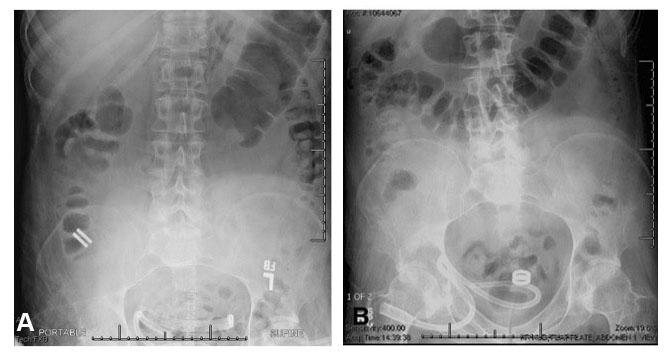 Mated magnets are visible on abdominal x-ray. The magnets appear in the right lower quadrant soon after placement (A) and in the rectum one day before passage of the magnet from the patient’s body (B). (Credit: University of California San Francisco)

An experimental device that employs a pair of magnets offers surgeons a new safe and simple alternative to standard methods for creating an anastomosis for the first time in nearly 50 years. An anastomosis is a surgical connection between tubular anatomic structures, such as blood vessels, urinary tract, or bowel. In its first proof-of-concept clinical trial in humans, the device was easy for surgeons to use, even with patients who required complicated surgical reconstruction. It also was safe; none of the patients had any complications related to the use of the device or the anastomosis it fashioned. Findings from the clinical trial now appear as an “article in press” on the Journal of the American College of Surgeonswebsite in advance of print.

An anastomosis is common in many kinds of operations performed by general surgeons. It currently is done in one of two ways. The first approach involves suturing two pieces of tissue together with a needle and thread. This option is inexpensive and can be done in any surgical setting. However, suturing requires either an open operation so surgeons have enough room to maneuver instruments, or highly specialized technical skills in minimally invasive procedures, and it takes time to place multiple layers of sutures during a procedure, said Claire Graves, MD, lead author and research fellow at the University of California San Francisco when the study was conducted.

When surgical staplers were introduced in the 1970s, stapling often became the preferred method for performing an anastomosis. Stapling is faster than suturing, and it produces a more consistent result. Staples are, however, expensive, and the devices can sometimes fail or misfire, added Dr. Graves, a current resident in general surgery at Columbia University Medical Center, New York City.

Magnetic compression anastomosis applies the force of magnetic attraction to form an anastomosis without sutures or staples. The technique utilizes a MagnamosisTM device, which houses two rare earth magnets in a specially engineered medical grade polycarbonate shell. The magnetic implants have different polarities so they are drawn to one another. The magnets also have different shapes–one is convex and one is concave–so they fit smoothly together. In the formation of an anastomosis, a magnet is placed in each side of the tube that is being surgically connected, and then the magnets are drawn together, compressing the tissue between them and blocking blood flow.

“The tissue between the magnets dies off, a hole forms from the necrotic tissue, and the surrounding area heals. Once the connection is fully formed, the magnets fall through the hole, pass into the bowel, and are excreted in the stool, leaving nothing behind,” Dr. Graves explained.

In animal studies, the Magnamosis device consistently created anastomoses that were comparable or better than hand-sewn or stapled alternatives as demonstrated in tissue samples and tests of the strength of the connection.

The JACS study presents the first-in-human prospective case series involving the device. Although the study was open to any patient who needed any size small or large bowel anastomosis to restore bowel continuity, the first surgeons to recruit patients were urologists who were treating high-risk, complicated patients. Three of five patients in the study were quadriplegic, had bladder and bowel complications, and were bedridden. Two had end stage renal disease requiring dialysis and were candidates for renal transplant. Three patients had previous abdominal operations, and all five had undergone many previous urologic procedures.

“The development of the Magnamosis device is at a very early stage. It has an investigative device exemption from the U.S. Food and Drug Administration so it can be tested under clinical trial conditions. If other surgeons in other settings with other patient populations have similar results with the device, we can apply to the FDA for a 510(k) clearance and begin to bring the product into more widespread use,” said Michael Harrison, MD, FACS, professor emeritus of surgery at UCSF.