Rescue inhalers are commonly used by asthmatics, as necessary, during asthma attacks. But people with asthma sometimes use maintenance inhalers, on a prescribed schedule, to prevent attacks.

As with other prescription medications, patients sometimes forget or don’t adhere to the prescription, sometimes causing hospital visits and leading to preventable health care costs.

Now MIT spinout Gecko Health, with its recent acquisition by Teva Pharmaceuticals, aims to boost development on its sensor that attaches to inhalers to monitor usage, with aims of keeping patients healthy and cutting health care costs.

“It’s not about selling the company, but really being able to achieve what you want to achieve,” says Gecko Health co-founder and CEO Yechiel Engelhard MBA ’12.

There are more than 25 million people living with asthma in the United States. Non-adherence to inhaler prescriptions, especially in severe cases, can cost each patient anywhere from $700 to $4,000 annually in preventable medical costs, according to the Centers for Disease Control and Prevention. 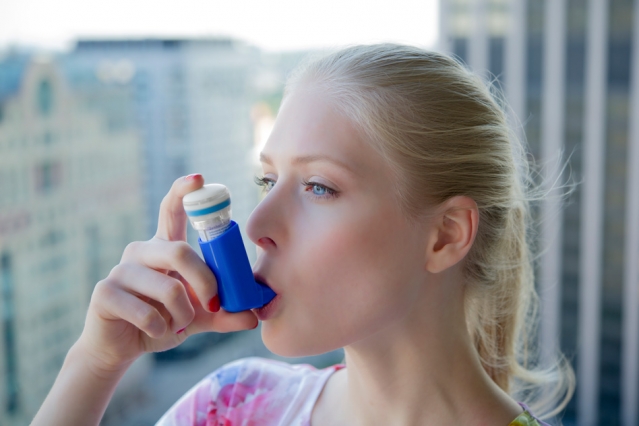 “The idea is to make things very transparent and easy to understand — anything to make you a smarter patient,” says Engelhard, who launched the startup with Mark Maalouf MBA ’12, who was Gecko Health’s chief technology officer before the acquisition.

Tracking Asthma
The full system, launched in 2014, called CareTRx, is a small cap equipped with sensors and onboard memory that fits over the canister of most metered-dose inhalers. When a user presses down to deliver a dose, the onboard memory stores that data. Then, when the user is near a mobile device, the cap automatically connects and syncs to the cloud and to the product’s app. Lights around the cap also illuminate when it’s time for a dose.

The app offers several features: a diary that tracks potential triggers, peak flow, and symptoms; notifications for upcoming or missed doses; a percentage of prescription adherence; and a “badge” system for users, which rewards them for certain “good” behaviors.

Users own the data, but can share them with anyone, such as health care provides or caregivers. Researchers and clinicians, with permission from the users, may also use another dashboard component to track usage among entire populations of patients anonymously.

The sensor can also track overuse of rescue inhalers, which is sometimes overlooked, Engelhard says: A patient using a rescue inhaler, say, five times during a run when they’ve previously only used it a couple times, for instance, can signal an underlying issue. “There could be something wrong. Your airways are getting inflamed narrowed and we make it more transparent to you,” he says.

Hundreds of patients nationwide are now using CareTRx to plug in their data.

Hacking Asthma
As a physician in Israel, Engelhard worked, among other things, on developing products that can teach children to use their inhalers appropriately.

Enrolling in the MIT Sloan School of Management’s entrepreneurship and innovation track in 2010, Engelhard sought technologies to help chronic patients. In 2012, he joined the MIT Media Lab’s Health and Wellness Innovation Hackathon, where he found “a whole group formed around asthma,” Engelhard says. 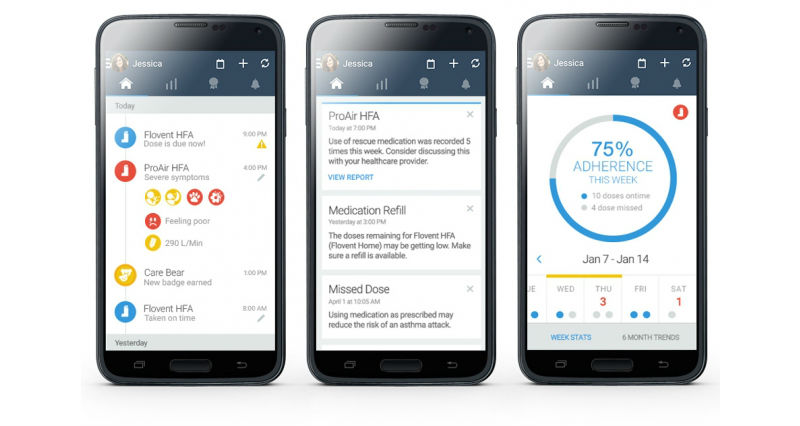 The team developed the Chameleon, a cumbersome plastic piece that attached to an inhaler and monitored peak flow, lung function, canister capacity, and dosage, and came with a game-based app that let children earn points for using their inhalers. There were also talks of adding a sensor to detect pollen. “It was a Swiss Army knife for the patient with asthma,” Engelhard says.

For the invention, the team won the $5,000 first-place prize at the hackathon, then a new team formed and took home second place in the life sciences track at the MIT $100K Entrepreneurship Competition in June 2012.

But that summer, Engelhard took the project to the now-defunct MIT Beehive Cooperative, a space for MIT entrepreneurs, and met Maalouf — and things really took off. “The Beehive was really one of the best things that could happen for our company,” Engelhard says.

At the Beehive, Maalouf, a former Microsoft engineer who was also enrolled in MIT Sloan’s entrepreneurship and innovation track, put aside his sports analytics startup to focus primarily on Engelhard’s project.

Recruiting MIT undergraduates, the team developed a crude but functional prototype: Because the electronics of the prototype couldn’t fit inside the tiny cap, they sawed off the canister top and stuffed the components inside, leaving some wires dangling out of the top. But the notification lights blinked, and the data synched to an app — it was enough to draw attention from the health care community and a few pharmaceutical firms, Maalouf says.

“There were demonstrations we had to fly out for, and I remember getting stopped at airport security because it looked like a suspicious trigger,” Maalouf says. “It looked weird, but it did the job.”

Refining and Refining
Over the years, Gecko Health has refined the hardware and software to better suit consumers and to attract partners.

A key innovation to the hardware, for instance, was building the sensor for continuous data storage, along with blinking LED reminders, while allowing for long battery life. The sensor’s onboard memory holds about 400 data points, and lasts six to 12 months, Maalouf says. This means no constant recharging. “You’re already trying to solve the adherence issue,” Maalouf says. “If you add a [charging] step, you’re not helping, you’re hurting.”

On the software side, key innovations include algorithms optimized to increase battery life, and making sure the app grabs data from the sensor and sends it to the cloud, even if the app isn’t opened.

With the recent acquisition, Gecko Health hopes to expand its data analytics to look for local weather and air quality (such as pollen and pollution), among other things. The system now collects a lot of information manually: For example, if someone used a rescue inhaler more often than usual, the app will ask if it could be due to, say, weather, increased pollen, or pet dander.

But gathering and analyzing data passively using various sensors and components in smartphones, Engelhard says, could lead to more precise predictive analytics to alert users to better prepare. “We can build correlation between different pollution and weather and when people use inhalers,” he says. “In this way, we can predict for the patient [and] notify the patient they should stay at home or keep the rescue inhaler in reach.”