A new tumor model has been shown to predict how certain types of cancer cells react differently to a commonly used chemotherapy drug, a potential tool for “precision medicine,” in which drug treatment is tailored to individual patients and certain cancer types.

“This means rapid and accurate screening of effective drugs and drug combinations can be extremely useful to realize precision medicine for cancer therapy,” said Bumsoo Han, a Purdue University professor of mechanical and biomedical engineering, in a press release.

Recent research findings demonstrate that a new tumor-modeling platform called a tumor-microenvironment-on-chip (T-MOC) can be used to visualize and quantify how different types of cancer cells react differently to the chemotherapy drug doxorubicin. The drug sometimes failed during testing to kill cancer cells yet stopped their growth.

“So, there are differences in the response to the drug based on cancer type,” Han said. “Our platform makes it possible to assess the efficacy of chemotherapeutic drugs according to cell-type; for example, which cells actually died from this drug, which cells didn’t die but stopped actively growing, or even which cells survived the drug.”

Based on experimental data, the researchers developed a theoretical model to quantify and ultimately predict the effectiveness of drugs depending on the type of cancer cell being treated.

The findings were detailed in a paper published in the July issue of Molecular Pharmaceutics. The paper was authored by graduate student Kyeonggon Shin, undergraduate Brett Klosterhoff and Han.

Researchers performed experiments using the T-MOC platform that could help usher in precision medicine, in which drug treatment is tailored to specific patients and certain cell types.

“We are providing a new tool, a new platform to test drugs and drug delivery systems for precision medicine,” Han said. 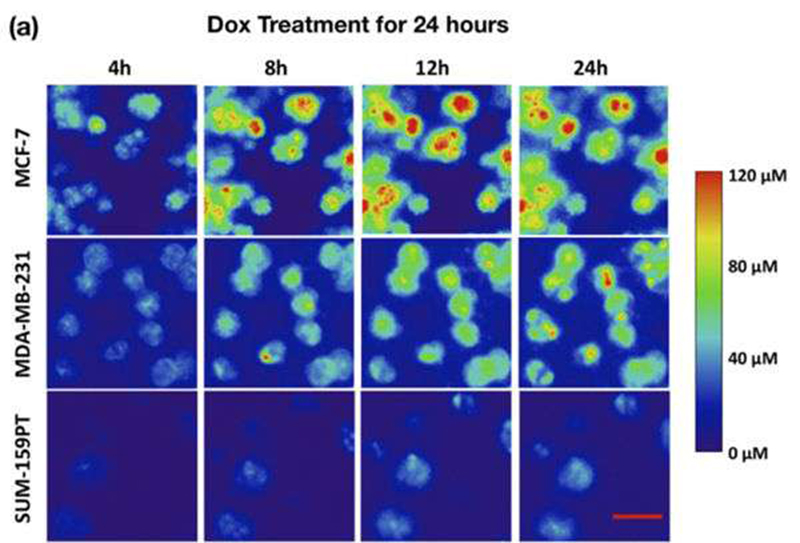 The device is about 4.5 centimeters (1.8 inches) square and contains “microfluidic” channels where cancer cells were cultured within a three-dimensional “extracellular matrix,” a scaffold-like material found between cells in living tissue. The experiments also incorporated “interstitial ﬂuid,” which is found inside tumors and is thought to be a barrier to drug delivery.

Three types of human breast cancer cell lines were cultured on the T-MOC platform, and their drug response and resistance to doxorubicin were characterized by time-lapse ﬂuorescence microscopy.

“Particularly in breast cancer, there are different subgroups of cancers,” Han said. “Depending on the subgroup, the drug response is different. So, to study the efficacy of a drug and its nanoparticle formulation, we examined how the drug and nanoparticles were transported through the interstitial space and uptaken by different types of cancer cells.”

Two of the three types of breast cancer cells tested were triple negative breast cancer, one of the most-difficult-to-treat forms of the disease.

“Even within triple negative there are additional subtypes, so this is not one single disease,” Han said. “The targeting drugs only work with certain types of cells.”

The findings also showed some cell types take up drugs more rapidly than others.

“You can see that, depending on the cell type, the response to the same drug is different and the drug uptake is different,” he said.

Future research will involve comparing and validating research results with data from laboratory animal tests and incorporating a more complex mixture of tumor stromal components in the T-MOC experiments. Ultimately, in precision medicine, a patient’s tumor cells might be studied using a T-MOC system to determine the proper drug and dosage to use before beginning treatment, Han said.