For women who opt for two-stage breast reconstruction surgery following a mastectomy, the expansion process can be long and arduous. That’s been the case for decades, but one company is trying to upend that model.

Following the traditional approach, a tissue expander is implanted under the chest muscle and then expanded with saline. The patient must commit to weekly visits to their physician to receive saline injections to expand their tissue expanders. Those injections gradually expand the tissue expander which helps stretch the remaining muscle, breast tissue, and skin the appropriate amount to create room for a permanent implant.

“When a woman has a mastectomy and decides to recover her body, one of the challenges is that a large percentage of her natural tissue and skin has been removed via a mastectomy procedure,” says AirXpanders CEO Scott Dodson. “In order to help her recover her body, a new space has to be created that can then hold a permanent implant.”

Dodson and his colleagues at AirXpanders, headquartered in Palo Alto, California, believe they’ve found a better way to accomplish the establishment of the pocket.

The new AeroForm device expands without needles and many inconvenient office visits. Instead, AeroForm is expanded with carbon dioxide (CO2), which is contained in a small reservoir contained inside the tissue expander. Similar to a traditional tissue expander, AeroForm is put into place at the time of the original mastectomy, but instead of having to go back to the surgeon’s office for injections, the patient can control the expansion and can administer doses of CO2 using a remote dosage controller.

“The method used in placing AeroForm is really not much different than with the traditional saline tissue expander,” Dodson says. “However, with AeroForm, the woman can control when and where she conducts tissue expansion based on her comfort, which is an entirely different experience.” 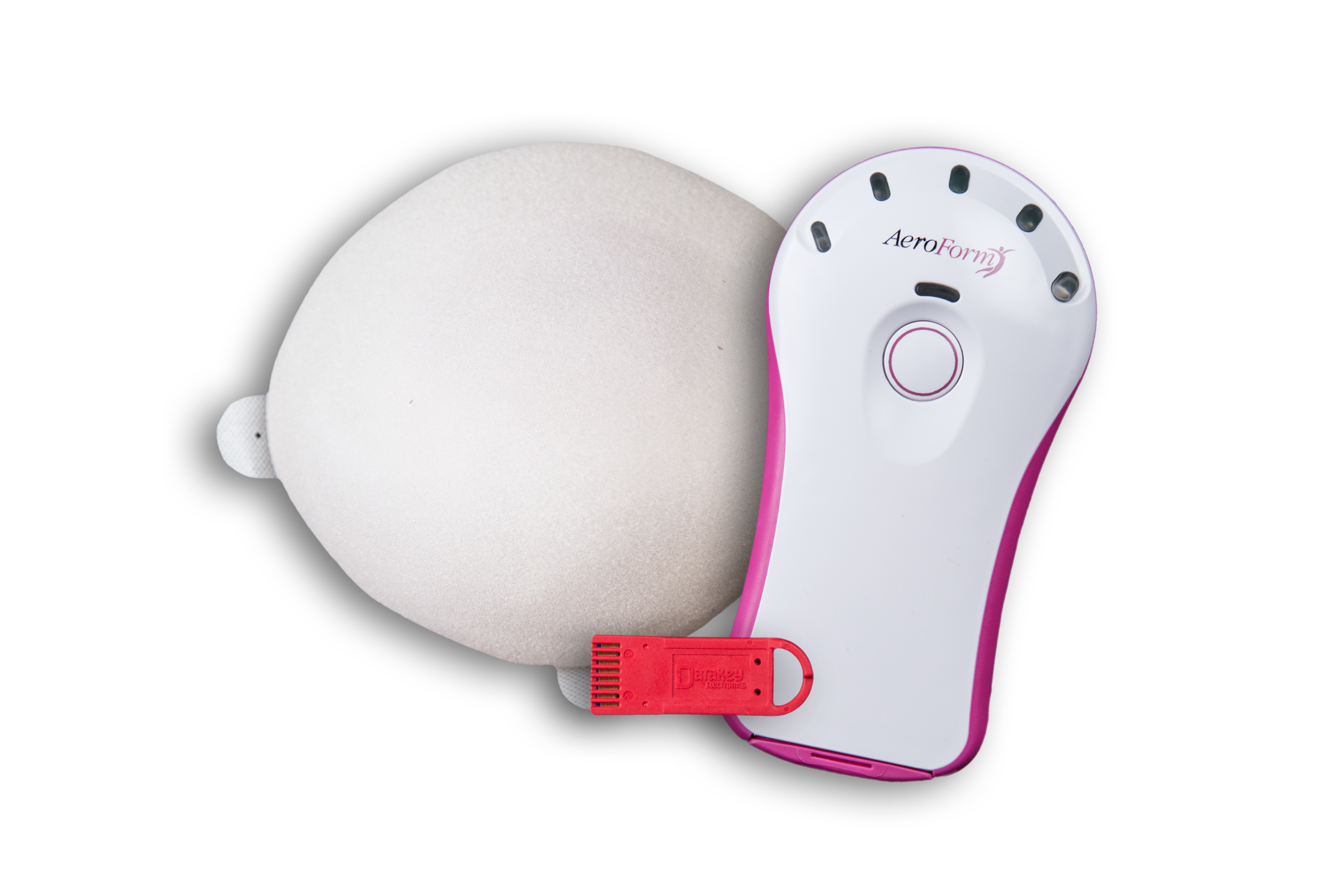 While the appearance and feel aren’t significantly different, there are some slightly adjusted steps that need to be taken with AeroForm, according to Khashayar Mohebali, MD, a surgeon who participated in AeroForm’s clinical trial.

With AeroForm, the initial volume that you put in is basically done with CO2 as opposed to saline,” says Dr. Mohebali. “Also, the surgeon pairs the remote dosage controller with the expander.”

AeroForm allows the patient to control the tissue expansion process between the mastectomy and her exchange to a permanent implant.

“AeroForm has a small lipstick sized reservoir of CO2 in the device. As opposed to having to visit her surgeon for a saline injection, the patient takes the wireless dosage controller and moves it over her chest to connect with the expander. Once the controller registers that it’s in the right position, she just presses a button and a little 10cc puff of CO2 goes into the device,” Dodson explains.

The patient can administer the puff of CO2 in the privacy of her own home or office, with a three hour lockout between doses. Any worries about patients falling off on regular delivery of the little doses were alleviated by the results of the clinical trials.

Luincys Fernandez demonstrates how she had used the AeroForm handheld dosage controller during an interview at NewYork-Presbyterian/Columbia University Medical Center. (AP Photo/Mary Altaffer)

“When we got the dose controllers back and we analyzed the data on how many times a day patients attempted to dose and actually dosed, it was like they were looking at their watch, and every three hours they were pressing the button to administer another little 10cc puff,” Dodson says. “What the women came back and told us resoundingly was, ‘Look, with this in my hands, I felt like I was actually playing an active part in recovering my body, and it felt good to be a part of that process, as opposed to just going back to the surgeon’s office and having something done to me.’”

AeroForm is still awaiting FDA clearance, but AirXpanders executives expect it will arrive in the very near future, perhaps even before the end of the year.

Once AeroForm is commercially introduced into the field, Dodson believes the fundamental technology behind the device will lead to further medical innovations, especially as they further miniaturize the microvalve at the core of it.

“This platform technology can be utilized in a series of devices for burn patients, pediatric patients, and trauma patients,” he says. “One of our future goals is to advance out into some of these other areas that may not be as large as the breast cancer reconstruction area, but are very open to advancement and the benefits that this technology can bring to those patients as well.”