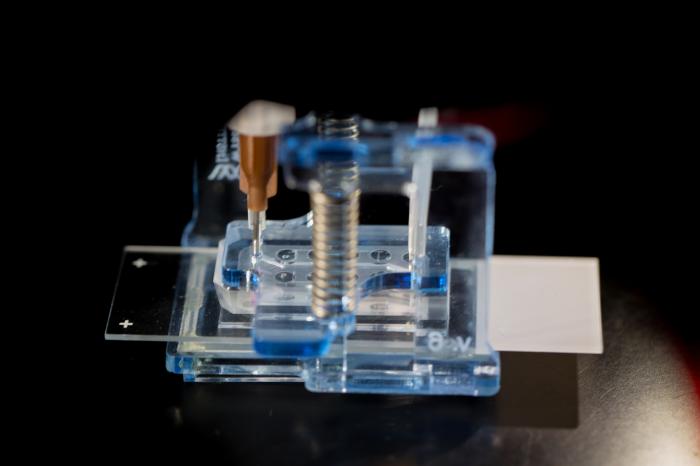 Researchers have developed an airway-on-a-chip that supports living small-airway-lining cells from normal or diseased human lungs and an instrument that “breathes” cigarette smoke in and out over these chips. Using this technology, researchers from the Wyss Institute for Biologically Inspired Engineering at Harvard University recreated and analyzed the effects of smoking at the molecular, cellular, and tissue level to understand the damage occurring in normal lung and in engineered lung tissues from patients with chronic obstructive pulmonary disease (COPD), the third leading cause of death in the US. They showed that this approach can also be used to test the effects of other tobacco products, such as e-cigarettes, and to identify potential therapies to prevent lung injury in smokers and smoke-induced exacerbations in patients with COPD. The research appears October 27 in Cell Systems.

People with COPD, a group of lung diseases strongly linked to tobacco smoking that includes emphysema and chronic bronchitis, experience symptoms including shortness of breath, coughing, and difficulty clearing mucus from the lungs. “It’s one of the lung diseases that has very few therapeutics available in the market. Most of the drugs given are to control the symptoms; there is no cure to reverse or prevent disease progression,” says study first author Kambez H. Benam.

To understand how smoking affects the small airways damaged in COPD, the researchers first built a lung airway-on-a-chip. “These devices are made of a clear flexible rubber the size of a computer memory stick. We call them chips because we adapted computer microchip manufacturing methods to create very small hollow channels that we line with living human cells,” says senior author Donald Ingber. Bronchiolar epithelial cells are cultured in a top channel, where air can pass over them, and fed through a bottom channel, which acts as a vascular system. The cells differentiate and specialize on the chips, produce mucus, and develop cilia, hair-like extensions that beat in concert to push mucus out of airways.

To mimic the behavior of human smokers, what Benam calls “the smoking topography,” the researchers built a smoking machine to act as a mouth that can take a puff of a cigarette, exhale it, and breathe normal air in and out between puffs. This connects to the airway-on-a-chip and a microrespirator, which acts as a diaphragm pulling air and smoke across the chip and pushing it out. Software determines, among other variables, how many puffs the smoking machine takes per cigarette and how many breaths between puffs.

Ingber and co-authors showed that when exposed to smoke, the airway-on-a-chip experienced changes in oxidation-reduction pathways and gene expression profiles that matched those found in human smokers. Using automated image processing, they also showed that on chips exposed to smoke, cilia in some areas beat normally but in other areas beat at much reduced rates, providing insights into what happens in smokers’ lungs.

To test the versatility of their system, Ingber and colleagues also tested the effects of e-cigarettes. They found less evidence of changes in oxidation-reduction pathways but similar changes in cilia beat patterns.

The airway-on-a-chip has distinct advantages over other systems used to study smoking’s effects. In vitro studies usually expose cultured cells to cigarette extracts introduced in a liquid form or at most use isolated puffs of smoke rather than the variable patterns of smoke and air movements that smokers experience. Rodent models are limited by differences in breathing physiology, and rodents do not exhibit the human’s disease progression. Current clinical studies are limited to tissue samples that are already diseased.

By growing cells on chips, “we can take the same patient’s lung chip and look at it before and after exposure to smoke, which is a much more direct way to ask specifically, ‘What is the effect of smoke inhalation on the response of the lung?'” says Ingber.

To further their research, the study authors plan to develop more elaborate chips that would include other types of cells found in airways, including immune cells, to more closely mimic human-level responses. They also plan to use the chips in pre-clinical studies to identify potential therapeutic targets for COPD. As Benam says, “This type of research is very high risk; it brings so many stakeholders, chemists, engineers, etc. to the table to think about this model and tackle some of the challenges we have in healthcare and in society.”