A study in the New England Journal of Medicine describes the safety and effectiveness of a high-tech alternative to brain surgery to treat the uncontrollable shaking caused by the most common movement disorders.

Led by Jeff Elias, M.D., of the University of Virginia Health System, the study evaluated the scalpel-free approach called focused ultrasound for the treatment of essential tremor (ET). Focused ultrasound uses sound wave sin side the brain to create heat, which can be used to interrupt troublesome brain connections responsible for the tremor.

The researchers found that the procedure was safe and effective, as well as offered a lasting benefit that reduced shaking for trial participants throughout the 12-month study period.

Seven six participants were involved in the year-long clinical trial, all having moderate to severe ET, a condition that affects people’s ability to write, feed themselves, and carry out otherwise normal daily activities. All participants, with a mean age of 71, had tried existing medications previously with no results. 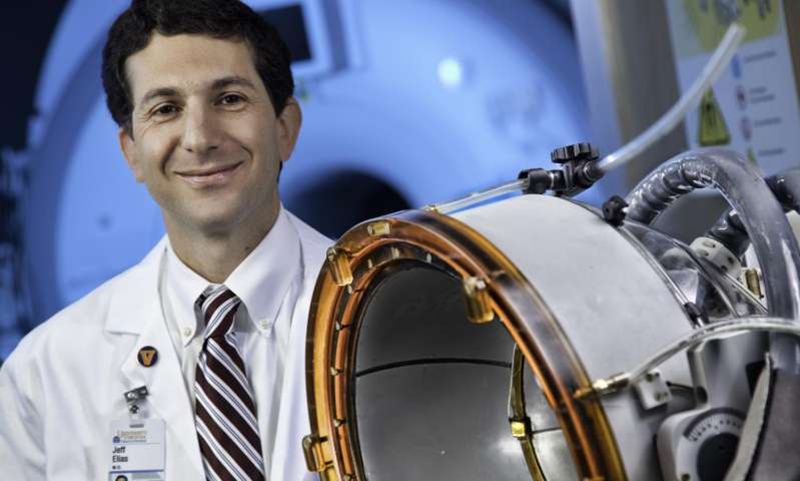 Jeff Elias, MD, of the University of Virginia Health System, has pioneered the use of focused ultrasound for the treatment of essential tremor, the most common movement disorder. Researchers believe it has the potential to treat many other conditions as well. (Credit: Jackson Smith, UVA Health System)

Seventy-five percent of participants got the focused ultrasound treatment guided by magnetic resonance imaging. The remaining 25 percent acted as a control group, undergoing a sham procedure, though they would later be given the chance to undergo the real procedure.

Those who received the treatment showed improvement throughout the clinical study, including being able to do things they were unable to do before, like feed themselves soup and cereal, with no issues. The group that received the sham procedure showed no significant improvements.

The U.S. Food and Drug Administration (FDA) has approved the focused ultrasound device, manufactured by InSightec Inc., based on the data from Elias’ study. The University of Virginia is planning on making the procedure available to eligible patients, though the college is still working out the logistics before officially starting treatment to a mass market.