Laser technology has revealed a common trait of Alzheimer’s disease—a sticky situation that could lead to new targets for medicinal treatments.

Alzheimer’s statistics are always staggering. The neurodegenerative disease affects an estimated 5 million Americans, one in three seniors dies with Alzheimer’s or a form of dementia, it claims more lives than breast and prostate cancers combined, and its incidence is rising.

To help fight this deadly disease, Lisa Lapidus, Michigan State University professor of physics and astronomy, has found that peptides, or strings of amino acids, related to Alzheimer’s wiggle at dangerous speeds prior to clumping or forming the plaques commonly associated with Alzheimer’s. 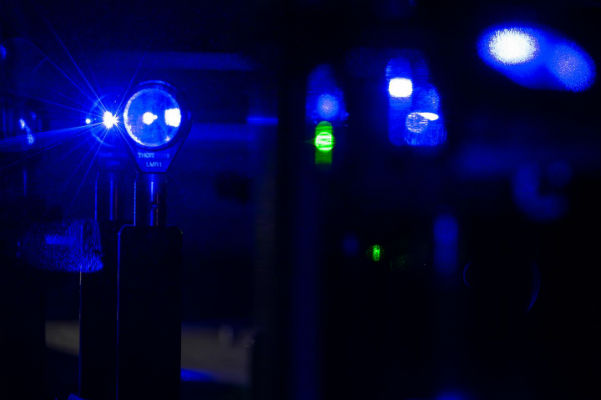 “Strings of 40 amino acids are the ones most-commonly found in healthy individuals, but strings of 42 are much more likely to clump,” said Lapidus, who published the results in the current issue of ChemPhysChem. “We found that the peptides’ wiggle speeds, the step before aggregation, was five times slower for the longer strings, which leaves plenty of time to stick together rather than wiggle out of the way.”

This so-called “wiggle” precedes clumping, or aggregating, which is the first step of neurological disorders such as Alzheimer’s disease, Parkinson’s disease and Huntington’s disease. Lapidus pioneered the use of lasers to study the speed of protein reconfiguration before aggregation.

“The dangerous middle is the speed in which clumping happens fastest,” Lapidus said. “But we were able to identify some ways that we can bump that speed into a safer zone.”

Lapidus and her team of MSU scientists, including Srabasti Acharya, Kinshuk Srivastava and Sureshbabu Nagarajan, found that increasing pH levels kept the amino acids wiggling at fast, safe speeds. Also, a naturally occurring molecule, curcumin (from the spice turmeric), kept the peptide out of the dangerous middle.

While this is not a viable drug candidate because it does not easily cross the blood-brain barrier, the filter that controls what chemicals reach the brain, they do provide strong leads that could lead to medicinal breakthroughs.

Along with new drug targets, Lapidus’ research provides a potential model of early detection. By the time patients show symptoms and go to a doctor, aggregation already has a stronghold in their brains. Policing amino acids for wiggling at dangerous speeds could tip off doctors long before the patient begins to suffer from the disease.

This research was funded by the National Institutes of Health.

Michigan State University has been working to advance the common good in uncommon ways for more than 150 years. One of the top research universities in the world, MSU focuses its vast resources on creating solutions to some of the world’s most pressing challenges, while providing life-changing opportunities to a diverse and inclusive academic community through more than 200 programs of study in 17 degree-granting colleges.