An amputee was able to feel smoothness and roughness in real-time with an artificial fingertip that was surgically connected to nerves in his upper arm. Moreover, the nerves of non-amputees can also be stimulated to feel roughness, without the need of surgery, meaning that prosthetic touch for amputees can now be developed and safely tested on intact individuals.

The technology to deliver this sophisticated tactile information was developed by Silvestro Micera and his team at EPFL (Ecole polytechnique fédérale de Lausanne) and SSSA (Scuola Superiore Sant’Anna) together with Calogero Oddo and his team at SSSA. The results, published today in eLife, provide new and accelerated avenues for developing bionic prostheses, enhanced with sensory feedback.

“The stimulation felt almost like what I would feel with my hand,” says amputee Dennis Aabo Sørensen about the artificial fingertip connected to his stump. He continues, “I still feel my missing hand, it is always clenched in a fist. I felt the texture sensations at the tip of the index finger of my phantom hand.”

Sørensen is the first person in the world to recognize texture using a bionic fingertip connected to electrodes that were surgically implanted above his stump.

Nerves in Sørensen’s arm were wired to an artificial fingertip equipped with sensors. A machine controlled the movement of the fingertip over different pieces of plastic engraved with different patterns, smooth or rough. As the fingertip moved across the textured plastic, the sensors generated an electrical signal. This signal was translated into a series of electrical spikes, imitating the language of the nervous system, then delivered to the nerves.

Sørensen could distinguish between rough and smooth surfaces 96% of the time.

In a previous study, Sorensen’s implants were connected to a sensory-enhanced prosthetic hand that allowed him to recognize shape and softness. In this new publication about texture in the journal eLife, the bionic fingertip attains a superior level of touch resolution. 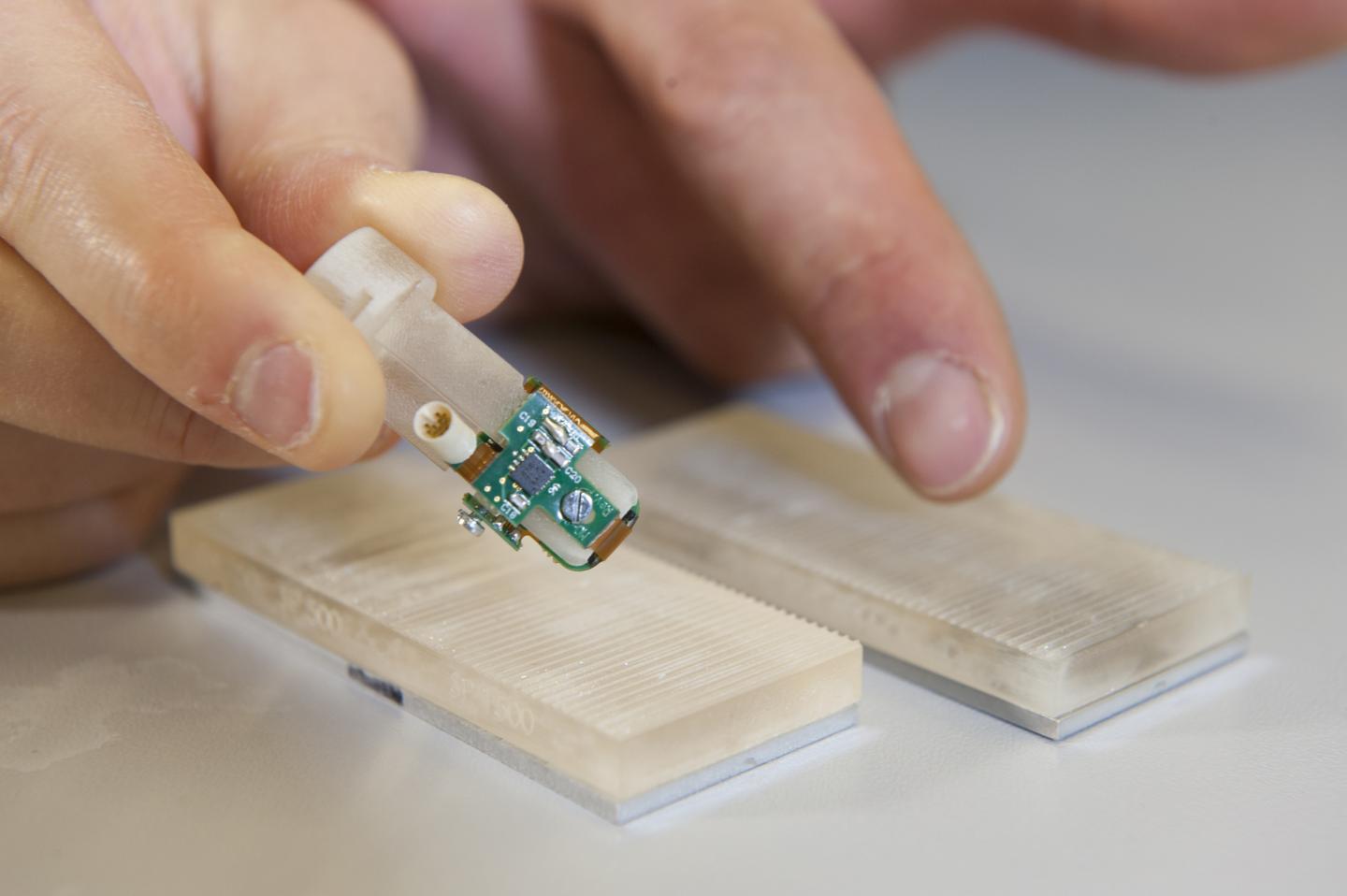 Detail of the bionic fingertip electronics that restored sensations of texture to amputee Dennis Aabo Sørensen, and the plastic gratings with rough and smooth textures. (Credit: Hillary Sanctuary / EPFL)

Simulating Touch in Non-Amputees
This same experiment testing coarseness was performed on non-amputees, without the need of surgery. The tactile information was delivered through fine, needles that were temporarily attached to the arm’s median nerve through the skin. The non-amputees were able to distinguish roughness in textures 77% of the time.

But does this information about touch from the bionic fingertip really resemble the feeling of touch from a real finger? The scientists tested this by comparing brain-wave activity of the non-amputees, once with the artificial fingertip and then with their own finger. The brain scans collected by an EEG cap on the subject’s head revealed that activated regions in the brain were analogous.

The research demonstrates that the needles relay the information about texture in much the same way as the implanted electrodes, giving scientists new protocols to accelerate for improving touch resolution in prosthetics.

“This study merges fundamental sciences and applied engineering: it provides additional evidence that research in neuroprosthetics can contribute to the neuroscience debate, specifically about the neuronal mechanisms of the human sense of touch,” says Calogero Oddo of the BioRobotics Institute of SSSA. “It will also be translated to other applications such as artificial touch in robotics for surgery, rescue, and manufacturing.”