Before performing radiation therapy, radiation oncologists first carefully review medical images of a patient to identify the gross tumor volume — the observable portion of the disease. They then design patient-specific clinical target volumes that include surrounding tissues, since these regions can hide cancerous cells and provide pathways for metastasis.

Known as contouring, this process establishes how much radiation a patient will receive and how it will be delivered. In the case of head and neck cancer, this is a particularly sensitive task due to the presence of vulnerable tissues in the vicinity.

This inter-physician variability is a problem for patients, who may be over- or under-dosed based on the doctor they work with. It is also a problem for determining best practices, so standards of care can emerge.

Recently, Carlos Cardenas, a graduate research assistant and PhD candidate at The University of Texas MD Anderson Cancer Center in Houston, Texas, and a team of researchers at MD Anderson, working under the supervision of Laurence Court with support from the National Institutes of Health, developed a new method for automating the contouring of high-risk clinical target volumes using artificial intelligence and deep neural networks.

They report their results in the June 2018 issue of the International Journal of Radiation Oncology*Biology*Physics.

Cardenas’ work focuses on translating a physician’s decision-making process into a computer program. “We have a lot of clinical data and radiation therapy treatment plan data at MD Anderson,” he said. “If we think about the problem in a smart way, we can replicate the patterns that our physicians are using to treat specific types of tumors.”

In their study, they analyzed data from 52 oropharyngeal cancer patients who had been treated at MD Anderson between January 2006 to August 2010, and had previously had their gross tumor volumes and clinical tumor volumes contoured for their radiation therapy treatment.

Cardenas spent a lot of time observing the radiation oncology team at MD Anderson, which has one of the few teams of head and neck subspecialist oncologists in the world, trying to determine how they define the targets.

“For high-risk target volumes, a lot of times radiation oncologists use the existing gross tumor disease and apply a non-uniform distance margin based on the shape of the tumor and its adjacent tissues,” Cardenas said. “We started by investigating this first, using simple distance vectors.” 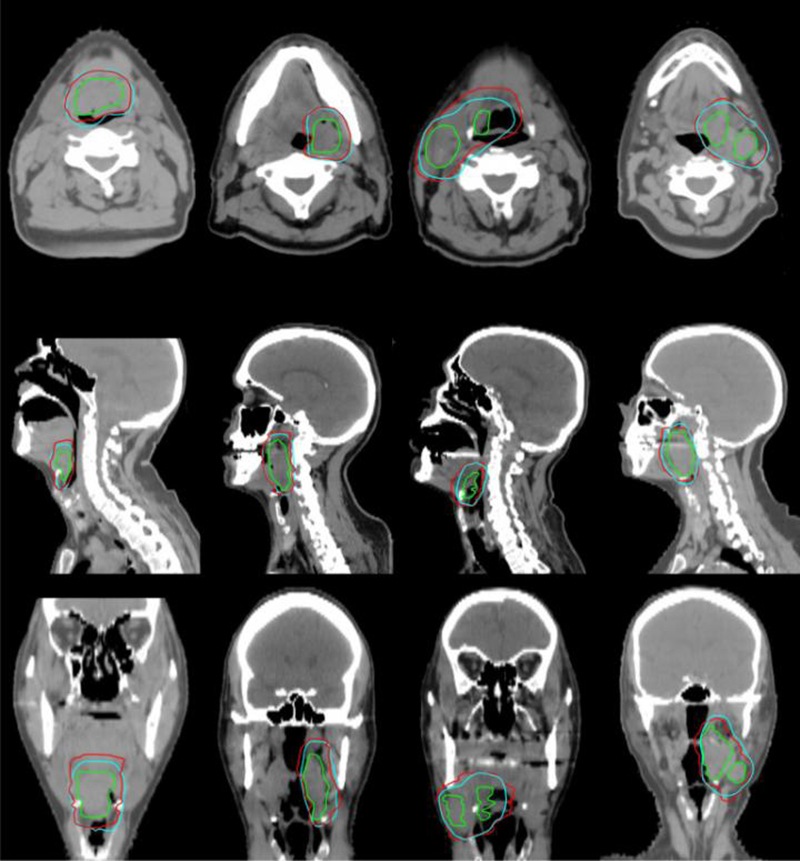 Comparison between predicted ground-truth clinical target volume (CTV1) (blue) and physician manual contours (red) for four oropharyngeal cancer patients. The primary and nodal gross tumor volume is included (green). From left to right, we illustrate a case from each site and nodal status (base of tongue node-negative, tonsil node-negative, base of tongue node-positive, and tonsil node-positive). Credit: Carlos E. Cardenas

Cardenas began the project in 2015 and had quickly accumulated an unwieldy amount of data to analyze. He turned to deep learning as a way of mining that data and uncovering the unwritten rules guiding the experts’ decisions.

The deep learning algorithm he developed uses auto-encoders — a form of neural networks that can learn how to represent datasets — to identify and recreate physician contouring patterns.

The model uses the gross tumor volume and distance map information from surrounding anatomic structures as its inputs. It then classifies the data to identify voxels — three-dimensional pixels — that are part of the high-risk clinical target volumes. In oropharyngeal cancer cases, the head and neck are usually treated with different volumes for high, low and intermediate risk. The paper described automating the target for the high-risk areas. Additional forthcoming papers will describe the low and intermediate predictions.

Cardenas and his collaborators tested the method on a subset of cases that had been left out of the training data. They found that their results were comparable to the work of trained oncologists. The predicted contours agreed closely with the ground-truth and could be implemented clinically, with only minor or no changes.

In addition to potentially reducing inter-physician variability and allowing comparisons of outcomes in clinical trials, a tertiary advantage of the method is the speed and efficiency it offers. It takes a radiation oncologist two to four hours to determine clinical target volumes. At MD Anderson, this result is then peer reviewed by additional physicians to minimize the risk of missing the disease.

Using the Maverick supercomputer at the Texas Advanced Computing Center (TACC), they were able to produce clinical target volumes in under a minute. Training the system took the longest amount of time, but for that step too, TACC resources helped speed up the research significantly.

“If we were to do it on our local GPU [graphics processing unit], it would have taken two months,” Cardenas said. “But we were able to parallelize the process and do the optimization on each patient by sending those paths to TACC and that’s where we found a lot of advantages by using the TACC system.”

“In recent years, we have seen an explosion of new projects using deep learning on TACC systems,” said Joe Allen, a Research Associate at TACC. “It is exciting and fulfilling for us to be able to support Carlos’s research, which is so closely tied to real medical care.”

The project is specifically intended to help low-and-middle income countries where expertise in contouring is rarer, although it is likely that the tools will also be useful in the U.S.

Cardenas says such a tool could also greatly benefit clinical trials by allowing one to more easily compare the outcomes of patients treated at two different institutions.

Speaking about the integration of deep learning into cancer care, he said: “I think it’s going to change our field. Some of these recommender systems are getting to be very good and we’re starting to see systems that can make predictions with a higher accuracy than some radiologists can. I hope that the clinical translation of these tools provides physicians with additional information that can lead to better patient treatments.”