Thanks to an invention by Freiburg scientists, it is now possible to dispense precise dosages of drugs locally in the body. A junior research group from the University of Freiburg’s Cluster of Excellence BrainLinks–BrainTools led by Dr. Maria Asplund and her doctoral candidate Christian Böhler has provided the foundations for a new molecular storage method that could find its way into clinical practice in the foreseeable future. The microsystems engineers, electrical engineers, and materials scientists have succeeded in creating a compound of organic and inorganic materials that is particularly well suited for the compact storage of pharmacologically active substances. The study was conducted in cooperation with a team from the Laboratory for Nanotechnology under Prof. Dr. Margit Zacharias from the Department of Microsystems Engineering (IMTEK) of the University of Freiburg and was published in the journal Scientific Reports. 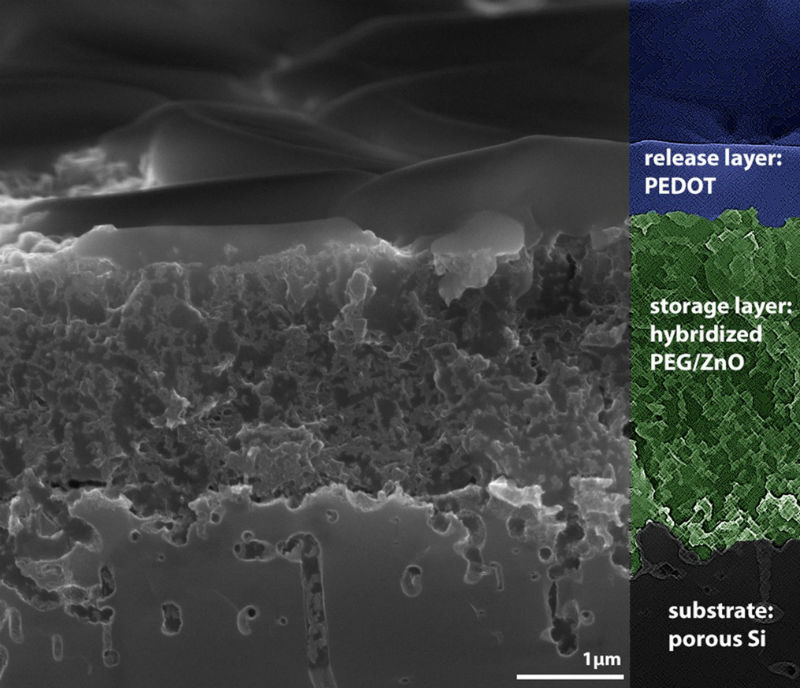 The starting point for producing the storage system was the conversion of a synthetic material from a liquid to a solid state. The researchers succeeded for the first time ever in using so-called atomic layer deposition for a process of this kind. This technique involves applying gases to a synthetic material. The gases penetrate into the molecular structure of the material and strengthen it from the inside. The team used the polymer polyethylene glycol as the starting material. It reacts with zinc oxide in the deposition process to form an organic–inorganic hybrid compound whose molecular structure is suitable for storing drugs or other similar substances. An additional advantage of this material is the fact that it is water-soluble. This makes it suitable for use as a drug carrier, since it is easy to release the substances stored in it again. For dispensing the doses precisely, for example for transport into the bloodstream, the polymer PEDOT is required. This is one of the main emphases of Asplund’s group: “Stated in simplified terms, the polymer works like a net with holes that open when a negative charge is applied and close when a positive charge is applied. This allows the molecules to be released in controlled dosages,” explains Böhler. It is enough to apply two thin films of the polymer to the surface of the hybrid material to ensure that the storage system is sufficiently stable and can precisely control the release of the stored substances.

The team from IMTEK developed a novel technology to improve the storage system: Similar systems produced previously were comparatively less compact, had a smaller storage volume, could not store molecules with different charges, and sometimes caused unintended chemical reactions. The researchers at IMTEK demonstrated in experiments with the substance fluorescein that the multilayered system exhibits ideal properties for dispensing precise doses of a broad spectrum of related molecules at a particular point over a particular period of time. In future experiments, the group aims to determine whether several different molecules can be stored at the same time or in neighboring chambers.

The technology would be particularly useful for so-called lab-on-a-chip methods, which involve the exchange and analysis of substances in a very small space. It could also be used in cancer treatment, for instance to release drugs directly onto a tumor from a reservoir under the skin. Researchers at IMTEK have already conducted tests on cell cultures indicating that the human body would be capable of accommodating an implant of this kind without complications.