Humans have appreciated silver’s antimicrobial activity for millennia. Hippocrates used the precious metal for wound dressings while the pioneers of the American frontier placed coins in their water to guard against bacteria and algae.

But it takes 21st-century technology to push the amount of silver needed to combat disease-causing microbes into the nanoscale realm—something like a sheet of paper divided by 100,000. As researchers explore these limits, they are walking a fine line between silver’s desirable properties and its potential toxicity to the environment.

A perfect case in point is a recent question that Andrea Hicks, an assistant professor of civil and environmental engineering at the University of Wisconsin-Madison, and colleagues set out to answer: What is the environmental impact of nanoscale silver-coated reusable hospital gowns, compared to the single-use disposable gowns employed by 80 percent of our hospitals, when the goal is to reduce the incidence of hospital-acquired infections?

These nosocomial infections cause an estimated 99,000 deaths per year in the United States; combined with other forms of medical error, they are considered the third-biggest killer after heart attacks and cancer. “It’s one of these silent things that most people don’t think about,” Hicks says. “But the rise of MRSA, or methicillin-resistant Staphylococcus aureus, a few years ago illustrates the importance of preventing hospital textiles from transmitting pathogens.”

Since most nanosilver textiles lose some of their silver coating every time they’re laundered, Hicks zoomed in on a novel technology that aims to solve this problem. “The nanosilver solution we studied is sold with a chemical linking agent,” Hicks explains. “You put the silver and linking agent into an industrial washer, along with the reusable hospital gown, and it will re-coat the textile every time.”

Hicks used a tool called life cycle assessment to model the energy required to produce the two types of hospital gown—silver-coated reusable versus disposable—and the energy needed to maintain and eventually dispose of them. The concept of “embodied energy” is a commonly used metric for comparing the environmental impact of different products. 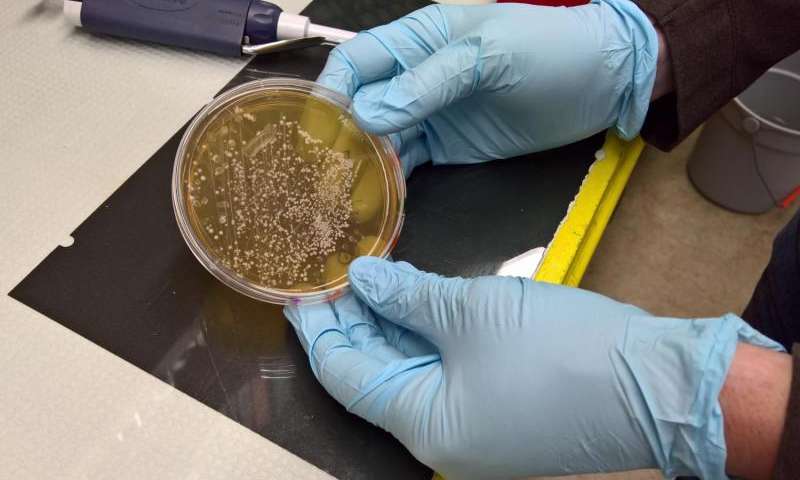 After a single use, a disposable gown ends up in the landfill, while a reusable gown is laundered an average of 75 times before it is discarded. Taking into account the greater amount of energy needed to produce and maintain the reusable gown, Hicks found the break-even point, or environmental parity, to be about 12 wearings.

“After 12 uses, the reusable gown has a lower environmental impact than the disposable gown,” Hicks says. “The longer it is in use, the greater the difference will be.”

The exact difference depends on how often the silver has to be reapplied to maintain its antibacterial properties. For the current study, the researchers estimated this quantity from the amount of silver needed to inhibit the growth of E. coli, one of the best-characterized human bacteria. The environmental parity point would likely change if other pathogens were considered.

The environmental impact also depends on the chemical form in which silver is released during the gown’s use phase. From the wastewater treatment plant, the laundry water is ultimately discharged into a natural body of water. The researchers assumed a worst-case scenario of ionic silver—more toxic to fish and other aquatic organisms than silver chloride or silver sulfite—being released at that time.

While the environmental scale tipped in favor of nano-enabled reusable gowns under these assumptions, Hicks considers it premature to endorse their large-scale adoption. “We need to better understand how well they protect against hospital-acquired infections and how to prevent the silver from harming the environment or our own bodies before deciding whether the benefits outweigh the convenience and lower cost of disposable gowns,” she says.

Hicks plans to pursue these questions in future work, but won’t limit herself to nanosilver textiles. “I enjoy studying novel consumer technology, whether it is used in textiles, plastic containers, coffee pods or light bulbs, because estimating a new product’s environmental legacy is an important aspect of bringing it to market,” she says.