The PCR technique has given medical doctors and researchers a powerful tool to detect specific DNA sequences in a sample. With PCR, they can determine, for example, if a blood sample contains a virus (and in which quantities). Or they can examine the genetic makeup of a patient’s tumor, to choose the best-matching treatment. In 2013, engineers from imec and Panasonic succeeded in integrating the technique on a chip using silicon microfluidics, albeit still with external heaters and pumps. Imec’s scientists are now working on fully-integrated PCR for use in lab-on-chip solutions. And they are looking to bring other PCR techniques to chip, such as digital droplet PCR.

PCR Finds the Needle in the DNA Haystack
PCR – shorthand for polymerase chain reaction – is used to amplify a few copies, or even a single copy, of a specific piece of DNA across several orders of magnitude, generating thousands to millions of copies.

The method relies on cycles of repeated heating and cooling.

Heating causes a DNA string to melt, i.e. to split into its two constituting single strands. After subsequent cooling to the appropriate temperature, primer sequences attach to the single strands. These primers are short strings of DNA material that are designed so that they will only stick to the beginning or end of the DNA sequence that is looked for. They form the starting point for a polymerase enzyme that will complement the single strand – beginning from our target sequence – into a double-helix DNA.

Then the thermal cycle starts again, every time doubling the sequence flagged by the primers. In a typical PCR reaction, the sample may go through 30 such thermal cycles, taking some 30 minutes to finish. If the target DNA sequence was present in the sample, it will now be available in millions of copies, so that it can be detected using optical or electrochemical techniques. 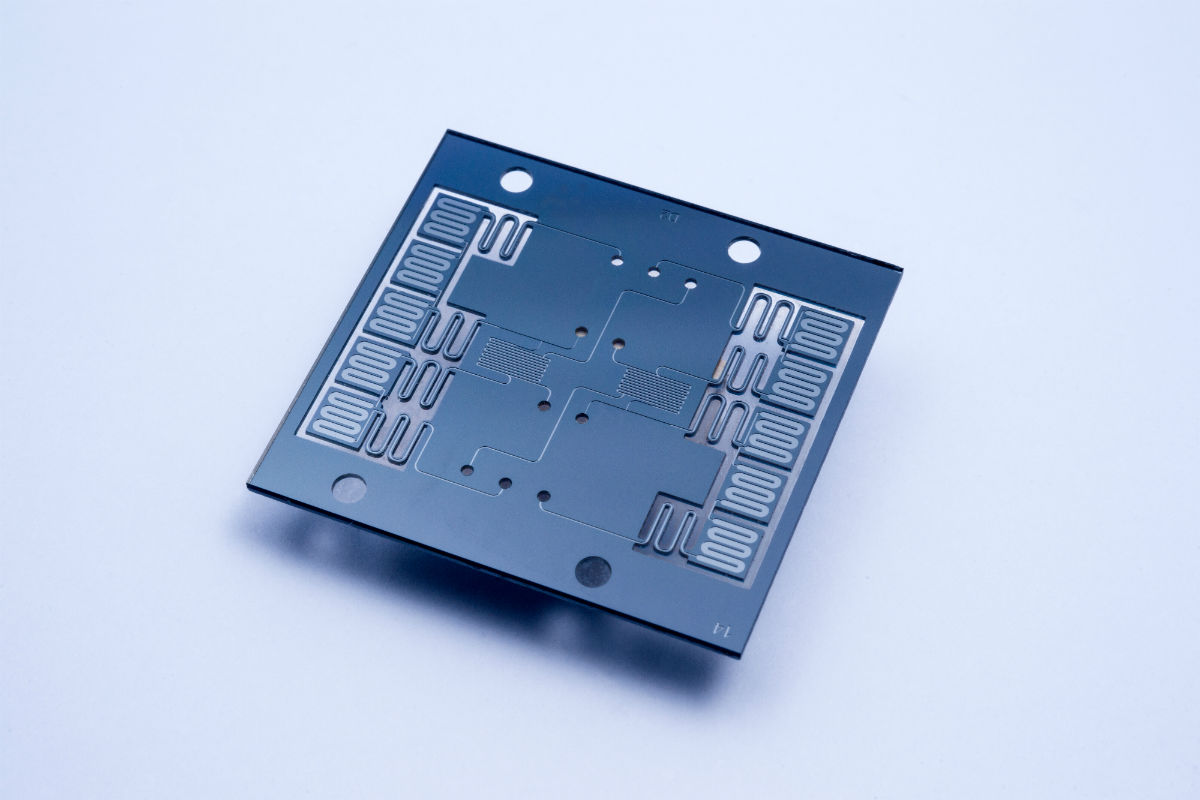 Transferring PCR to Silicon Chips
Two years ago, imec and Panasonic succeeded in building a PCR lab-on-a-chip for the detection of single nucleotide polymorphisms (SNPs). These are variations in DNA of only one base-pair. Determining these SNPs is important when moving to personalized medicine where patients receive drugs not only based on their disease but also on their personal genetic profile.

In contrast to most other lab-on-chips, which are made from polymers, imec and Panasonic chose to make their chip through microfluidics etched in silicon and closed with glass. This technique is more costly and complex, but offers much better prospects for mass production and integration with other lab-on-chip components, with imaging technology, biochemical sensing, or signal processing.

To fabricate designs like these, imec developed a process flow which allows making both coarse structures (500 to 3 micrometer) and fine structures (3 down to 0,5 micrometer) in the same process flow, using deep reactive ion etching. The process enables aspect ratios up to 40, which is necessary to fabricate high and narrow micropillars that are used as filters. In addition to these filters, we can make a great many functional structures in all dimensions: microchannels, mixers, microreactors, capillary pumps and valves, droplet generators, mergers and splitters. After testing and fine-tuning, this is now a stable and versatile process that can be used for a wide variety of microfluidic designs.

One such design is at the heart of imec and Panasonic’s PCR tool. The chip is mounted with heaters and a plastic layer containing pumps and valves, to inject the sample and bring the results to the readout. Then this assembly is mounted on a PCB and operated from a small desktop cabinet. The microfluidic chip itself contains mixers, PCR chambers, and filters. The mixers make a homogeneous fluid from the blood sample and added chemicals. In the PCR chamber, the fluid is repeatedly heated and cooled while the primers and polymerase multiply the DNA. And the filter separates the resulting DNA strings by length. The tool performs 30 thermal cycles in about 9 minutes, which is a substantial improvement over commercial SNP-detection tools.

Since then, imec’s scientists have extended their PCR technology. They have tackled other PCR techniques besides SNP detection. And they are working to fully integrate PCR technology, including e.g. the heaters and pump technology.

From Quantitative PCR to Digital PCR
SNP detection will tell you if a specific base-pair is present or not. But it will not reveal how much of a certain DNA (e.g. HIV virus DNA) is present in a sample. That is done by qPCR (quantitative PCR), using fluorescent markers. These markers will result in an optical signal, a signal that gets stronger as the DNA is multiplied. By timing precisely when the light intensity crosses a threshold, it is possible to determine how much DNA was present to begin with.

qPCR is a robust and well established technique. It can be implemented with a comparable silicon microfluidics platform than the one used for the SNP chip. And compared to commercially available qPCR tools, the efficiency of a chip-solution proves equivalent. However, the technique has some drawbacks that make it a lengthy and cumbersome procedure, even if carried out on a lab-on-chip. The most important is the need to compare the light intensity with accurate calibration curves, curves that have to be made through additional, very precise experiments.

An alternative is to use digital droplet PCR (ddPCR). The idea is to divide the sample into many small droplets, so that each droplet contains none to at most a few units of the target DNA sequence. Then a PCR is done on all droplets, so that it becomes possible to see which droplets have target DNA and which don’t. By using the ratio of positive droplets to the total number of droplets, and applying Poisson statistics, the DNA concentration in the original volume can be calculated.

To implement ddPCR, imec has collaborated with Panasonic and Janssen Pharmaceuticals to extend its microfluidic toolbox with a uniform droplet generator. This droplet generator is formed by a T-shaped channel that injects the PCR sample with fluorinated oil mixed with appropriate surfactants. The channels currently-used are 30 micrometer wide resulting in droplets of 50 to 200pL. These droplets then stream further and are collected in the S-shaped PCR reactor, which occupies a 3x3mm area. The optical fluorescence read-out is done using a CCD camera coupled to a microscope. The resulting fluorescent image is then analyzed to count the number of droplets and their fluorescence intensity.

With ddPCR, it is thus possible to measure the quantity of a DNA sequence in a sample without having to use calibration curves. And also in contrast to qPCR, it can be used to detect two DNA variants even if one is much less available than the other. In this type of multiplexed PCR, two fluorescent colors will be used. If the droplet size and DNA dilution is chosen well, there will be a number of droplets in which the rare variant shines out.

Further Integration
In the above designs, the heart of the PCR tool is formed by a microfluidic chip. But this chip still needs external heaters to drive the thermal cycles, pumps and valves to inject the sample in the chip, and readout tools (e.g. camera and microscope).

Imec’s bioelectronics specialists are now working on integrating these elements on the chip, developing a veritable, stand-alone PCR chip which could be used alongside other tools in microsized integrated lab equipment. A chip also that can be fabricated in a CMOS-compatible process flow, allowing mass fabrication of highly identical precision tools. Our first test runs with integrated aluminum heaters show great potential. And to replace the pumps, we are experimenting with designs in which the sample moves through the channels through capillary forces only. Equally important is integrating more of the DNA analysis flow in the chip. This includes, on the one end, DNA extraction from biological material, and, on the other end, the results readout and analysis.

PCR on chip allows a much faster analysis than with larger, desktop-sized tools. An analysis also that automates a number of error-prone interventions by lab technicians. And with the promise of mass-fabrication, such tools can be brought to the point of care, as part of the infrastructure needed for a more personalized and efficient diagnosis and therapy.