Keeping focused while endeavoring to complete a task can be difficult—especially when you’re like me and work behind a computer all day with the entirety of the Internet’s distractions at your fingertips. It’s so easy to get lost in myriad cat videos, clickbait news stories, and the like, and before you know it you’ve wasted an hour of time being distracted.

Further proving that wearable technologies can become more than just fun little gadgets, a partnership between Device Solutions and the aptly named FokusLabs has created RE-vibe, an anti-distraction bracelet that uses slight wrist vibrations to remind wearers to get back on task. After a successful round of funding on Kickstarter, it’s finally made its way to the marketplace, rolling out on Tuesday.

The device was initially designed by former school psychologist-turned co-founder and CEO of FokusLabs Rich Brancaccio to help children stay on task at school. While it’s a handy way to keep kids with a nose in their books, RE-vibe sets out to help children with autism and ADHD, notorious sufferers of attention and focus problems.

Before you ask whether the device is meant only for children, popular demand for the device spurred Brancaccio to design an adult version, as well. (Kids aren’t the only ones who get distracted, I say, staring out the window next to my desk.)

Wearing the wristband should be anything but distracting; it weighs less than half an ounce and lasts over a week on a single charge. (RE-vibe’s smart enough to know when it’s actually on the wrist, and saves power when not in use.) It comes pre-programmed with three settings depending on the wearer’s severity of distraction: mildly, moderately, and severely off-task. Toggling these settings determines how often to send reminding vibrations, and how intense the vibrations should be. It also includes a homework mode, and only requires one touch to program. 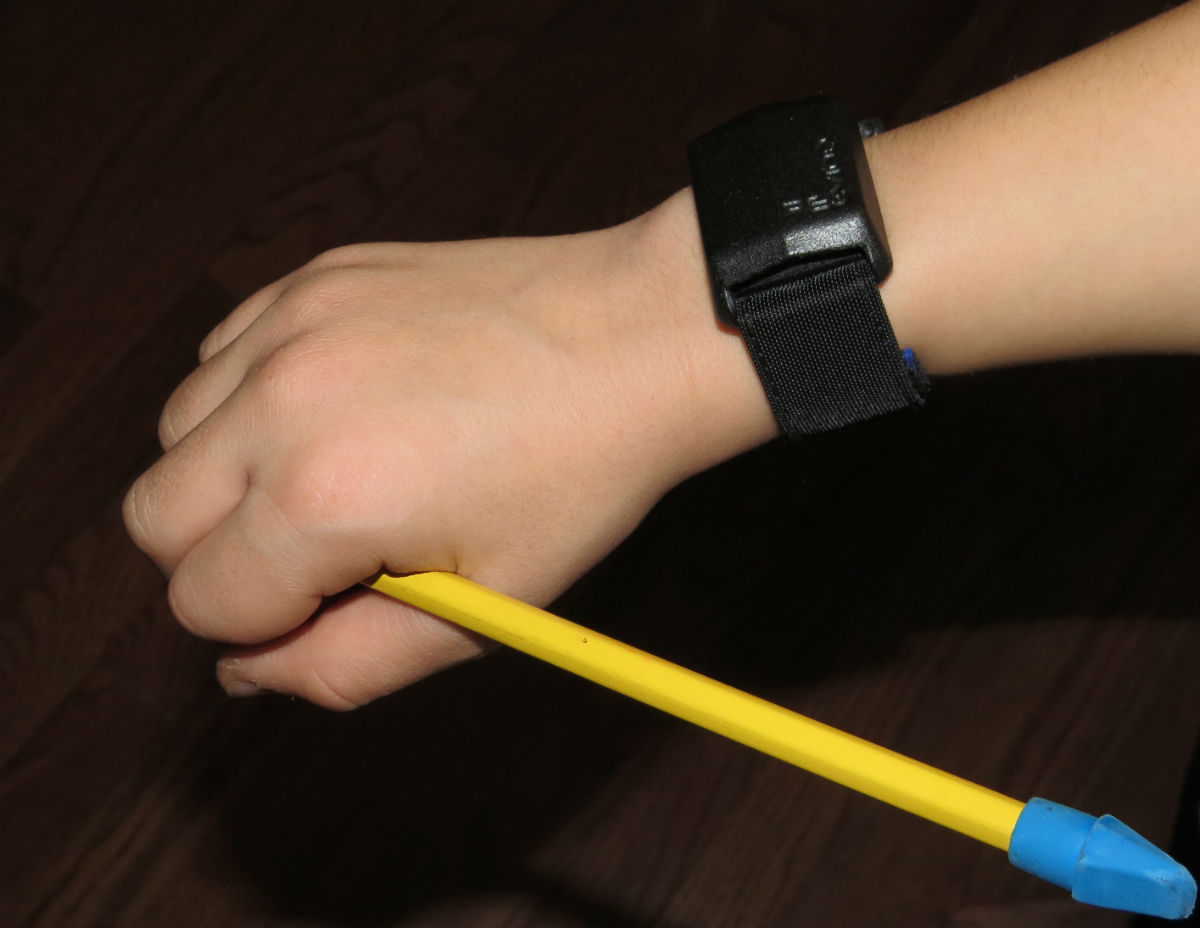 Clearly this wearer is distracted; they’re not even writing on anything. (Credit: FokusLabs)

“On the first day of wearing it (a weekend), it took a little getting used to, as I could tell when he was getting reminders, and being distracted,” reports early user Clifford Beaman of his eight-year old son. “However, on the second day (at school), he came home and volunteered that several times a day he was reminded to get back on task, and got back to doing what he was supposed to do.”

RE-vibe doesn’t actually “sense” when the wearer is off-task, but rather uses an estimation algorithm based on FokusLab’s research in the school setting to remind you to ask yourself if you’re on task. And I know what you’re thinking—the constant buzzing will eventually become easy to ignore. FokusLabs mentions that their “patent-pending, research-based algorithm” allows randomization of vibration settings to make sure the wearer doesn’t become accustomed to the reminders.

RE-vibe can be quite helpful even if you don’t have a problem focusing. (I seriously envy those types of people.) It’s also designed to let wearers know to take a break, rest their eyes, or move along to another task.

If you were too distracted to come up with a Christmas present and know of someone who might benefit from RE-vibe, perhaps consider it as a last minute gift. As for me, I’ll be doing my best to stay focused until the holidays and not let my mind wander to holiday cheer, presents, eggnog, Christmas dinner…