When emergency tests showed the telltale right-sided pain in Heather VanDusen’s abdomen was appendicitis, she figured she’d be quickly wheeled into surgery. But doctors offered her the option of antibiotics instead.

A new study from Finland shows her choice is a reasonable alternative for most patients with appendicitis. Five years after treatment with antibiotics, almost two-thirds of patients hadn’t had another attack.

It’s a substantial change in thinking about how to treat an inflamed appendix. For decades, appendicitis has been considered a medical emergency requiring immediate surgery to remove the appendix because of fears it could burst, which can be life-threatening.

But advances in imaging tests, mainly CT scans, have made it easier to determine if an appendix might burst, or if patients could be safely treated without surgery.

The results suggest that nearly two-thirds of appendicitis patients don’t face that risk and may be good candidates for antibiotics instead.

“It’s a feasible, viable and a safe option,” said Dr. Paulina Salminen, the study’s lead author and a surgeon at Turku University Hospital in Finland.

Her study in adults is the longest follow-up to date of patients treated with drugs instead of surgery for appendicitis and the results confirm one-year findings reported three years ago.

Research has also shown antibiotics may work for some children with appendicitis.

The Finnish results were published Tuesday in the Journal of the American Medical Association. 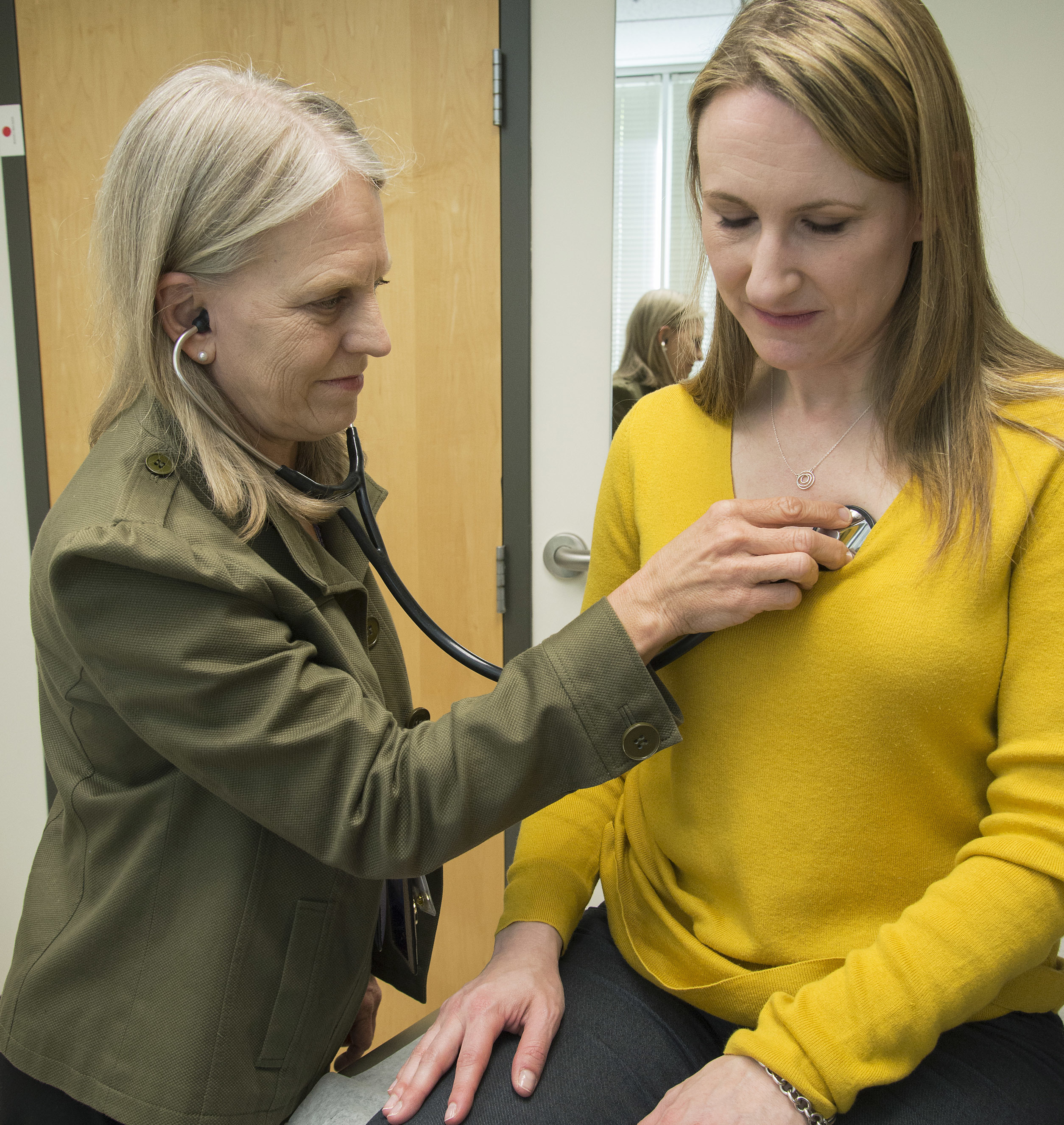 In this 2016 photo provided by the University of Washington, Dr. Linda Vorvick examines Heather VanDusen at UW Neighborhood Clinic in Seattle. When emergency tests showed the telltale right-sided pain in VanDusen’s abdomen was appendicitis, she figured she’d be quickly wheeled into surgery. But doctors offered her the option of antibiotics instead. (Clare McLean/UW Medicine via AP)

Appendix removal is the most common emergency surgery worldwide, with about 300,000 performed each year in the United States alone, said Salminen. She said the results from her study suggest many of those surgeries could be avoided.

U.S. doctors have started offering antibiotics instead of surgery and Salminen says she occasionally does too. The journal editorial says appropriate patients should be given that option.

The study involved about 500 Finnish adults who had CT scans to rule out severe cases.

Half were treated with antibiotics; the others had surgery.

Among the antibiotics patients, 100 ended up having surgery within five years of treatment — most for a suspected recurrence of appendicitis in the first year. Seven of them did not have appendicitis and likely could have avoided surgery. The results suggest the success rate for antibiotic treatment was almost 64 percent, the authors said.

About 1 in 4 surgery patients had complications, including infections around the incision, abdominal pain and hernias, compared with only 7 percent of antibiotics patients. Antibiotic patients had 11 fewer sick days on average than the surgery group. In the first year, their treatment costs were about 60 percent lower. A cost analysis for the full five years wasn’t included in the published results.

Surgery patients in the Finnish study all had conventional incisions rather than the less invasive “keyhole” surgeries that are more common for appendix removal in the United States. The non-surgery patients received three days of IV antibiotics in the hospital, followed by seven days of pills at home.

Dr. Giana Davidson, a University of Washington surgeon, is involved in a similarly designed multicenter U.S. study that may answer whether similar benefits would be seen for antibiotics versus “keyhole” surgery.

Davidson called the Finnish study “a critical piece to the puzzle but I don’t think it answers all of the questions.”

Heather VanDusen was treated at the University of Washington in 2016. She said she chose antibiotic treatment partly to avoid surgery scars, and now offers advice to patients for Davidson’s study.

“I knew the worst case scenario was ending up back in the hospital so why not try antibiotics first,” said VanDusen, who works in university communications.

She said she has done well since her treatment, but that the biggest drawback “is wondering, with every episode of stomach or bad gas, if it could happen again.”