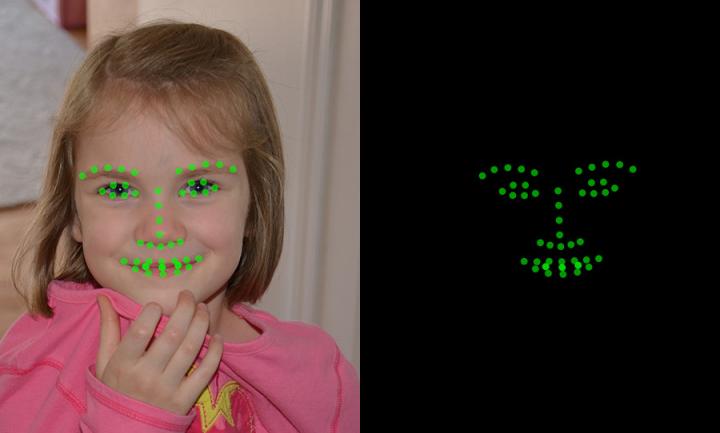 The “Autism & Beyond” app uses an iPhone’s self-facing camera to assess a child’s emotional state while viewing various stimuli. The dots are landmarks automatically placed on a video of the child by the software. (Credit: Autism & Beyond)

There’s an app for everything these days–from weight loss to working out. Now, thanks in part to support from the Office of Naval Research (ONR), there’s an app that may screen for autism by reading kids’ facial expressions for emotional cues.

“The long-term implications of this research are huge,” said Dr. Predrag Neskovic, a program officer in ONR’s Mathematical Data Science program. “Not only could the app be used to learn more about childhood autism, it could possibly reveal signs of post-traumatic stress disorder [PTSD] and mild traumatic brain injury [TBI] in warfighters–conditions that often have subtle symptoms and are difficult to diagnose.”

The app, called “Autism & Beyond,” was developed by researchers and software developers at Duke University and the Duke Medical Center. It currently is available for free download from the Apple App Store to families wishing to participate in a six-month medical research study by Duke University.

“Autism & Beyond” has children complete a series of questionnaires and watch short videos designed to make them smile, laugh and be surprised. Parents or caregivers use an iPhone’s user-facing “selfie” camera to record children’s facial movements for evaluation by doctors, researchers and software.

“We analyze the video to track position and movement of the head and face, including the lips, eyes and nose–all of which indicate emotions,” said Dr. Guillermo Sapiro, a professor at Duke University, who developed the algorithm. “For example, while watching stimuli like a funny video, does the child smile, look toward the caregiver or ask the caregiver to view the video as well? We study all of that. Lack of emotion and social sharing are possible characteristics of childhood autism.”

Sapiro stresses the app isn’t a self-diagnosis resource, but is intended to serve as a potential screening tool for autism and other developmental challenges, and encourage users to contact a physician for specialized testing.

Once the autism studies are complete, Sapiro hopes to eventually expand and tailor the app to conditions suffered by warfighters, including PTSD, TBI and depression. As with autism, facial expressions can indicate the presence of such disorders. For example, many individuals suffering from PTSD or depression smile often, but their grins tend to be forced and short. Improved analysis of such facial expressions could lead to more accurate diagnoses by doctors and, consequently, enhanced treatment options for military personnel and veterans.

“The great thing about the algorithm and video analysis tool is they can be universally applied to various research apps and studies,” said Sapiro. “Today it’s autism, in the future it could be PTSD. How can we take ‘Autism & Beyond’ beyond its current state and to the next level? Autism is just the start.

“We hope to find the right partner and develop a research app studying PTSD,” he continued. “We’ve already received interest from a nearby Veterans Affairs center about using this technology in veterans’ homes to monitor behavior for signs of depression.”