Things have evolved, is what Dr. Victor Fura, board-certified internist, nephrologist, and inventor of the Wearable Artificial Kidney (WAK), stated in his session, Unmet Needs of Wearable Organs, at MD&M West 2019. While reminiscing and going through medical devices of the past, Fura notes that the very first pacemaker was as large as a washing machine.

“At first, you couldn’t go around and go shopping at Walmart with these things,” says Fura. “But things have evolved.”

Today, there are implantable pacemakers with electrodes and a battery that will keep pumping even if someone passes away from something else. This instilled an idea for Fura.

“Why not take a dialysis machine and make it smaller, like a wearable?” he asked.

Cue WAK, a portable device that gives patients the freedom to perform daily tasks while experiencing the benefits of dialysis throughout the day. Rather than visiting a doctor’s office three times a week for four hours each time and sitting uncannily still while your body gets drained of extra fluid, Fura created a wearable that continuously performs dialysis.

WAK, an 11 lb. wearable, eliminates fluid to reduce strain on the kidneys, lungs, and heart while also reducing blood pressure. Powered by 9-V batteries, the WAK uses a tiny fraction of the amount of fluid required by conventional dialysis. Rather than going into a doctor’s office, the WAK wearable acts like a healthy kidney.

According to Fura, healthy kidneys remove water at a rate of 50 to 100 cc per  hour. “In a normal day, we drink fluids, and a healthy kidney needs to remove one to two liters of water within those 24 hours. If you remove two days’ worth of fluids, that’s between three and four liters of water, and with dialysis this needs to be done within a four hour time period. This process is extremely strenuous for an individual to go through.” Fura adds that after dialysis individuals can be “as sick as a dog” and extremely tired. “The next day they may feel a little more energized, but then the third day they have to undergo dialysis once more. It’s extremely hard to maintain a job and even more difficult to perform everyday tasks,” he says.

The WAK provides continuous renal replacement 24/7 and delivers 168 hours per week of blood filtration, just like a healthy kidney would. Because it works on batteries and requires about 400 mL of water, it neither requires a hookup to an electrical outlet, nor requires 40 gallons of fresh water like current machines do. The device also removes phosphorus, similar to a healthy kidney, so patients don’t need to take unnecessary medications.

Additionally, the WAK utilizes a dual-lumen catheter, and only 400 cc of sterile water, 0.45 percent NaCl priming solution, and heparin via a syringe pump are needed. The device works by using blood from the catheter that is anticoagulated using the heparin pump. A shuttle pump then pumps blood through the dialyzer, and the blood is reconstituted with electrolytes and returns to the patient. The dialysate goes through the dialyzer and the spent dialysate goes to the dialysate regenerating system to be used again with any excess dialysate discarded into the ultrafiltration bag. The system also has alarms that alert if there are any leaks or bubbles. 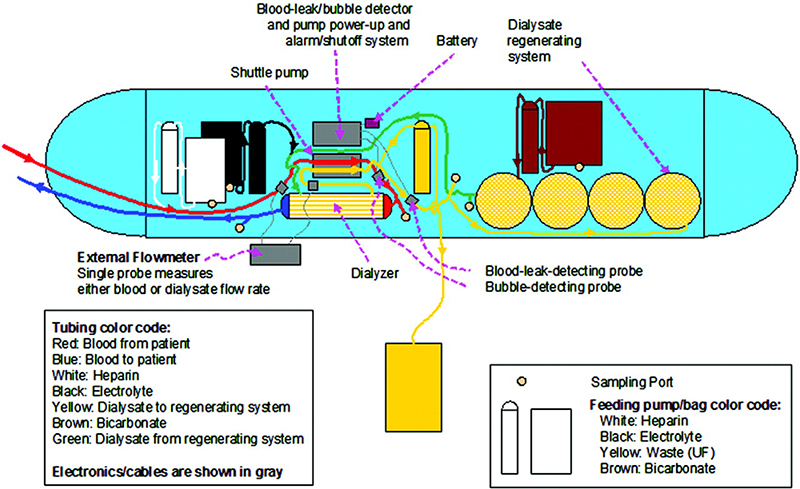 A breakdown of the WAK device and how it works.

Once the device had come to fruition, it was time to test it to ensure it worked effectively.

After testing their device on their first patient, a dummy, they moved to testing the wearable kidney on an actual individual.

“Our first human ever, we were very nervous,” says Fura. “But he walked and moved around with the wearable, and after a while he asked to go to the bathroom.”

At this point, the patient was still being monitoring during his bowel movement to ensure the device would still work during his bathroom break. The patient then asked for a phone, called his wife and said, “Guess what I’m doing while having dialysis?”

Fura says although this story is humorous, the reality of dialysis is sitting in a chair for four hours at a time and not being able to move despite having bowel movements.

Although the WAK has been successful, Fura says there are still design challenges, especially while creating WAK 3.0, which is still under development.

“Our main pump, our main invention, didn’t work well with the 3.0,” says Fura. “So, we had to redesign that, because the 11 lb. device was too heavy. Imagine trying to get onto a bus in Jerusalem or onto a plane with that thing. We wanted something that wasn’t that obvious, and at the end of the day, we have to please the patients. So we had to come up with something smaller.”

In order to accomplish this, WAK 3.0 will encompass a day mode and night mode. For the day mode setting, the device is approximately three lbs., is very light, and accomplishes pertinent functions that are performed during the day. The night mode is heavier, but this allows the device to get charged and perform chemical tasks that can be done while sleeping so wearers don’t have to run around with the heavier part of the device during the day. Fura says they are two clinical trials away to completing a total of five US clinical trials, and within two years, they should have enough funding for the next round of bringing WAK 3.0 to the market.

Overall, Fura believes there is very much a future in wearable organs.

“It’s not a dream,” says Fura. “This is very doable; we just have to try harder.”