The microplate is a standard tool in analytical research and clinical diagnostic testing laboratories. Since the first 12-well plates were developed in the 1950s, plate densities have increased steadily, and their use and popularity has grown exponentially. As well density and the amounts of material tested have grown, so has the need for automated plate handling equipment.

A microplate is characterized by the number of wells it contains. These wells are always arranged in a rectangle format with a row to column ratio of 2:3. Although plate dimensions can vary slightly from one manufacturer to another, a typical microplate measures 3.3 by 5 inches. Plate height varies with density; low density plates have deeper wells than higher density plates. Given that the well spacing of a plate remains constant, the distance between wells for a given plate decreases with density. Standard, commercially available microplates can have well densities of 6, 24, 96, 384, or 1,536. Although higher density plates with 3,456 and 9,600 wells have been fabricated, they are not considered standard within the industry. 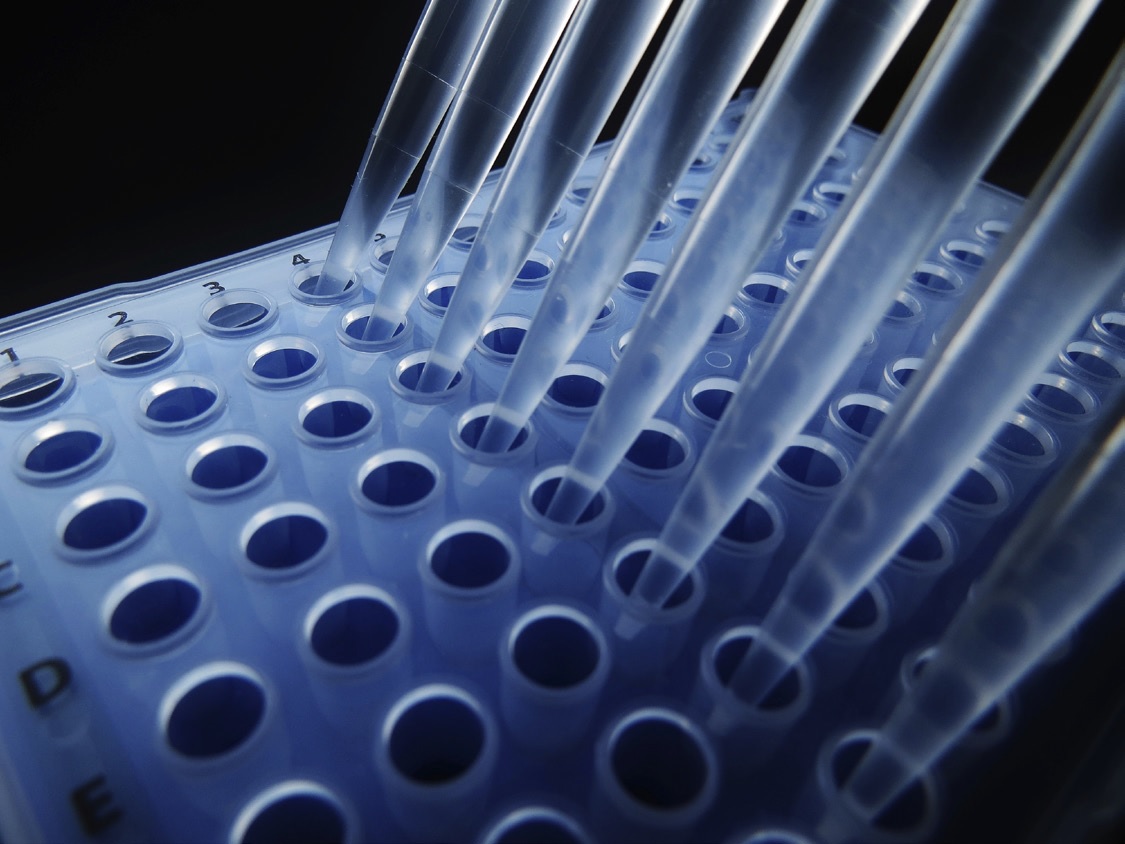 The 96-well plate is the most common form factor used in laboratories today.

Properly designed automation systems can be invaluable in plate handling, offering users a variety of advantages over manual processes:

Although the potential benefits of automating the testing of microplates are obvious, it’s critical to be cautious about how any given technology is applied to a diagnostic equipment challenge to prevent later problems or unnecessary cost. For example, every instrument design or modification should begin with an assessment of the critical performance specifications. Payload, precision, throughput, duty cycle and expected life are among the questions a designer should ask when optimizing a motion system for handling microplates.

A custom-designed dispenser tip finder board, integrated into a cell-selecting robot.

Well Plate Geometry
Although 1536-well plates aren’t currently widely used, there has lately been a big industry push to adopt this format, given its very small working volumes and high testing efficiency. The well-to-well spacing is just 2.25mm and the well diameter is just 1.7mm. Although these measurements might seem very small, even the coarsest drive train technology with ±0.5mm bi-directional repeatability can meet the required positioning needs, so long as the relative positions can be taught via the motion controller.

Repeatability Considerations
The precision of the motion system is far from the only critical consideration in dispensing applications. Positional errors are often compounded by any irregularities that result as a droplet forms from a dispensing tip. Tighter control over the motion of a well plate will allow for looser control of droplet ejection and vice versa. That being said, even the coarsest motion system drivetrain is sufficient to meet the repeatability constraints of the well plate. However, this assumes tight control over droplet ejection and the ability to locate the tip of the dispensing head very accurately. Proper fluid system design is essential to correct droplet ejection. Given that dispensing heads are often constructed from a thin plastic or metal needle, the center of the tip can skew slightly from the manifold where it’s attached. To prevent this, some manufacturers are creating miniature circuit boards with integrated sensors designed for finding the tip accurately. Again, from the standpoint of repeatability, any drive train will work to position a dispensing head over a well, based on current commercial well plate geometries; however, as higher well plate densities and smaller well diameters become more common, the drive train type used will become an increasingly critical design consideration. 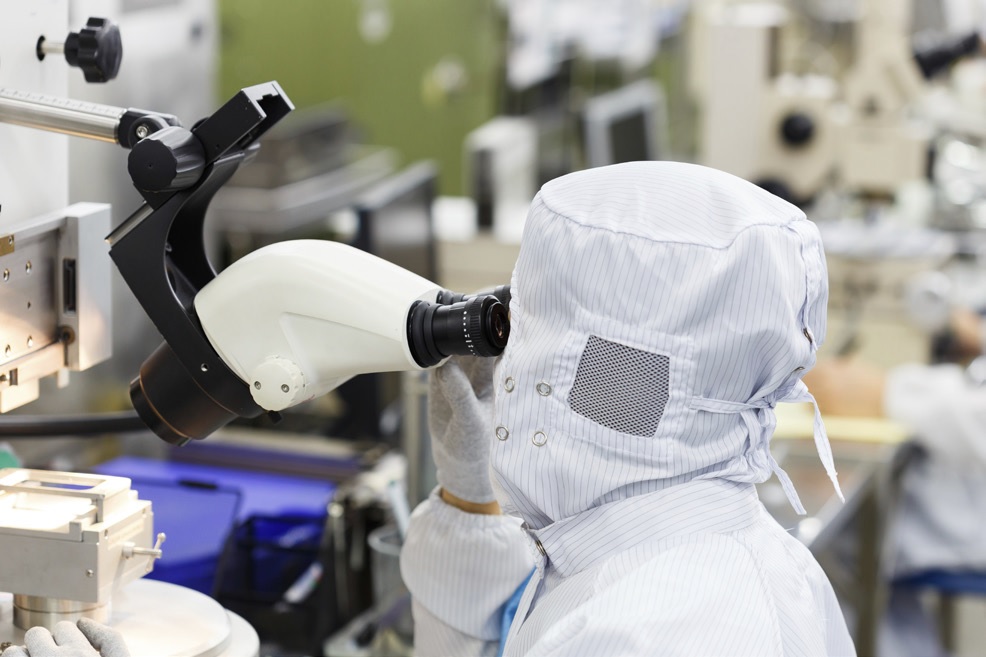 Instruments developed for clean room environments must be constructed out of materials and components that avoid contaminating samples. Factors like air flow, orientation, speed, and payload can also play a role in particulate generation.

Focusing In
Some 96-well plates are specially designed for viewing fluorescent, cell-based, or immunoassays from below using scanning optics. For applications that depend on detecting an individual cell or a cluster of cells, a high level of precision is required, given that body cells can range from just 10 to 100 microns in size. For these applications, motion systems that offer low repeatability and high resolution are desirable to allow the technician to home in on the point of interest. As a general guide, the motion system should be repeatable to one-tenth the size of the point of interest. Likewise, the motion system should offer about ten times the resolution from its feedback device for adequate control. Designers should choose either precision ball screw or linear motor-driven positioning devices to achieve the precision of motion required for these imaging applications. For applications that require high throughput and high precision imaging, linear motor drives are somewhat more desirable because they have the advantages of significantly lower velocity ripple and higher frequency response over ball screw drives.

Sterility
Certain assays are extremely sensitive to contamination, so most well plates are designed to be sterilized. Beyond the risk of carry-over from well to well or sample to sample, instrument builders should also keep in mind that a motion system or moving parts can often generate miniature particulates that could circulate within the instrument, with the potential to compromise an assay. Motion systems can also be designed to minimize particulate generation; linear motors with fixed stators are generally the best approach of all the drive train technologies because they employ limited wear components. Positioners are available that are capable of clean room ratings down to Class 10.

Some well plates are covered with a thin protective foil layer to guard against contamination. Although the force needed to puncture this foil or covering might seem minor, if a machine is designed with multiple dispenser heads that must puncture multiple coverings at once, the compounded force could become quite high, especially for higher density plates. Likewise, if the machine needs to change tips, the force to mount or remove tips can also be quite large when compounded into one operation. Assume, for instance, that it takes four pounds of force per tip; to mount a tip to a needle, it would take 384 pounds of force to mount 96 tips simultaneously. Imagine the force required to mount 384 or 1,536 tips under the same circumstances! As a result, the motion system would need bearing support that could manage this force in all relevant directions. Given their high thrust density, screw-driven positioners are ideal for these applications. A screw supported by angular contact bearings and a higher capacity bearing spread over multiple rails are also preferable to handle larger thrust loads. 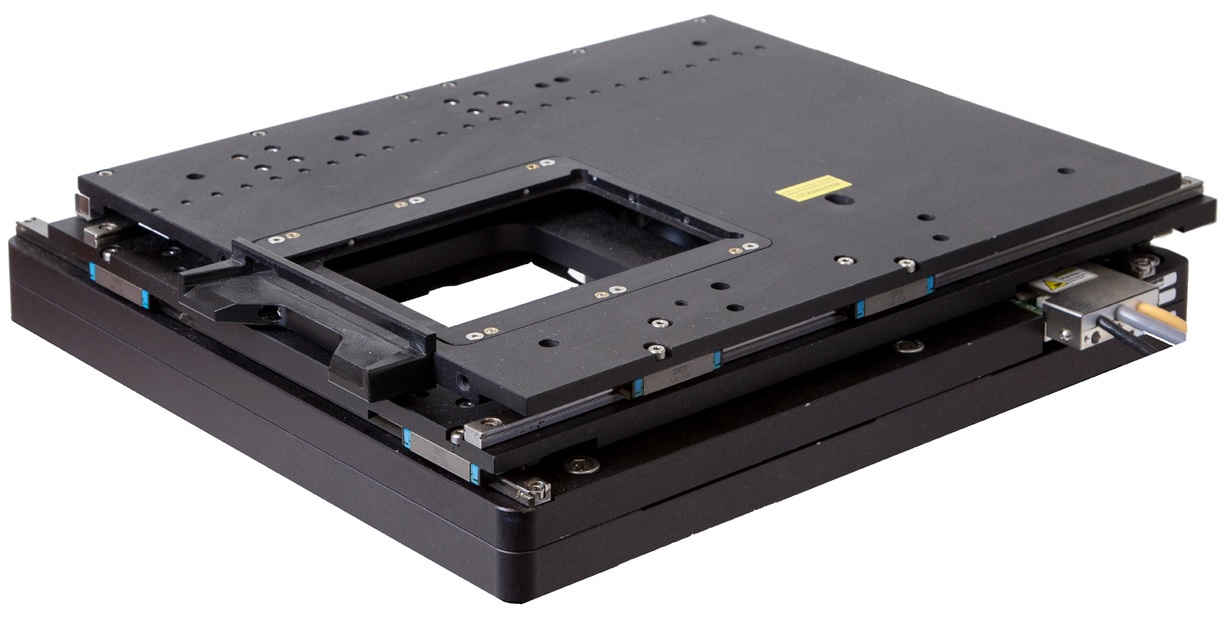 Low profile XY stages like this one are often used in digital pathology equipment.

Cost
Machine builders rarely have the luxury of not worrying about how much something costs. The largest driver of cost for any drive train technology is the level of precision it offers. Linear motor stages are typically among the most costly because of their use of rare earth magnets and linear encoders, among other reasons. Linear motor stages must also be paired with a servo drive, unlike other stage technologies, which offer the flexibility of being paired with either a servo or a less expensive stepper motor. Even though linear motors are among the most expensive technologies, they offer the best payback, given the throughput they can offer. The ball screw is a slightly less costly technology, but precision ball screws and the mounting of them are relatively expensive. One advantage ball screws have over linear motor-driven systems is that they can be driven with either a servo or stepper motor, but they lack the responsiveness and smooth motion possible with a linear motor.

When speed is more important than precision, belt-driven motion can be a good option. However, belts are very limited in their frequency response and may take some time to settle into a given position. Lead screws are often as affordable as belt drives, but lack the precision, speed, and duty cycle that the other technologies offer. Lead screws might work well in applications using 96-well plates and limited throughput.

Future Trends
Currently, a wide array of technologies can be applied to instruments moving a 96-, 384-, or 1,536-well plate due to their relatively loose positioning requirements, but as we look to the future and 3,456- and 9,600-well plates, instrument builders need to consider higher precision technologies like ball screws and linear motors to address the positional requirements for these higher plate densities. Payloads are often relatively light when simply transporting microplates; however, if the application requires any quantity of tip loading, unloading, or requires multiple tips to puncture a protective cover over the plate, higher capacity bearings and ball screws may be necessary to handle larger thrust loads.

This article appeared in the April/May issue of MDT.