Mosquitoes are deadly efficient at spreading disease. Despite vaccines and efforts to eradicate the pesky insects, they continue to infect humans with feared diseases like Zika virus, malaria and West Nile virus.

Gaining the upper hand on mosquitoes requires speed. Their life cycle is typically two weeks or less and they need only warm weather and standing water to breed.

Robert Meagher, a chemical engineer at Sandia National Laboratories, has developed a simple technique for simultaneously detecting RNA from West Nile and chikungunya virus in samples from mosquitoes. He is now working to add the ability to screen for Zika virus.

“Our ultimate goal is to develop an autonomous device to passively monitor for mosquito-borne diseases,” Meagher explained. “But first you need an assay that is more robust than the gold standard in a laboratory and that has a very low false-positive rate.”

They explored reverse-transcription loop mediated isothermal amplification (RT-LAMP), an isothermal nucleic acid amplification technique used instead of the more common polymerase chain reaction (PCR) for low-cost or point-of-care diagnostics for infectious diseases. However, in its usual form, RT-LAMP requires too many manipulations or elaborate instrumentation to be suitable for field use or an autonomous device.

RT-LAMP relies on primers, DNA fragment sequences, that bind to a target — the RNA of the virus of interest — and then generate a large amount of DNA. By fluorescently labeling the primer, the new DNA glows as it is produced. If the primer doesn’t find the viral RNA, there is no glow. 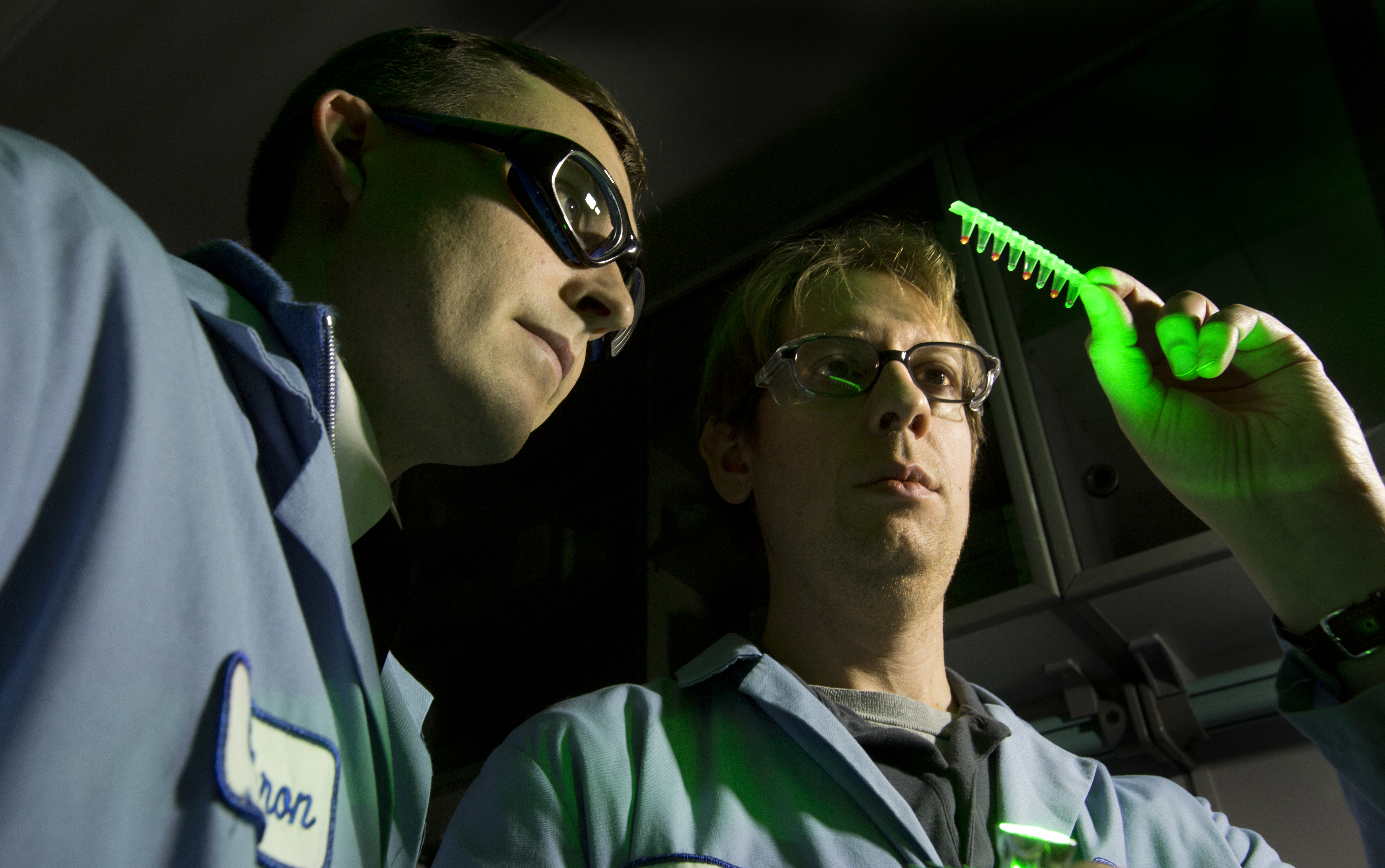 Red means a disease is present to Sandia National Laboratories’ researchers Cameron Ball and Robert Meagher as they test their QUASR, for quenching of unincorporated amplification signal reporters, technique to detect the presence of malaria and viruses like West Nile. Simple enough for field labs and handheld devices, QUASR’s positive signal is 10 times brighter than a negative signal. (Credit: Dino Vournas)

The Sandia researchers added a different DNA fragment sequence called a quench probe that complements a short stretch of primer. As the reaction takes place, the quench probe suppresses any unincorporated primer. This amplifies the positive signal up to 10 times brighter than a negative signal. Because the signal is so bright, QUASR can screen up to three different targets simultaneously, saving time and money.

“We didn’t expect a signal that bright, so we came up with the name QUASR, inspired by quasars, the extremely luminous celestial objects that can be a trillion times brighter than the sun,” Meagher said.

QUASR is simple enough to be used in a field laboratory. The Sandia team is working to incorporate QUASR into a handheld device.

Currently, detecting disease-carrying mosquitoes is a complex and lengthy process. A field worker in a vector control district collects and prepares mosquito samples, which are then sent to a lab for testing using sophisticated PCR techniques.

Using QUASR, either in a portable microfluidic device or simple field laboratory, a user can get a definitive yes or no result in about half an hour. More details like the amount of viral RNA present in the sample would still require laboratory PCR.

“This would allow those in the field to make quick decisions on mosquito abatement that can prevent the spread of disease,” Meagher said.

Discriminating Ebola from Malaria
QUASR also can be adapted to screen people for diseases such as the Zika virus or Ebola virus. This is a constantly changing landscape; a year ago, few people had even heard of Zika virus, which the World Health Organization recently declared an international health emergency.

“Conceptually, it’s not difficult to adapt the assay for a different virus,” said Meagher. “There is some trial and error involved in refinement as you are dealing with a different virus and human sample.”

Meagher recently received a National Institutes of Health (NIH) grant to develop a field-deployable assay for differential diagnosis of malaria and viral febrile illnesses including Ebola. The University of Texas Medical Branch at Galveston is a partner in the grant.

Because malaria and Ebola have similar symptoms — fever, chills, headache, diarrhea and vomiting — health officials worry that patients with malaria are being sent to Ebola quarantine wards.

“A point-of-care device that can quickly discriminate Ebola from malaria in a blood sample would prevent dangerous misdiagnoses,” said Meagher.

Lassa, dengue and other febrile illnesses are also targets for the NIH project.

A Bright Future
Meagher and his team set out to tackle the problem of false positives. “Even a marginal false positive rate would defeat the purpose of an autonomous monitoring device,” he said. “The signal amplification, the amazing brightness of the positive response, was not a goal but certainly a welcome result.

While the human eye can only effectively discriminate three distinct colors, the team is developing imaging technology that could enable simultaneous screening of even more targets.

“I’m very excited about what this technique can do for field workers,” Meagher said. “The ability to make fast decisions about where to direct mosquito abatement resources or how to triage patients will help us stay ahead of mosquito-borne disease outbreaks.”