The bacterial world is rife with unusual talents, among them a knack for producing electricity. In the wild, “electrogenic” bacteria generate current as part of their metabolism, and now researchers at the University of California, Santa Barbara (UCSB), have found a way to confer that ability upon non-electrogenic bacteria. This technique could have applications for sustainable electricity generation and wastewater treatment, the researchers report February 9 in the journal Chem.

“The concept here is that if we just close the lid of the wastewater treatment tank and then give the bacteria an electrode, they can produce electricity while cleaning the water,” says co-first author Zach Rengert, a chemistry graduate student at UCSB. “And the amount of electricity they produce will never power anything very big, but it can offset the cost of cleaning water.”

The bacteria that inspired this study, Shewanella oneidensis MR-1, live in oxygen-free environments and can breathe in metal minerals and electrodes—instead of air—via current-conducting proteins in their cell membranes. Most bacterial species, however, do not have such proteins and therefore naturally do not produce current. Taking inspiration from S. oneidensis‘ membrane-spanning conductive proteins, the team hypothesized that with the right kind of bio-compatible molecular additive, this electrogenesis might be conferred to bacteria that have not evolved to do so.

The researchers, under the guidance of senior author Guillermo Bazan at UCSB, built a molecule called DFSO+, which contains an iron atom at its core. To add the DFSO+ to bacteria, the researchers dissolved a small amount of the rust-colored powder into water and added that solution to bacteria. Within a few minutes, the synthetic molecule found its way into the bacteria’s cell membranes and began conducting current through its iron core, providing a new pathway for the bacteria to shuttle electrons from inside to outside the cell. 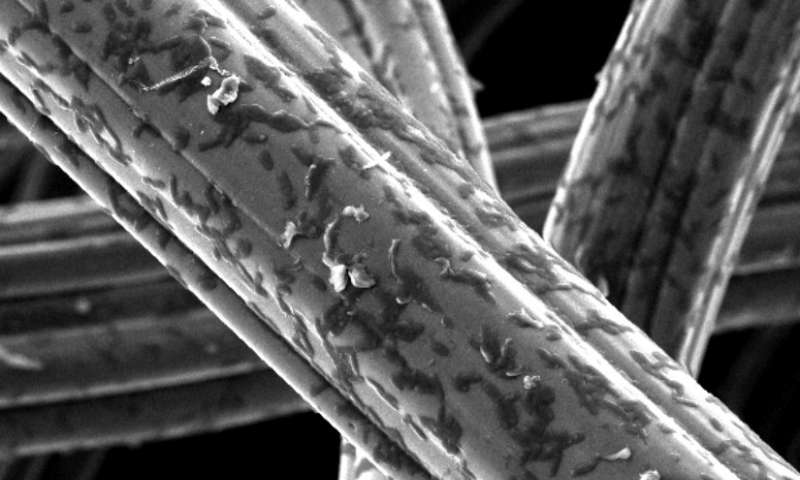 Because the DFSO+ molecule’s shape mirrors the structure of cell membranes, it can quickly slip into the membranes and remain there comfortably for weeks. The approach might need some tweaking before being applied to long-term power generation, the researchers say, but it’s an encouraging initial finding.

This chemical approach to changing bacteria’s capabilities will most likely be cheaper than bacteria genetically engineered to do the same job. “It’s a totally different strategy for microbial electrical energy generation,” says the other co-first author, Nate Kirchhofer (@natekirchhofer), formerly a grad student at UCSB and now a postdoctoral researcher at Asylum Research in Santa Barbara, CA. “Before, we were building these devices, and we were limited to optimizing them by changing reactor materials and architectures or using genetic engineering techniques.”

The researchers call the DFSO+ molecule a “protein prosthetic” because it is a non-protein chemical that does a protein’s job. “It’s sort of analogous to a prosthetic limb, where you’re using a plastic limb that’s not actually made out of someone else’s body,” says Rengert.

Understanding how electrogenic bacteria consume organic fuels and use their metabolic processes to generate electric currents could lead to more efficient biological electricity-generating technology. “It’s useful to have a well-defined, well-understood molecule that we can interrogate,” says Kirchhofer. “We know how it’s interfaced with the bacteria, so it gives us very precise electrochemical control over the bacteria. While this molecule might not be the best one that will ever exist, it’s the first generation of this kind of molecule.”