Ten-year-old Casey Doyle has been on a four-month mission to “beat Boris,” his nickname for the life-threatening tumor found in his throat.

Recently, he did — almost literally.

The fifth grader took a wooden mallet to a 3D printed model of Boris, the nearly golf-ball-sized tumor doctors found in January when Casey was diagnosed with synovial cell sarcoma. Donning a Batman shirt in his room at University of Michigan’s C.S. Mott Children’s Hospital, he pounded the exact replica of the villain until it burst into pieces and oozed goo.

A couple of weeks later, Casey was able to bid Boris another good-bye, this time sharing the experience with a crowd of cheering classmates at George Long Elementary who have been supporting their friend with “beat Boris” bracelets.

“We talked about him so much that I just named him Boris. Boris is evil,” Casey says. “He’s caused a lot of trouble for me and my family. Because of him I’ve spent a lot of time here at the hospital. I wanted to destroy him … It felt great.”

‘The Biggest Smile We’ve Seen in Months’
A team of surgeons at C.S. Mott Children’s Hospital removed the tumor in March, but at Casey’s request, doctors sent him home with Boris – well his twin, at least.

Using Casey’s MRI, Mott teams created a 3D model on the computer, which visually separated the tumor from other structures in Casey’s neck. They then 3D printed an identical replica made out of polylactic acid, painted the model with red and purple “veins” and filled it with tapioca pudding and Rice Krispies, so that even the slimy insides would mimic the real thing.

“That’s the biggest smile we’ve seen in months,” his mom Marcia says after what was dubbed the “Boris bash.” “Seeing the tumor physically also gives him a serious sense of what he’s fighting, and why he needs to go through this treatment.”

It all started when Mott PICU nurse David Sadler learned about Casey’s dream to “bash Boris.” Sadler began exploring options, helping get the story to Kyle K. VanKoevering, M.D., and Glenn Green, M.D., a head and neck surgeon who has led groundbreaking advancementswith 3D printing in medicine at Mott. 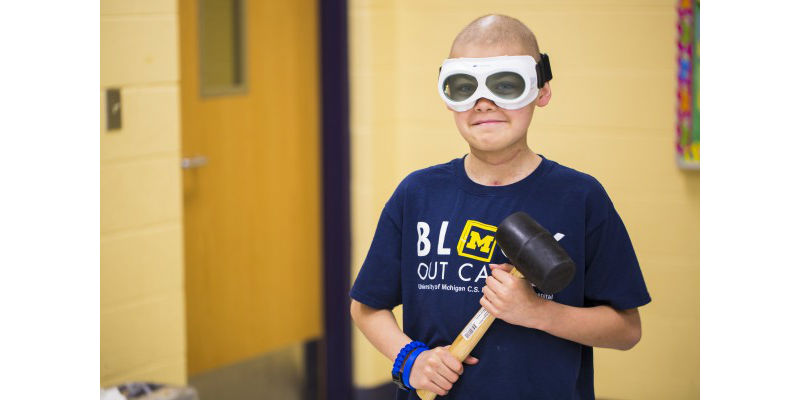 VanKoevering and Green agreed to create several Boris replicas for the family. Green says that 3D printed tumors have been made before, but “this is the first time we made one to be smashed.”

Creating realistic models like this helps educate patients by giving them a better grasp of what the tumor looks like inside their bodies, the doctors say.

“When we heard about Casey and his interest in smashing this tumor he had named Boris as a symbolic representation of his fight to conquer cancer, we wanted to help,” VanKoevering says.

“It took us a little time and effort to build these models, but seeing the smile on Casey’s face when he got to pulverize that thing to smithereens made it all worth it. We believe 3D printed models like this have the potential to be therapeutic for patients.”

Casey’s Fight Against Rare Cancer
David Zopf, M.D., Mott pediatric head and neck surgeon, initially evaluated and diagnosed Casey with the rare tumor, then enlisted the expertise of U-M head and neck surgeons Keith Casper M.D., and Matthew Spector, M.D. The nearly 10-hour surgery involved carefully separating the tumor from Casey’s voice box. Skin, fat and muscle tissue from Casey’s own back was then used to rebuild his throat. He was speaking and eating within three weeks.

Casey was also treated by pediatric oncologist Rama Jasty Rao, M.D. and a team of specialists from the Michigan Solid Tumor Oncology Program (MSTOP) at Mott, which is one of the nation’s largest multidisciplinary programs caring for children with solid tumors.

“We have never experienced such wonderful treatment from anyone as we have at Mott,” Casey’s dad Mark says. “We feel so fortunate to have Mott in our backyard, and I can truly see why so many people travel for hundreds and or thousands of miles to seek treatment here.”

Using Casey’s MRI, doctors at U-M’s C.S. Mott Children’s Hospital teams created a 3-D model of Casey’s tumor “Boris.” The replica was made out of polylactic acid, painted with red and purple “veins” and filled with tapioca pudding and Rice Krispies so that even the insides would mimic the real thing. (Credit: University of Michigan Health System)

Casey says the name Boris just came to him, and he didn’t know the Russian meaning, which is “fight.” For Casey, getting rid of Boris is just one milestone in his own fight against cancer with a few more rounds of chemotherapy and radiation still ahead.

“This has certainly been very hard on him. We are for anything that helps him relieve some of the stress, anger and frustration,” Mark Doyle says. “Boris has kind of become a cult phenomenon at Casey’s school. His friends have been making posters and sending messages that say ‘beat Boris.’

“We just couldn’t believe the doctors could actually create something like this. They said it may help as a form of therapy for others in the future,” he adds. “We are proud that Casey has won this battle against Boris, but now we are fighting to make sure Boris doesn’t come back.”

Inspired by Casey’s experience, a generous donor has provided funds to enable Mott doctors to give 150 other kids the same chance to smash a 3D replica of their own tumor. If you know a child with cancer who would like a 3D printed replica of his or her own tumor, visit www.mottchildren.org/3dtumorreplica.