The set-up for the SMU 3-D light pad includes this ultraviolet projector as well as a visible projector. The two project patterns of light into a chamber of photoactivatable dye. Wherever the UV light intersects with the green light it generates a 3-dimensional image inside the chamber. (Credit: SMU)

A scientist’s dream of 3-D projections like those he saw years ago in a Star Wars movie has led to new technology for making animated 3-D table-top objects by structuring light.

The economical method for shaping light into an infinite number of volumetric objects would be useful in a variety of fields, from biomedical imaging, education and engineering, to TV, movies, video games and more.

“Our idea was to use chemistry and special photoswitch molecules to make a 3-D display that delivers a 360-degree view,” Lippert said. “It’s not a hologram, it’s really three-dimensionally structured light.”

Key to the technology is a molecule that switches between non-fluorescent and fluorescent in reaction to the presence or absence of ultraviolet light.

The new technology is not a hologram, and differs from 3-D movies or 3-D computer design. Those are flat displays that use binocular disparity or linear perspective to make objects appear three-dimensional when in fact they only have height and width and lack a true volume profile.

“When you see a 3-D movie, for example, it’s tricking your brain to see 3-D by presenting two different images to each eye,” Lippert said. “Our display is not tricking your brain—we’ve used chemistry to structure light in three actual dimensions, so no tricks, just a real three-dimensional light structure. We call it a 3-D digital light photoactivatable dye display, or 3-D Light Pad for short, and it’s much more like what we see in real life.”

At the heart of the SMU 3-D Light Pad technology is a “photoswitch” molecule, which can switch from colorless to fluorescent when shined with a beam of ultraviolet light.

The researchers discovered a chemical innovation for tuning the photoswitch molecule’s rate of thermal fading—its on-off switch—by adding to it the chemical amine base triethylamine.

Now the sky is the limit for the new SMU 3-D Light Pad technology, given the many possible uses, said Lippert, an expert in fluorescence and chemiluminescence—using chemistry to explore the interaction between light and matter.

For example, conference calls could feel more like face-to-face meetings with volumetric 3-D images projected onto chairs. Construction and manufacturing projects could benefit from rendering them first in 3-D to observe and discuss real-time spatial information. For the military, uses could include tactical 3-D replications of battlefields on land, in the air, under water or even in space.

“With real 3-D results of an MRI, radiologists could more readily recognize abnormalities such as cancer,” Lippert said. “I think it would have a significant impact on human health because an actual 3-D image can deliver more information.”

Lippert and his team report on the new technology and the discovery that made it possible in the article “A volumetric three-dimensional digital light photoactivatable dye display,” published in the journal Nature Communications.

Co-authors are Shreya K. Patel, lead author, and Jian Cao, both students in the SMU Department of Chemistry.

Genesis of an idea—cinematic inspiration

The idea to shape light into volumetric animated 3-D objects came from Lippert’s childhood fascination with the movie “Star Wars.” Specifically he was inspired when R2-D2 projects a hologram of Princess Leia. Lippert’s interest continued with the holodeck in “Star Trek: The Next Generation.”

“As a kid I kept trying to think of a way to invent this,” Lippert said. “Then once I got a background in chemistry molecules that interact with light, and an understanding of photoswitches, it finally dawned on me that I could take two beams of light and use chemistry to manipulate the emission of light.”

Key to the new technology was discovering how to turn the chemical photoswitch off and on instantly, and generating light emissions from the intersection of two different light beams in a solution of the photoactivatable dye, he said.

SMU graduate student in chemistry Jian Cao hypothesized the activated photoswitch would turn off quickly by adding the base. He was right.

“The chemical innovation was our discovery that by adding one drop of triethylamine, we could tune the rate of thermal fading so that it instantly goes from a pink solution to a clear solution,” Lippert said. “Without a base, the activation with UV light takes minutes to hours to fade back and turn off, which is a problem if you’re trying to make an image. We wanted the rate of reaction with UV light to be very fast, making it switch on. We also wanted the off-rate to be very fast so the image doesn’t bleed.”

In choosing among various photoswitch dyes, the researchers settled on N-phenyl spirolactam rhodamines. That particular class of rhodamine dyes was first described in the late 1970s and made use of by Stanford University’s Nobel prize-winning W.E. Moerner.

The dye absorbs light within the visible region, making it appropriate to fluoresce light. Shining it with UV radiation, specifically, triggers a photochemical reaction and forces it to open up and become fluorescent.

Turning off the UV light beam shuts down fluorescence, diminishes light scattering, and makes the reaction reversible—ideal for creating an animated 3-D image that turns on and off.

“Adding triethylamine to switch it off and on quickly was a key chemical discovery that we made,” Lippert said.

To produce a viewable image they still needed a setup to structure the light.

Structuring light in a table-top display

Inside they deployed a liquid solvent, dichloromethane, as the matrix in which to dissolve the N-phenyl spirolactam rhodamine, the solid, white crystalline photoswitch dye.

Next they projected patterns into the chamber to structure light in two dimensions. They used an off-the-shelf Digital Light Processing (DLP) projector purchased at Best Buy for beaming visible light.

The DLP projector, which reflects visible light via an array of microscopically tiny mirrors on a semiconductor chip, projected a beam of green light in the shape of a square. For UV light, the researchers shined a series of UV light bars from a specially made 385-nanometer Light-Emitting Diode projector from the opposite side.

Where the light intersected and mixed in the chamber, there was displayed a pattern of two-dimensional squares stacked across the chamber. Optimized filter sets eliminated blue background light and allowed only red light to pass.

From there, one of the first animated 3-D images the researchers created was the SMU mascot, Peruna, a racing mustang. 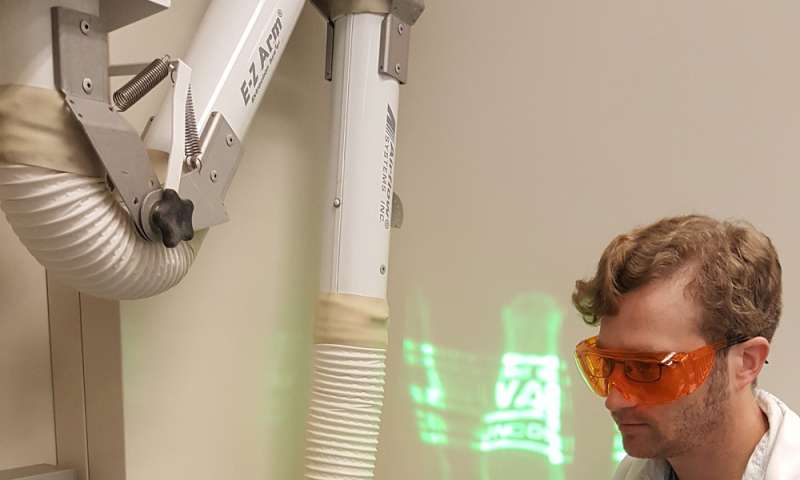 SMU chemist Dr. Alex Lippert and his lab developed the SMU 3-D light pad (shown here). It includes an ultraviolet projector and a visible projector, which project patterns of light into a chamber of photoactivatable dye. Wherever the UV light intersects with the green light it generates a 3-dimensional image inside the chamber. (Credit: SMU)

“For Peruna—real-time 3-D animation—SMU undergraduate student Shreya Patel found a way to beam a UV light bar and keep it steady, then project with the green light a movie of the mustang running,” Lippert said.

Today’s 3-D images date to the Italian Renaissance and its leading architect and engineer.

“Brunelleschi during his work on the Baptistery of St. John was the first to use the mathematical representation of linear perspective that we now call 3-D. This is how artists used visual tricks to make a 2-D picture look 3-D,” Lippert said. “Parallel lines converge at a vanishing point and give a strong sense of 3-D. It’s a useful trick but it’s striking we’re still using a 500-year-old technique to display 3-D information.”

The SMU 3-D Light Pad technology, patented in 2016, has a number of advantages over contemporary attempts by others to create a volumetric display but that haven’t emerged as commercially viable.

Some of those have been bulky or difficult to align, while others use expensive rare earth metals, or rely on high-powered lasers that are both expensive and somewhat dangerous.

The SMU 3-D Light Pad uses lower light powers, which are not only cheaper but safer. The matrix for the display is also economical, and there are no moving parts to fabricate, maintain or break down.

Lippert and his team fabricated the SMU 3-D Light Pad for under $5,000 through a grant from the SMU University Research Council.

“For a really modest investment we’ve done something that can compete with more expensive $100,000 systems,” Lippert said. “We think we can optimize this and get it down to a couple thousand dollars or even lower.”

The resolution quality of a 2-D digital photograph is stated in pixels. The more pixels, the sharper and higher-quality the image. Similarly, 3-D objects are measured in voxels—a pixel but with volume. The current 3-D Light Pad can generate more than 183,000 voxels, and simply scaling the volume size should increase the number of voxels into the millions—equal to the number of mirrors in the DLP micromirror arrays.

For their display, the SMU researchers wanted the highest resolution possible, measured in terms of the minimum spacing between any two of the bars. They achieved 200 microns, which compares favorably to 100 microns for a standard TV display or 200 microns for a projector.

The goal now is to move away from a liquid vat of solvent for the display to a solid cube table display. Optical polymer, for example, would weigh about the same as a TV set. Lippert also toys with the idea of an aerosol display.

The researchers hope to expand from a monochrome red image to true color, based on mixing red, green and blue light. They are working to optimize the optics, graphics engine, lenses, projector technology and photoswitch molecules.

“I think it’s a very fascinating area. Everything we see—all the color we see—arises from the interaction of light with matter,” Lippert said. “The molecules in an object are absorbing a wavelength of light and we see all the rest that’s reflected. So when we see blue, it’s because the object is absorbing all the red light. What’s more, it is actually photoswitch molecules in our eyes that start the process of translating different wavelengths of light into the conscious experience of color. That’s the fundamental chemistry and it builds our entire visual world. Being immersed in chemistry every day—that’s the filter I’m seeing everything through.”

The SMU discovery and new technology, Lippert said, speak to the power of encouraging young children.

“They’re not going to solve all the world’s problems when they’re seven years old,” he said. “But ideas get seeded and if they get nurtured as children grow up they can achieve things we never thought possible.”