Adero Knott thinks prosthetic limbs are “too pricey, not functional, and not aesthetically pleasing,” according to a recent article in ChicagoInno. She’s launching AK Prosthetics with the goal of creating a “prosthetic limb vending machine.”

A customer would enter a booth, get scanned, select features — one could even choose functional customizations such as a special rubber sole for construction work — and voilà! The 3D-printed limb arrives the next day. That’s the idea, anyway; the company is “still in the idea phase.”

Knott and others operate on what might be termed the “fast and cheap” trend in prosthetics development. A prime example: The Low Cost Prosthesis Project, which “aims at developing a lower leg prosthetic with production costs below $50.” 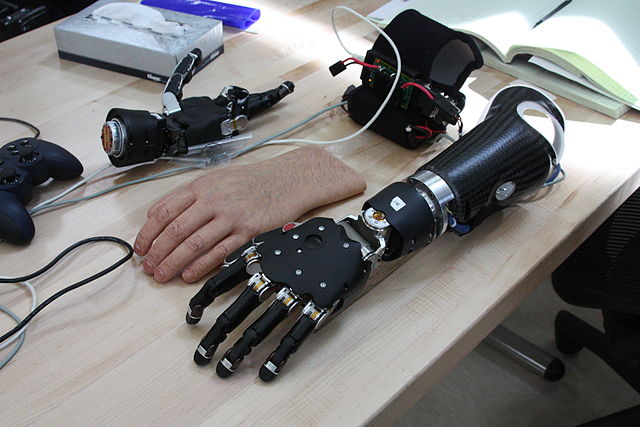 Adero Knott’s nascent startup isn’t all about cheap and fast; it’s also about functionality and aesthetics. However, next-day prostheses are unlikely, at least in the foreseeable future, to incorporate the latest in myoelectric research, robotics, and other sci-fi-turned-reality technology. Which brings us to the other trend.

As a counterpoint to the “fast and cheap” trend, the hi-tech world of prosthetics R&D aims to not only restore complete functionality; it would like to eventually augment an amputee’s capacity beyond the merely human. Wireless networks, tiny computers, neural interfaces, and other such wonders combine in biomedical research labs.

For example, researchers at Simon Fraser University built a robotic hand that tracks muscle movements and becomes progressively more responsive. In other words, it learns and adapts based on complex modeling and algorithmic software.

PLENTY OF ROOM FOR BOTH

Obviously, prostheses that feature machine learning, brain control, and other such wizardry won’t be cheap. Probably not fast, either. And a $50 leg isn’t likely to have a lot of bells and whistles.

However, both the low-cost and the hi-tech trends are whittling away at different ends of the same problem: amputees want the best quality of life at the lowest price (not unlike the rest of us). And the two build off one another. Advances in rapid turnaround and cost-efficiency can help bring down the prices of high-end prosthetic devices, while technological advances can influence the design and usability of low-end limbs.

DIFFERENT MARKETS, HIGH DEMAND FOR BOTH

With 40 million amputees in the so-called developing world, the market for low-cost prosthetics is vast. An estimated 95% of these amputees have no prosthetic limb whatsoever. In such a case, any prosthesis will be better than no prosthesis. Thanks to advances in prosthetics, however, even the low-cost limb of today is better than that of yesteryear. And, for the company able to produce an arm or leg at a $50 retail pricepoint, significant penetration of even the poorest markets should be feasible. Mozambique, for example, has an average per-capita GDP of $1,208.00 USD. The limb would cost about 4% of this number. For perspective, the average U.S. citizen earns about $56,000.00 annually; $2,240.00 (4% of U.S. per capita GDP) might be difficult for a median-income household to front, but not impossible.

On the hi-tech side, a prosthetic will need to demonstrate sufficient enhancement of function to justify its cost. In wealthy nations, those firms able to outflank their competition in functionality can expect to expand their market share proportionally.