Stroke and spinal cord injury patients often require gait rehabilitation to regain the ability to walk or to help strengthen their muscles. Wearable “robot-assisted training” is quickly emerging as a method that helps improve this rehab process.

In a major advance, researchers from Beihang University in China and Aalborg University in Denmark have designed a lower-limb robot exoskeleton—a wearable robot—that features natural knee movement to greatly improve patients’ comfort and willingness to wear it for gait rehab. 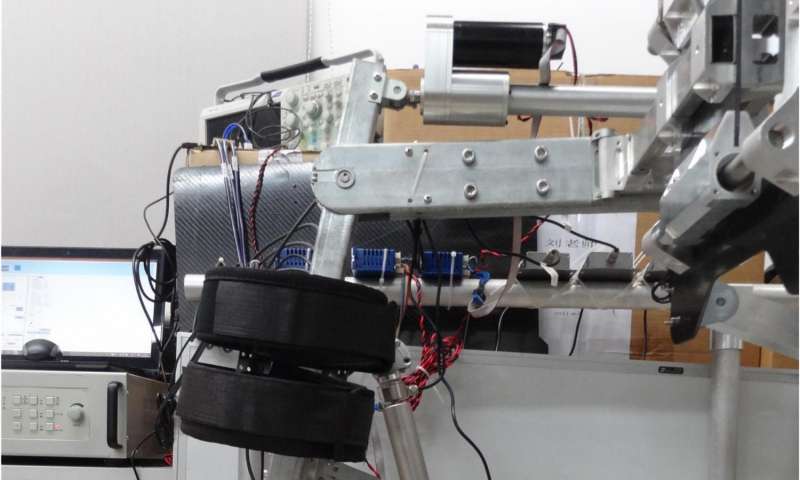 As the team reports this week in Review of Scientific Instruments, from AIP Publishing, their robotic exoskeleton is intended to help stroke patients strengthen their physical fitness, aid the rehabilitation training of paralyzed patients, or to assist those who need help performing daily activities.

Exoskeleton robots aren’t new—they’ve been studied extensively and many designs have focused on lower limbs. This team’s approach focused instead on the knee joint, one of the most complex mechanical systems within the human body and a critical player during gait.

The knee joint’s motion is actuated by several skeletal muscles along its articular surfaces, and its center of rotation moves. The researchers wondered if a parallel mechanism similar to skeletal muscles would be useful for designing a bionic knee joint.

“Our new design features a parallel knee joint to improve the bio-imitability and adaptability of the exoskeleton,” explained Weihai Chen, a professor at Beihang University’s School of Automation Science and Electrical Engineering, in Beijing, China.

Specifically, the team’s exoskeleton taps a hybrid serial-parallel kinematic structure consisting of a 1-degree of freedom (DOF) hip joint module and a 2-DOF knee joint module in the sagittal plane. And a planar 2-DOF parallel mechanism helps to fully accommodate the motion of the human knee—enabling rotation and relative sliding.

Movement transparency is critical when wearing a robot for gait rehab. In other words: When wearing the exoskeleton, its movement should be synchronized and consistent with a patient’s natural movement.

“If not, it exerts extra forces on the human joint,” Chen said. “And this extra force causes patient discomfort and unnatural movements.”

So the team focused on bionic mechanical design to achieve this goal.

“To improve the transparency of the robot, we studied the structure of the human body, then built our model based on a biometric design of the lower limb exoskeleton,” Chen continued.

This design is the first known use of a parallel mechanism at the knee joint to imitate skeletal muscles. “Our design goes beyond solving the transparency problem in the knee joint—and it’s a simple structure,” Chen added. “Unlike most previous exoskeletons, which simplified the knee joint as a pin joint, ours provides 2 DOF to make the exoskeleton’s movement consistent with a patient’s natural movement.”

As far as its applications, the exoskeleton’s main role will be to help stroke or spinal cord injury patients with their rehab.

“We plan to streamline it to be wearable and to provide a comfortable training experience,” Chen said. “Our team is also developing virtual reality games to help make the training process more enjoyable.”

The team is exploring controlling their exoskeleton via patients’ electromyography (EMG) signal—which records electrical activity produced by skeletal muscles—so that they’ll be more actively involved in their training.

“We can obtain the movement intention from a patient’s electroencephalogram (EEG)—brain signals—and use it to directly control the exoskeleton,” Chen explained. “These improvements should enable easy control and make the exoskeleton act as part of the human body.”

The next step for the team is to collaborate with hospitals, because testing the robot out with patients can provide critical feedback from patients and doctors.

“We’d also like to commercialize it in the near future, so we’ll be working to make the robot’s appearance fancier and enhancing the user interface to be more user friendly,” Chen noted.