Researchers from the University of Illinois at Urbana-Champaign have developed a highly sensitive biosensor based on a differential immuno-capture technology that can detect sub-populations of white blood cells. As part of a small, disposable biochip, the microfluidic biosensor can count CD4+/CD8+ T cells quickly and accurately for AIDS diagnosis in the field. This is a follow-up of the work earlier published by the group in Science Translational Medicine.

“There are 34 million people infected with HIV/AIDS worldwide, many in places that lack testing facilities,” explained Rashid Bashir, an Abel Bliss Professor of Engineering and head of the Department of Bioengineering at Illinois. 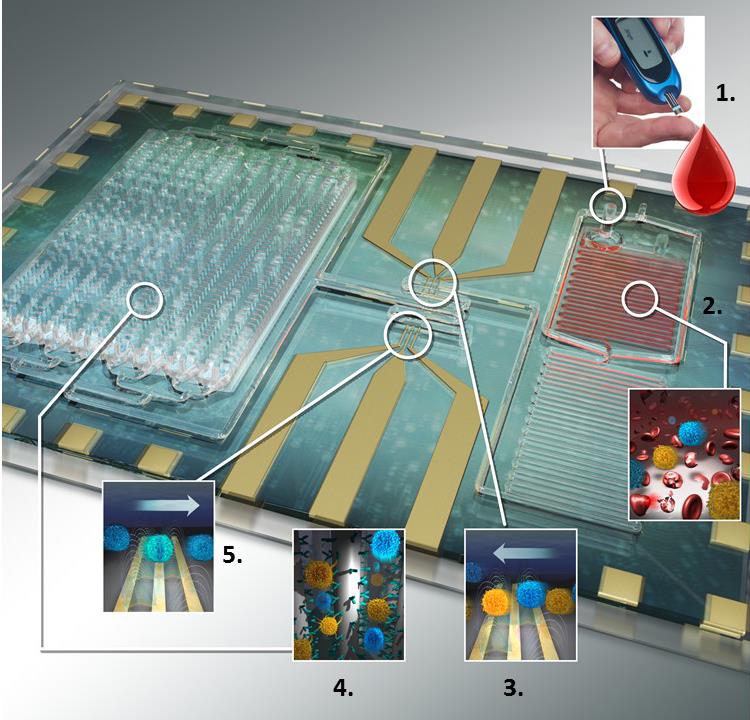 Differential immuno-capture biochip schematic: 1. Ten microliters of blood is infused into the biochip. 2. Erythrocytes were lysed and the leukocytes were preserved using as custom-made lysing and quenching buffers get mixed with blood. 3. The leukocytes pass over co-planar platinum microfabricated electrodes and are counted. 4. Specific cell antibodies e.g. monoclonal CD4 T cell antibody is initially adsorbed on the capture chamber. CD4 T cells get captured as they interact with the antibodies in the chamber. 5. Remaining leukocytes gets counted again with second counter. The difference in the respective cell counts give the concentration of the cells captured.

“An important diagnostic biomarker for HIV/AIDS is the absolute count of the CD4+ and CD8+ T lymphocytes in the whole blood. The current diagnostic tool—a flow cytometer—is expensive, requires large blood volume, and a trained technician to operate,” Bashir said. “We have developed a microfluidic biosensor based on a differential immuno-capture electrical cell counting technology to enumerate specific cells in 20 minutes using 10 microliters of blood.” (There are about 50 microliters in a drop of blood).

Human blood is composed of 45 percent of cells with 5 million erythrocytes as compared to only 7000 leukocytes in one microliter of blood. Specific leukocytes like CD4 T cells are of the order of 50-1000 cells per microliter. Electrical cell counting can differentiate cells based on size and membrane properties depending on the frequency of the interrogation signal. However, differentiating cells of same morphology is a challenge.

“In response to this challenge, we had developed a technique to selectively deplete target leukocytes,” Hassan added. “And our biochip takes whole blood as input, eliminating the need of off-chip sample preparation and effectively reducing the assay time as well.”

In addition to the microfluidic “capture chamber,” the new chip incorporates separate ports for lysing reagents and quenching buffers that preserve the leukocytes for counting by the microfabricated electrodes. Specific leukocytes like CD4 T cells get captured as they interact with the antibodies in the capture chamber; a second counter recounts the remaining leukocytes. The difference in the respective cell counts give the concentration of the cells captured.

In clinical trials, the differential immuno-capture biochip achieved more than 90 per cent correlation with a flow cytometer for both CD4 T cells for CD8 T cell counts using HIV infected blood samples. The biochip can also be adapted to enumerate other specific cell types such as somatic cells or cells from tissue or liquid biopsies.

The novel biosensor has the potential to be an automated portable blood cell counter for point-of-care applications in developed and resource-limited regions worldwide. Bashir’s group is working on miniaturizing the setup to make the technology handheld, as well as designing a cartridge that can be mass-produced.