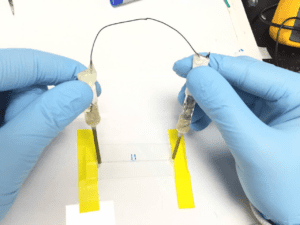 [Image from the University of Maryland]

University of Maryland engineers have created a biocompatible battery that uses the same ion-based electrical energy that is present in all living things – including humans.

Traditional batteries produce power by using a flow of moving electrons. Those batteries move positive ions from one end of the battery to the other. The University of Maryland battery does the opposite by moving electrons around the device to deliver a flow of ions. The engineers claim that this is the first time that an ionic-current-generating battery has been made.

“My intention is for ionic systems to interface with human systems,” Liangbing Hu, the head of the group that developed that battery, said in a press release. “So I came up with the reverse design of a battery. In a typical battery, electrons flow through wires to interface electronics and ions flow through the battery separator. In our reverse design, a tradition battery is electronically shorted (that means electrons are flowing through the metal wires). Then ions have to flow through the outside ionic cables. In this case, the ions in the ionic cable – here, grass fibers – can interface with living systems.”

Living cells use ionic currents that flow at a low voltage. Electronic-to-ionic patches would create a current that is too high to run a brain or a muscle. The engineers suggest that the patches could be eliminated by using ionic current batteries that could be run at any voltage.

“The battery could be used to develop medical devices for the disabled, or for more efficient drug and gene delivery tools in both research and clinical settings, as a way to more precisely treat cancers and other medical diseases,” said Jianhua Zhang, a staff scientist at the National Institute of Diabetes and Digestive and Kidney Diseases. “Potential applications might include the development of the next generation of devices to micro-manipulate neuronal activities and interactions that can prevent and/or treat such medical problems as Alzheimer’s disease and depression.”

The UMD battery also uses grass to store its energy. The engineers soaked blades of Kentucky bluegrass in a lithium salt solution. The channels that move nutrients through the grass blades held the solution. They tested the battery by putting the blades of grass inside two glass tubes. The grass was connected by a thin metal wire at the top where the electrons could flow through to move through the battery as stored energy is discharged slowly. The other end of the glass tubes has a metal tip that allows the ionic currents to flow through.

“The microchannels in the grass can hold the salt solution, making them a stable ionic conductor,” Chengwei Wang, first author of the paper and a graduate student in the Materials Science and Engineering Department at the University of Maryland in College Park, said.

The researchers plan to further develop the battery to diversify the types of ionic currents that electron batteries can produce.

The research was published in the journal Nature Communications and was funded by Nanostructures for Electrical Energy Storage, a DOE Energy Frontier Research Center and Intramural Research Program of the NIDDK.