The quest for a synthetic heart valve that faithfully mimics the original is a step closer to its goal with the Rice University find that a natural polymer called hyaluronan, one of the chief components of skin and connective tissue, can serve as a versatile template for growing spongiosa, the middle tissue layer in the valve’s leaflets.

The tissues in heart valves, which typically work for decades without pause, are some of the strongest and most durable in nature and the options to repair or replace them are limited.

Rice bioengineer Jane Grande-Allen and her colleagues are working toward the construction of replacement heart valves made of materials that match those produced by nature as precisely as possible. “It’s worth pursuing more gel-based scaffolds in tissue engineering because these can be easily tuned to match the stiffness of natural tissue and researchers can encapsulate cells during cross-linking to study them in a 3D environment,” she said. 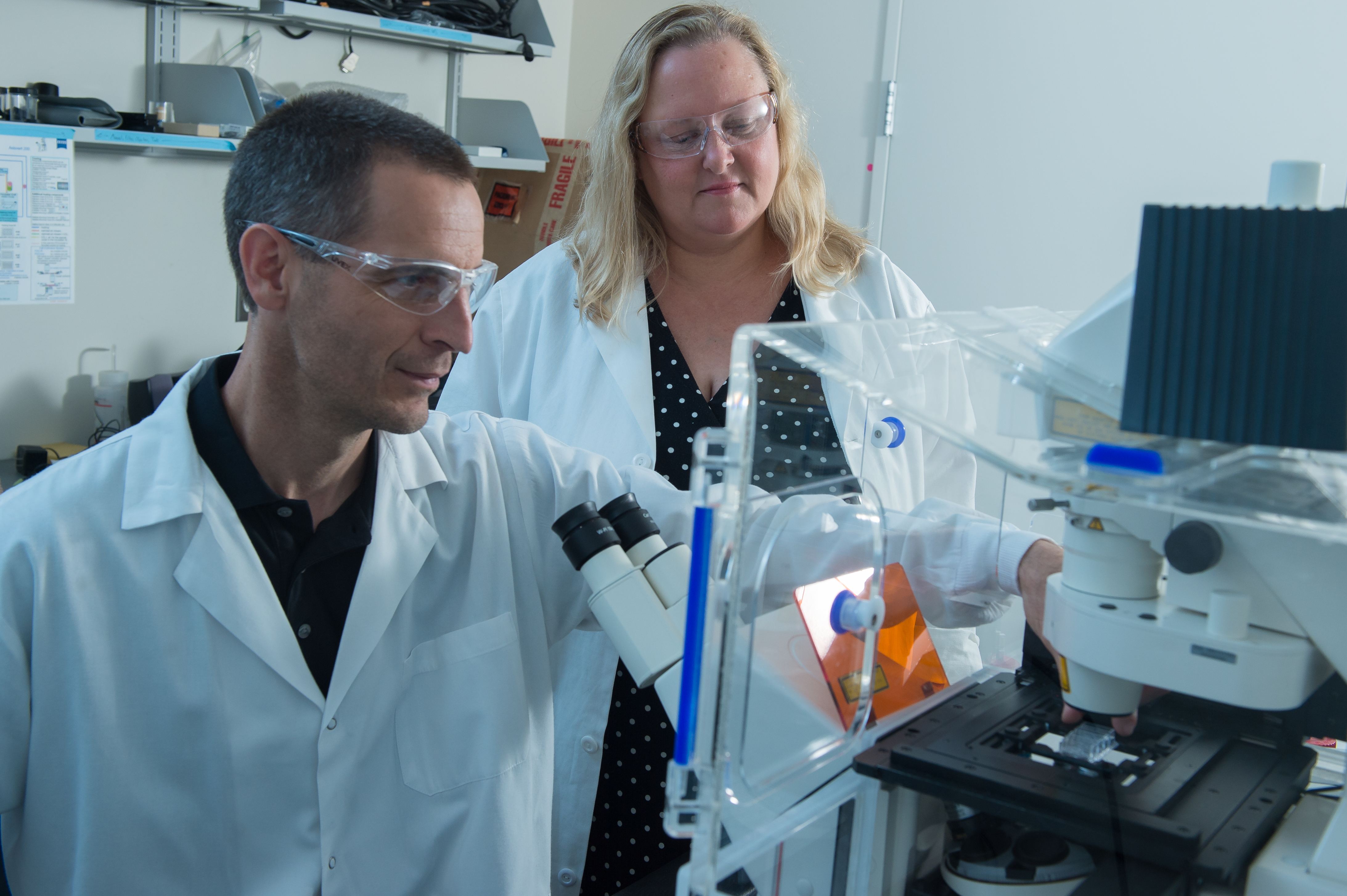 Rice University graduate student Dan Puperi and bioengineer Jane Grande-Allen test a sample in her lab at Rice’s BioScience Research Collaborative. They led a study to evaluate the use of the natural polymer hyaluronan as a template for growing spongiosa tissue for replacement heart valves. (Credit: Jeff Fitlow/Rice University)

In a three-year study, the researchers took a close look at hydrogels based on hyaluronan, a long glycosaminoglycan molecule that attracts water and serves as both a shock absorber and lubricant in heart valves. Their work appears in the American Chemical Society journal Biomacromolecules.

Hyaluronan makes up 60 percent of a valve’s carbohydrate-rich spongiosa layer. The soft and flexible spongiosa binds the tough fibrosa and ventricularis leaflets on either side of each of the heart’s four valves. Spongiosa has to combine remarkable strength and flexibility to withstand the pushing and pulling of the surrounding heart tissue for a lifetime.

The study led by Grande-Allen and graduate student Dan Puperi determined that naturally produced hyaluronan performed as well as a synthetic hydrogel, polyethylene glycol diacrylate (PEGDA), as a template for growing new spongiosa tissue. They reported the stiffness of either hydrogel and the presence of a peptide known as RGDS could be even more influential in controlling a cell culture’s behavior.

The scaffolds are meant to degrade as the cells grow into natural tissue, and the researchers said using either type of scaffold may be better than mesh-based polymers employed in the most common tissue-engineered heart valves because the meshes have been widely reported to shrink over time after implantation in the body.

In the lab, the Rice researchers built bioscaffold matrices of natural hyaluronan or synthetic PEGDA. Each type of scaffold was tuned to match the mechanical properties of spongiosa, and the two types were used to compare the behaviors of growing colonies of valve interstitial cells, which help all three valve layers maintain their structural integrity. 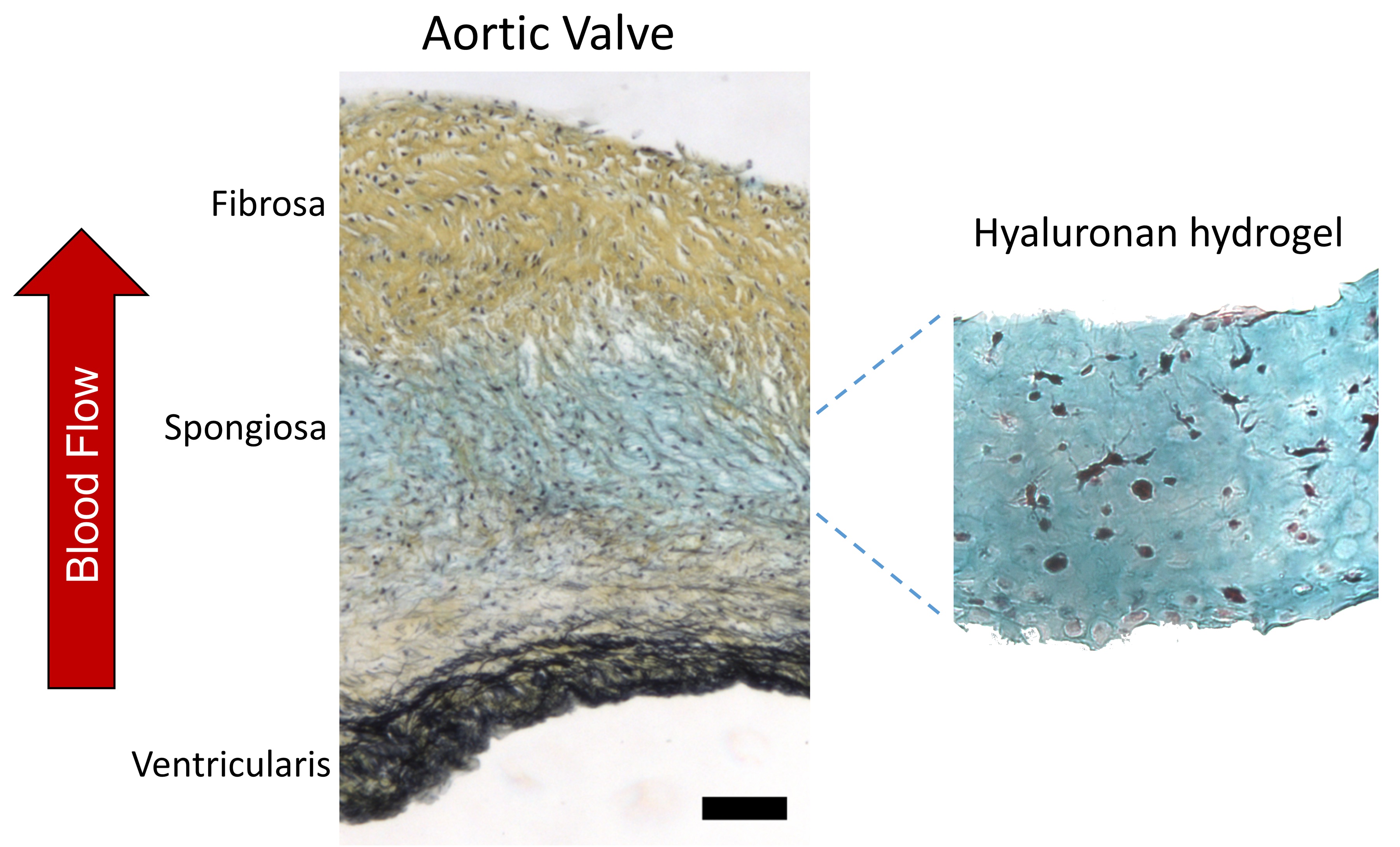 Rice University researchers are studying the characteristics of hydrogels that may be used as a tunable bioscaffold for new spongiosa, the middle tissue layer in the leaflets of heart valves. The ultimate goal is to develop synthetic replacement heart valves that mimic natural ones. (Credit: Illustration by Dan Puperi/Rice University)

“A lot of people are interested in hyaluronan because it’s known to be a bioactive material found naturally in heart valves,” Grande-Allen said. “We were surprised that after the process of making it cross-linkable, the hyaluronan turned into a generic scaffold material that wasn’t as bioactive anymore.”

The scaffolds need to maintain bioactivity to nourish the cells and direct their growth, she said.

“It’s handy to have another candidate scaffold material, but our study showed that if you really want to mimic the carbohydrate component of this spongiosa region, you may have to add that in, as opposed to just using a cross-linked carbohydrate as the scaffold itself,” Grande-Allen said. Hyaluronan scaffolds may be effective natural platforms to test how cell cultures react to various carbohydrate additives, she said.

Though both the natural and synthetic scaffolds turned out to be biologically inert, the researchers saw differences in how they broke down. “The PEGDA was precisely degradable with collagenases and not at all susceptible to hyaluronidase, and vice versa,” Puperi said. “The cells can use different enzymes to degrade different materials, even though they have the same stiffness. That gives us control over how to degrade the scaffold.”

Though their mechanical properties were nearly identical, Puperi said, the hyaluronan hydrogel displayed more energy dissipation than PEGDA. “We also saw some up-regulation of hyaluronan synthase enzyme (which produces natural hyaluronan), and that may or may not be good,” he said.

That could offer new insight into the roots of heart-valve disease, Grande-Allen explained. “In many heart-valve diseases, there is increased expression of hyaluronan synthase, so the cells make more hyaluronan,” she said. “If they keep making more, it’s going to accumulate, so the cells will often simultaneously turn on enzymes to break it down as well. That action ultimately causes problems because these fragments don’t just go away. The small hyaluronan fragments are very bioactive and can make cells behave in problematic ways.”

While they studied hyaluronan, the team came across a protein expressed by valve cells that may play a role in its binding and degradation. The protein, known as KIAA1199, has been previously studied in relation to hearing loss, cancer and skin repair, but its presence was unexpected in valve tissues and will be the subject of future study, Puperi said.

“It’s a big symphony of molecules that all work together, and it’s hard to analyze it if you don’t know all the players,” Grande-Allen said. “So when a new player shows up, you wonder, How is this involved?

“Showing that cells have more tools for creating hyaluronan gives us a little more power to understand what’s happening and helps us paint a better picture of how cells manage this big hyaluronan molecule in normal and diseased valves as well as tissue-engineered valves,” she said.