A Canadian athlete’s dream to one day “move” his fingers again after losing an arm in a workplace accident is now within grasp, thanks to a robotic arm prosthesis being developed at Simon Fraser University.

SFU researchers are working with paralympic skier Danny Letain to design a new control system for one of the world’s most advanced bionic hands, promising a more intuitive experience for upper limb amputees.

Letain, a former locomotive engineer, lost his left arm below the elbow 35 years ago. He has since used a body-powered prosthesis with a pincer-like split hook, which uses a series of straps that mechanically maneuver the artificial limb.

It’s a fatiguing process. “The hook is durable and quick to respond, but controlling it with straps is not natural,” he says.

With the SFU team’s new control system, Letain already has a variety of different grip patterns that he says work “well beyond” what he could achieve with prosthetic devices.

Letain adds: “With this new system, it feels like I’m opening and closing my hand. The most exciting moment for me was feeling my left index finger and the little finger for the first time since my accident. With the hook you don’t use those muscles at all. This system puts my mind to work in a whole new way.”

The technology was developed in engineering science professor Carlo Menon’s biomedical engineering lab initially to rehabilitate stroke patients. He immediately saw the potential for wider applications, including for amputees.

Menon says there is a high rejection rate with existing robotic prostheses because they are not intuitive. “The problem is in the control systems, which have not significantly advanced in 50 years,” he says. “As a result, the robotic prostheses are not very useful for performing everyday tasks, and only about a quarter of amputees use them.”

The robotic arm being used by the team to apply its technology is the Bebionic3, on loan from Steeper Prosthetics, a company in Leeds, England that produces bionic hands. The SFU team began working with Letain and staff at Vancouver’s Barber Prosthetics in June 2015.

The new system consists of an armband of pressure sensors embedded in the prosthetic socket. These track movements in Letain’s remaining muscles as he performs intuitive actions, such as grasping a bottle. Computer algorithms then map the sensor data to decode his intentions and move the prosthesis.

“The more data you give it, the more it will learn,” says SFU engineering science alumnus Lukas-Karim Merhi, who is leading the interdisciplinary team, calling themselves M.A.S.S. Impact (Mass Activity Sensor Strip). The system takes incoming data and makes predictions in real time. It also generates computer models to improve future performance.

Brittany Pousett, head of research and development at Barber Prosthetics, says the system “is a completely new approach to picking up signal and controlling an electric prosthesis from someone’s body,” and could potentially increase the motion available to users. 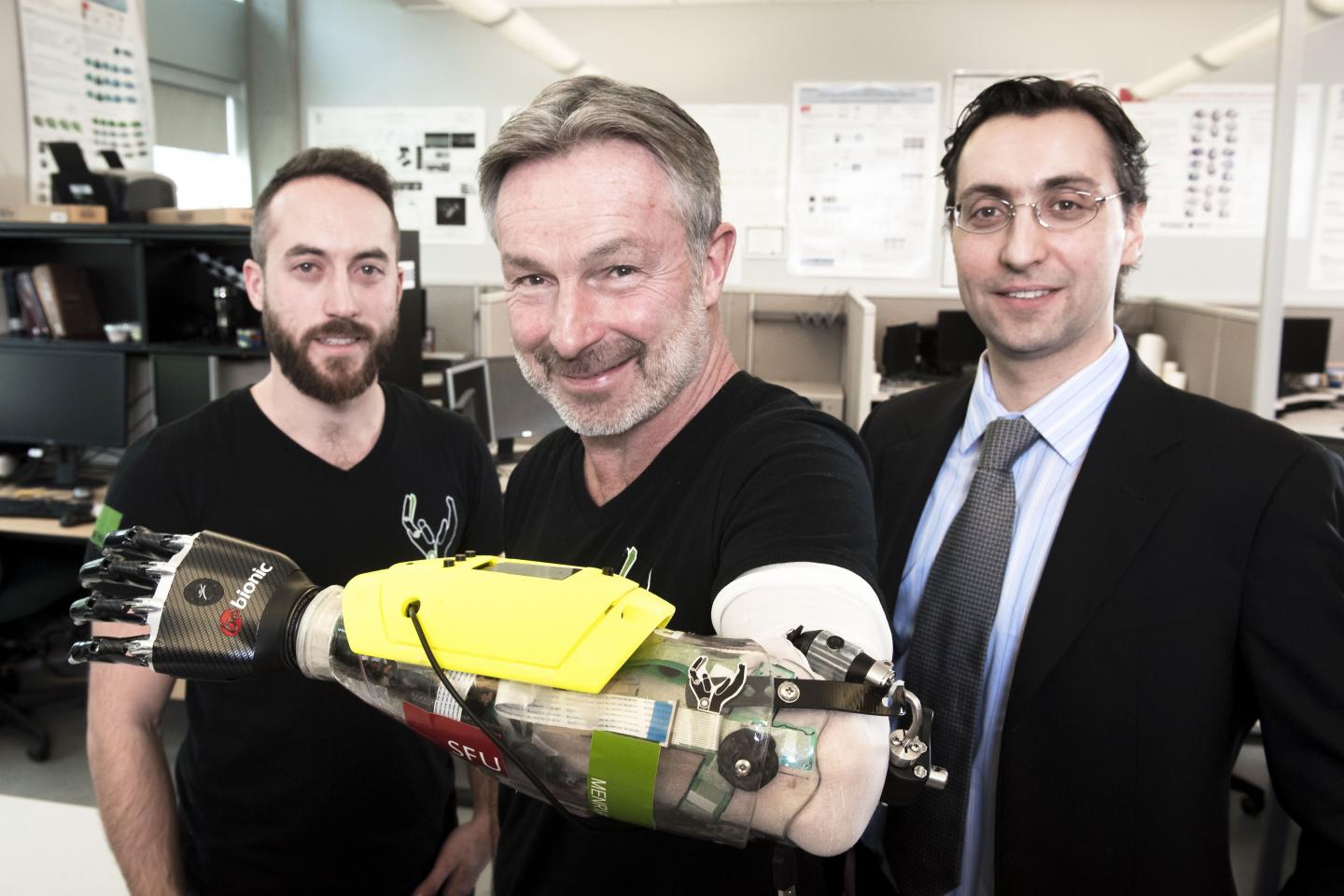 These functions will be put to the test when the team competes at the inaugural Cybathlon event in Zurich in October 2016. Dubbed the cyborg Olympics, it’s an international competition for people with disabilities using robotic technology.

Organizers from the Swiss Federal Institute of Technology hope the event will spur innovations that are useful beyond the competition and allow people with disabilities to regain independence.

Letain will use the technology in an obstacle course for people with powered arm prostheses to perform everyday tasks such as slicing bread and opening jars. The team tested the prototype at the Cybathlon trial held last July and is working to optimize the system for the competition.

The SFU team is the only Canadian team taking part alongside 80 teams from more than 30 countries.

Backgrounder: Moving Beyond Myoelectric Solutions
Once the stuff of science fiction, a new generation of advanced prosthetic hands with robotic fingers that move independently can perform tasks requiring precise and delicate movements, such as threading a needle or holding an egg.

But current control systems – the “brains” of the device, including the sensors and software that make it move – are not intuitive. This is because externally powered prostheses, such as myoelectric devices, are typically controlled by electromyogram (EMG) signals generated by muscle contractions in the residual limb.

The system, invented in the 1950s, measures only two electrical signals in the limb. As a result, the user must learn to isolate specific muscles in the biceps or triceps, and then flex them repeatedly to make robotic fingers open or close.

Menon says it is challenging because normally we unconsciously use multiple muscles at the same time to complete a movement. Frustration with the system can lead amputees to abandon these devices.

In response, the SFU team is pioneering the use of a band of pressure sensors that detect intricate muscle movements across the surface of the remaining limb.

Besides being a more intuitive experience amputees do not require extensive training to perform simple functions.

Menon believes the technology could be used in combination with electromyography to become the standard for prosthetics.