A team at the Harvard John A. Paulson School for Engineering and Applied Sciences (SEAS) and the Wyss Institute for Biologically Inspired Engineering at Harvard University has invented a method for 3D bioprinting thick vascularized tissue constructs composed of human stem cells, extracellular matrix, and circulatory channels lined with endothelial blood vessel cells. The resulting network of vasculature contained within these deep tissues enables fluids, nutrients and cell growth factors to be controllably perfused uniformly throughout the tissue. The advance is reported March 7 in the journal Proceedings of the National Academy of Sciences.

“This latest work extends the capabilities of our multi-material bioprinting platform to thick human tissues, bringing us one step closer to creating architectures for tissue repair and regeneration,” says Jennifer A. Lewis, the Hansörg Wyss Professor of Biologically Inspired Engineering, the senior author on the study and a Wyss Core Faculty member.

To date, scaling up human tissues built of a variety of cell types has been limited by a lack of robust methods for embedding life-sustaining vascular networks. Building on their earlier work, Lewis and her team have now increased the tissue thickness threshold by nearly tenfold, setting the stage for future advances in tissue engineering and repair. The method combines vascular plumbing with living cells and an extracellular matrix, enabling the structures to function as living tissues. In the study, Lewis and her team showed that their 3D bioprinted tissues could sustain and function as living tissue architectures for upwards of six weeks.

In the study, Lewis’ team demonstrated the 3D printing of one centimeter-thick tissue containing human bone marrow stem cells surrounded by connective tissue. By pumping bone growth factors through the supporting vasculature lined with the same endothelial cells found in our blood vessels, the team induced cell development toward bone cells over the course of one month.

“This research will help to establish the fundamental scientific understanding required for bioprinting of vascularized living tissues,” Zhijian Pei, National Science Foundation Program Director for the Directorate for Engineering Division of Civil, Mechanical and Manufacturing Innovation, which funded the project. “Research such as this enables broader use of 3D human tissues for drug safety and toxicity screening and, ultimately, for tissue repair and regeneration.” 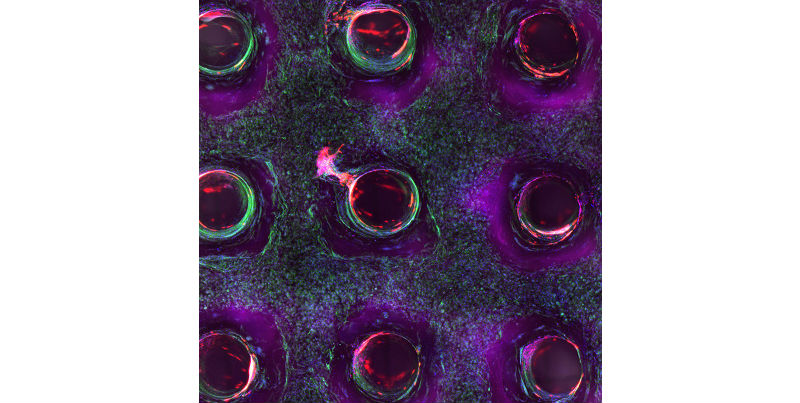 Lewis’ novel 3D bioprinting method uses a customizable, printed silicone mold to house and plumb the printed tissue structure. Inside this mold, a grid of vascular channeling is printed first, over which ink containing living stem cells is then printed. The inks are self-supporting and strong enough to hold shape as the structure’s size increases with each layer of deposition. At intersections meeting within the foundational vascular grid, vertical vascular pillars are printed, which interconnect a pervasive network of microvessels throughout all dimensions of the stem cell-laden tissue. After printing, a liquid composed of fibroblasts and extracellular matrix fills in the open regions around the 3D printed tissue, cross linking the entire structure.

The resulting soft tissue structure is replete with blood vessels, and via a single inlet and outlet on opposite ends of the chip, can be immediately perfused with nutrients to ensure survival of the cells. The pervasive vasculature facilitates stem cell differentiation by enabling delivery of cell growth factors throughout all areas of the tissue.

To achieve a variety of tissue shapes, thicknesses, and composition, the shape of the printed silicone chip can be customized and the cell inks can be tuned to include a wide variety of cell types.

“Having the vasculature pre-fabricated within the tissue allows enhanced cell functionality at the deep core of the tissue, and gives us the ability to modulate those cell functions through the use of perfusable substances such as growth factors,” said David Kolesky, a graduate researcher at SEAS and the Wyss Institute and and one of the study’s first authors.

“Jennifer and her team are shifting the paradigm in the field of tissue engineering based on their unique bioprinting approach,” said Wyss Institute Founding Director Donald Ingber, M.D., Ph.D., who is also the Judah Folkman Professor of Vascular Biology at Harvard Medical School and the Vascular Biology program at Boston Children’s Hospital, and Professor of Bioengineering at SEAS. “Their ability to build living 3D vascularized tissues from the bottom-up provides a potential way to form macroscale functional tissue replacements that can be surgically connected to the body’s own blood vessels to provide immediate perfusion of these artificial tissues, and thus, greatly increase their likelihood of survival.  This would overcome many of the problems that held back tissue engineering from clinical success in the past.”

The work was supported by the National Science Foundation and the Wyss Institute for Biologically Inspired Engineering at Harvard University.