Researchers at the Spanish Center of Subtitling and Audiodescription (Centro Español de Subtitulado y Audiodescripción – CESyA), which comes under the Board of Trustees on Disabilities (Real Patronato sobre Discapacidad) and is managed by the Universidad Carlos III de Madrid (UC3M), have developed Blappy, an application that enables chat communication via Bluetooth between two people with functional disabilities. 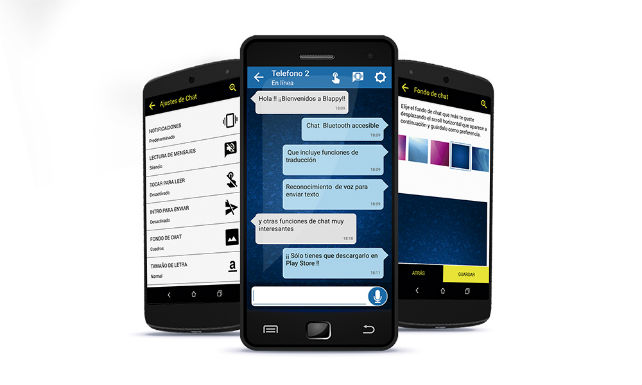 Blappy is currently available for mobile phones that have the Android operating system. Developers are working on a version that will work on phones with Apple’s iOS platform. (Credit: UC3M)

Blappy is a smartphone application that enables fluid communication between people with visual and/or auditory disabilities. Voice messages can be changed into text and vice versa. In addition, high contrast images can be included, and the screen has a zoom feature. It is also compatible with the TalkBack accessibility service. To use the service, it is only necessary to have the app installed in two terminals that are less than 30 meters (98.4 feet) apart and in a closed Bluetooth environment. Once the user is registered, there are two ways to send messages: Either using voice recognition or a keyboard.

This application could be of interest for many users. In Spain alone there are nearly one million visually handicapped people and nearly one million more with auditory impairment, according to CESyA. The application is available in four languages (Spanish, French, English and Portuguese), but its technology allows conversations to be translated into all of the languages that the Google Translator service recognizes.

Blappy is currently available for mobile phones that have the Android operating system; using it simply requires downloading the app in the Play Store and enabling Bluetooth to connect with another smartphone that also has the app installed. Nevertheless, its developers are already working on a version that will work on phones with Apple’s iOS platform.

In the words of Belén Ruiz Mezcua, associate professor of UC3M’s Computer Science department and the general director of CESyA, “This initiative represents a commitment to accessibility and is an example of technology transfer in the service of society’s needs.” In the same way, “it achieves the paradigm of design that is accessible for everyone,” states Adrián Baeza, CESyA researcher and one of the professionals involved in the project’s launch.

This project has been carried out with the support of UC3M’s Audiovisual Accessibility Laboratory (Laboratorio de Accesibilidad Audiovisual), which is staffed by 19 professionals and is part of the Center for Technologies for Disability and Dependence in UC3M’s Science Park.