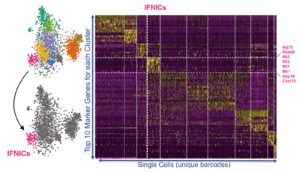 California researchers have discovered that the immune system’s response after a heart attack plays a significant role in what happens following a heart attack.

Following a heart attack, heart cells begin to die, causing the immune system to send immune cells into the dead tissue to clear debris and start stabilizing the heart wall. University of California San Diego researchers wanted to figure out why dying cells in the heart create an immune system response.

Researchers examined individual cardiac immune cslls and mapped the individual transcriptomes using single cell RNA sequencing. During the examination, they discovered that the DNA from dying cells appears similar to a virus after a heart attack. An ancient antiviral program in the immune system called type I interferon is triggered in special immune cells when it notices the “virus.” The researchers named them interferon inducible cells (IFNICs).

The researchers blocked interferon response genetically or with a neutralizing antibody administered after a heart attack. They found that there was less inflammation, less heart dysfunction and improved survival. They also noted that blocking antiviral responses in mice was shown to improve survival from 60% to over 95%, suggesting that this could be a potential therapeutic option to prevent heart attacks from causing heart failure in the future.

“We are interested to learn whether interferons contribute to adverse cardiovascular outcomes after heart attacks in humans,” Kevin King, a bioengineer and physician at UCSD and researcher on the study, said in a press release.

Over time, the immune system has evolved natural antiviral programs to protect the body from a wide variety of invading pathogens. Immune cells detect molecular fingerprints of pathogens and activate the IRF3 protein while secreting interferons to create a defense program for hundreds of interferon-stimulated genes.

The antiviral interferon response is activated after a heart attack, according to the researchers, even though there is no infection. They found that dying cell DNA causes the immune system to think that there is an infection.

A previously unrecognized subset of cardiac macrophages were part of the immune cells in the interferon response. The cells were unable to be identified by flow sorting due to its unknown unique markers on the cell surface. Using single-cell RNA sequencing, the UCSD researchers could see the expressions of every gene in over 4,000 cardiac immune cells and could find the specialized IFNIC population of responsible cells.

The research was published in the journal Nature Medicine.