Researchers at the Skaggs School of Pharmacy and Pharmaceutical Sciences at CU Anschutz have developed a technique that estimates an HIV-negative patient’s adherence to drugs prescribed to prevent HIV transmission during sex.

The test measures traces of antiretroviral drugs in a spot of dried blood to determine how much pre-exposure prophylactic, or PrEP, medicine a patient has used. Truvada, the only FDA-approved antiretroviral PrEP drug for HIV prevention, is proven more than 90 percent effective in stopping HIV transmission during sex, in those who use it consistently. The assay technique provides an objective way to tell if patients are using PrEP consistently.

“There’s a need to objectively measure PrEP adherence because traditional ways have not been very effective,” said Pete Anderson, Pharm.D. and professor of pharmaceutical sciences at the CU Skaggs School of Pharmacy. “This assay takes advantage of the long half-life of PrEP medication in red blood cells. This means the drug builds up in these cells only if the patient takes it consistently.”

The method is to spot a sample of a patient’s blood on an absorbent paper-like card and send it to a lab which isolates and measures concentrations of PrEP drugs found in dried red blood cells. These drugs’ presence are measured to estimate how many doses a patient has taken over the last month or two. Clinicians then have an objective measurement that shows if a patient is using PrEP effectively. Studies show that people using the PreP method are most successful when medication is used consistently.

The lab manager at the CU Skaggs School of Pharmacy who developed the assay, Lane Bushman, said, “Most cell sample collections require significant effort for processing, but the dried blood spot is an easy sample collection technique. This helps with implementing the test in most settings.” 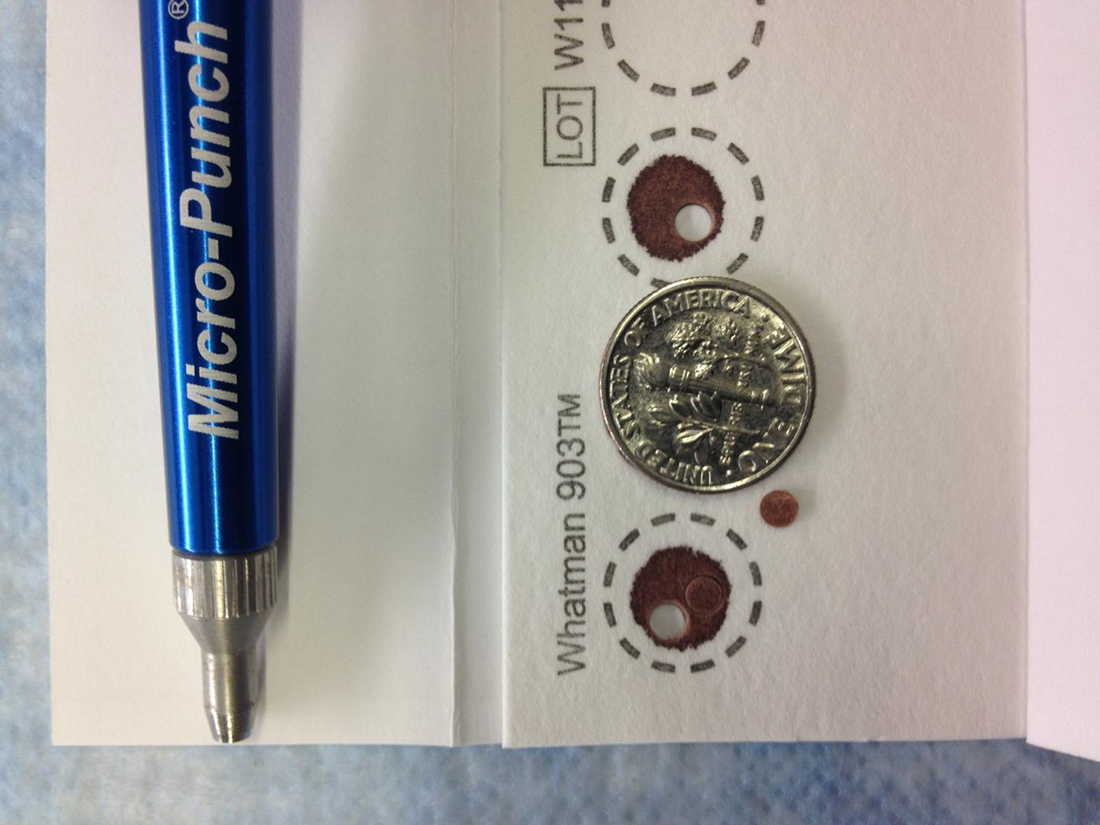 A 3mm punch is taken from a dried blood spot and sent to the lab to assess PrEP drug levels. (Credit: CU Anschutz Medical Campus)

“This assay has been in high demand for PrEP studies,” Anderson said. “We recently helped a South African lab to develop the method to help with testing demand in that region.”

The assay is now being used in research internationally and the approach could have application for other drugs that require accurate measurement of patient adherence to dosing.

“We now have a grant to develop a way to do the testing at bedside,” Anderson said. “We also see applications for other medications. For example, our colleague Dr. Jennifer Kiser is evaluating if a similar test could work for Hepatitis-C medications.”

Anderson’s research, supported by the National Institutes of Health, is ongoing with studies now underway at the University of Colorado Anschutz Medical Campus and collaborating institutions.