Scientists are reporting progress on a blood test to detect many types of cancer at an early stage, including some of the most deadly ones that lack screening tools now.

Many groups are working on liquid biopsy tests, which look for DNA and other things that tumors shed into blood, to try to find cancer before it spreads, when chances of cure are best.

In a study Thursday in the journal Science, Johns Hopkins University scientists looked to see how well their experimental test detected cancer in people already known to have the disease. The blood tests found about 70 percent of eight common types of cancer in the 1,005 patients. The rates varied depending on the type — lower for breast tumors but high for ovarian, liver and pancreatic ones.

In many cases, the test narrowed the possible origin of the cancer to one or two places, such as colon or lung, important for limiting how much follow-up testing a patient might need. It gave only seven false alarms when tried on 812 others without cancer.

The test is nowhere near ready for use yet; it needs to be validated in a larger study already underway in a general population, rather than cancer patients, to see if it truly works and helps save lives — the best measure of a screening test’s value.

“We’re very, very excited and see this as a first step,” says Nickolas Papadopoulos, one of the Hopkins study leaders. “But we don’t want people calling up” and asking for the test now, because it’s not available, he says.

“It’s such a good first set of results” that it gives hope this approach will pan out, says Dr. Peter Bach, a health policy expert at Memorial Sloan Kettering Cancer Center who consults for a gene testing company. “Anything close to 50 percent or 40 percent detection is pretty exciting stuff,” and this one did better than that, he says.

Dr. Len Lichtenfeld, deputy chief medical officer of the American Cancer Society, is encouraged that the test did well on cancers that lack screening tests now. If a blood test could find 98 percent of ovarian cancers at an early stage, as these early results suggest, “that would be a significant advance,” he says.

But he cautioned: “We have a long way to go to demonstrate its effectiveness as a screening test.” 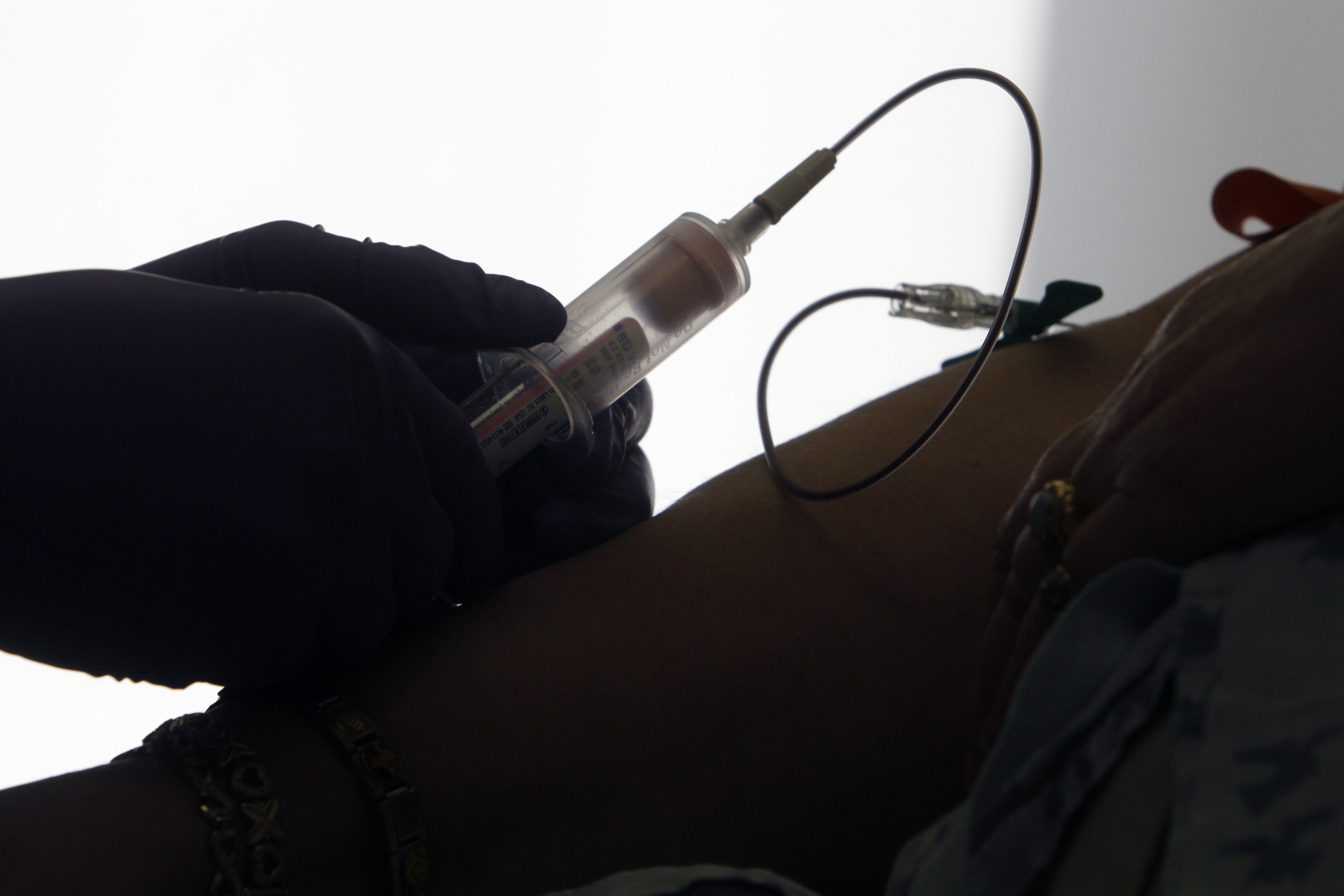 In this Tuesday, April 28, 2015 file photo, a patient has her blood drawn for a liquid biopsy at a hospital in Philadelphia. According to a report released Thursday, Jan. 18, 2018, scientists have made progress on a “liquid biopsy” test that can detect many types of cancer at an early stage from bits of DNA and other substances in blood. (AP Photo/Jacqueline Larma)

The test detects mutations in 16 genes tied to cancer and measures eight proteins that often are elevated when cancer is present.

It covers breast, colon and lung and five kinds that don’t have screening tests for people at average risk: ovarian, liver, stomach, pancreatic and esophageal. Prostate cancer is not included. A blood test already is widely used — the PSA test — but its value for screening is controversial.

Researchers tried the new test on people whose cancers were still confined to where it started or had spread a little but not widely throughout the body. It detected 33 percent of breast cancers, about 60 percent of colon or lung cancers and nearly all of the ovarian and liver ones. It did better when tumors were larger or had spread. It did less well at the very earliest stage.

The test probably will not work as well when tested in a general population rather than those already known to have cancer, researchers say. Hopkins and Geisinger Health System in Pennsylvania have started a study of it in 10,000 Geisinger patients who will be tracked for at least five years.

The work was financed by many foundations, the Mayo Clinic, the National Institutes of Health and Howard Hughes Medical Institute, which provides The Associated Press with funding for health and science coverage. Many study leaders have financial ties to gene testing companies, and some get royalties for patents on cancer detection methods.

Researchers say the test could cost around $500 based on current materials and methods, but the ultimate goal is to commercialize it, so what a company would charge is unknown.

Also this week, Taiwan-based CellMax Life gave results on its liquid biopsy test, which looks for whole tumor cells shed into blood, at an American Society of Clinical Oncology conference.

Researchers tested 620 people getting colonoscopies or with confirmed colon cancer at a hospital in Taiwan. The company said its test had an overall accuracy of 84 to 88 percent for detecting cancer or precancerous growths and a false alarm rate around 3 percent.

The company’s chief executive, Atul Sharan, says U.S. studies should start this year. The test is sold now in Taiwan for $500, but should cost around $150 in the U.S., he says.

Dr. Richard Schilsky, chief medical officer of the oncology society, says results are encouraging, but the test needs more study, especially to see if it gives too many false alarms.

“The last thing you’d want is a test that tells you you might have cancer if you don’t,” he says.