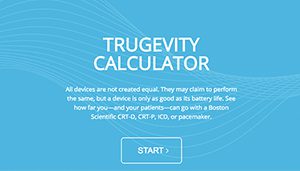 The idea is to help health providers quickly grasp the benefits of Boston Sci’s longer lasting EnduraLife battery technology, which the company touts has nine clinical studies and eight years of real-world data to back up its abilities.

“We used to do those [battery life] calculations in-house … for physicians who are interested. … We decided, ‘Why not let the truth be free?'” said Ken Stein, SVP and CMO for rhythm management and global health policy at Boston Sci.

In the case of EnduraLife, the value argument is that a Boston Scientific ICD may only need to be replaced every 13 years, versus seven years, Stein said. And with around 6-8% of patients having a complication during a pulse generator replacement surgery for a defibrillator, extending device life can be a big deal.

“Foundational is patient outcomes. The fact that you can spare a patient surgeries is great, but then the other flip side of that is you’re not paying for a new device every five years. Again, if it lasts nearly twice as long, it’s nearly half the cost over the long run,” Stein said.

“It’s been out now for so long in the field that now there’s a huge amount of evidence that backs up that the longevity really is as good as we say it is,” Stein said. “At this point, this is pretty old innovation, but what’s happened is now we’re at the time where we’ve got the proof points that say this really does live up to the hype.”

So what about the holy grail? What about someone getting an implantable cardio device such as a pacemaker or ICD and never needing to have a second surgery or only needing it in extraordinary circumstances?

“I think we all have some interest in looking at some ideas around: novel types of technologies, some energy-harvesting technologies, for instance,” Stein said. “I don’t see any likelihood that we’re going to get there within a short-term. By short-term, I’m saying three to five years. I would have every expectation that in the long-term, we’ll be able to come up with some breakthrough technologies that will substantially expand the longevity of devices.”