Doctors treating a critically ill boy with a devastating skin disease used experimental gene therapy to create an entirely new skin for most of his body in a desperate attempt to save his life.

Two years later, the doctors report the boy is doing so well that he doesn’t need any medication, is back in school and even playing soccer.

“We were forced to do something dramatic because this kid was dying,” says Dr. Michele De Luca of the University of Modena in Italy, who got a call for help from the German doctors treating the boy.

The boy, then 7, was hospitalized in June 2015 with blisters on his limbs, back and elsewhere. He quickly lost about 60 percent of the outer layer of his skin and was put into an induced coma to spare him further suffering. Doctors at Children’s Hospital at Ruhr University in Bochum, Germany, tried skin grafts from his father and donor skin, but all failed.

“He was in severe pain and asking a lot of questions,” the boy’s father says in a video provided by the hospital “Why do I suffer from this disease? Why do I have to live this life? All children can run around and play, why am I not allowed to play soccer? I couldn’t answer these questions.”

The boy’s parents asked about experimental treatments, and De Luca and his colleagues were contacted. They had previously used gene therapy to produce a small piece of skin in a similar case. They told the family that the boy’s precarious state meant that he might not survive the complicated surgeries needed to save him. 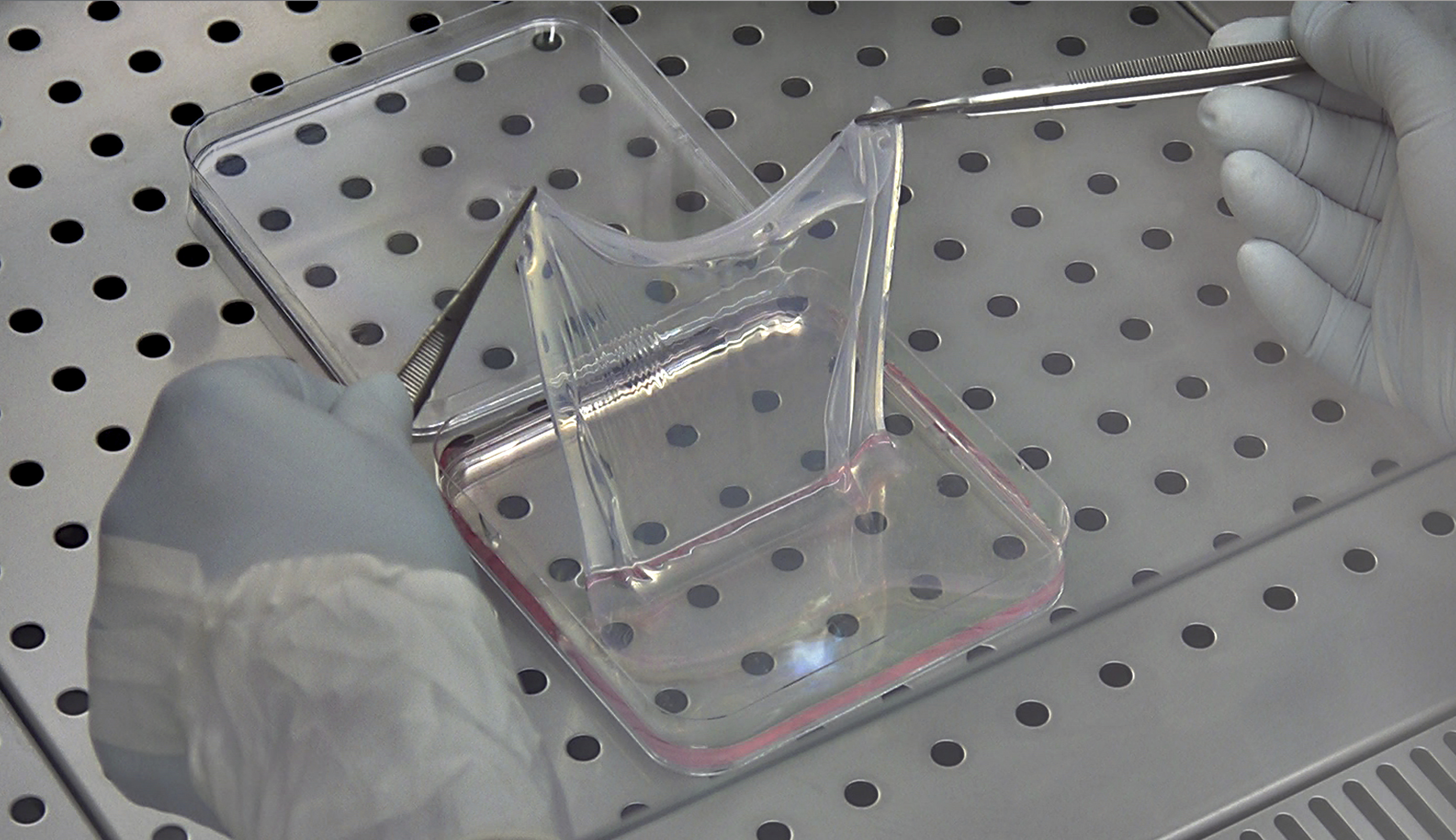 In this photo taken on Oct. 18, 2017, doctors lift up a sheet of skin in a lab at St Josef-Hospital in Bochum, Germany. Doctors treating a critically ill boy with a devastating skin disease used experimental gene therapy to create an entirely new skin for him. Two years ago, the boy was admitted to a German hospital, with blisters all over his body. In an experiment, doctors took a small sample of the boy’s skin and added a normal version of the bad gene to his skin cells. They grew new sheets of skin in the lab and transplanted those onto the boy. Details of the case were published Wednesday, Nov. 8. (Mirko Wache via AP)

“It was a tough decision for us, but we wanted to try for (our son),” the boy’s father says. The family asked that their names not be used to protect the boy’s privacy.

The boy had a rare, incurable skin disease called junctional epidermolysis bullosa, caused by genetic mutations. People with the disease lack critical proteins that attach the outer layer of the skin to the inner layer, resulting in fragile skin with almost constant blisters and open sores.

To fix that, the doctors took a small piece of the boy’s skin from an area that was OK. In the lab, they added a normal version of his bad gene to his skin cells. They grew sheets of the boy’s skin, in much the same way skin grafts are grown for burn victims.

In total, they grew close to a square meter of skin (3 square feet.) The lab-grown skin was then transplanted onto the boy in three operations, ultimately covering 80 percent of his body. Ten days later, the new skin was already beginning to grow, De Luca said. After eight months, the doctors said that nearly all of the boy’s skin had been generated by the modified stem cells.

So far, no problems have been detected. De Luca says the boy will be monitored closely for skin cancer and other potential issues.

“This kid is back to his normal life again,” one of the German doctors, Dr. Tobias Rothoeft, says. “That’s what we dreamed of doing and it was possible.”

Details of the case were published Wednesday in the journal Nature. 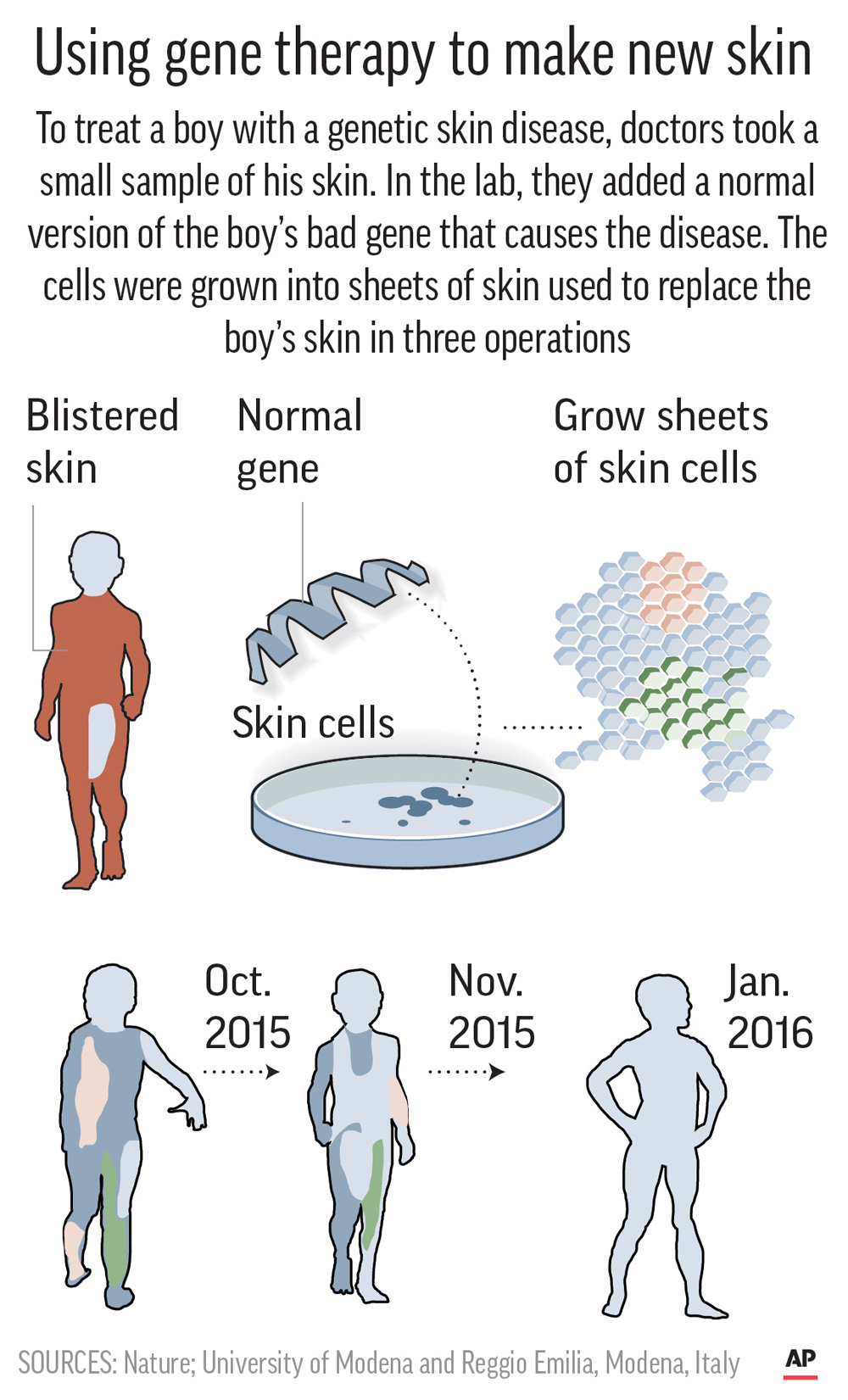 “This takes us a huge step forward,” says Dr. Peter Marinkovich of Stanford University School of Medicine, who has done related work. He says it was impressive that De Luca and colleagues were able to make such large amounts of viable skin after correcting the genetic defect.

But he notes the approach might not help in more serious cases, which often have tricky complications, like skin blistering in the lungs. Marinkovich says many patients don’t survive beyond age 2 and that using the treatment for babies could be even riskier.

Dr. Holm Schneider warned that some severely ill patients might have an extreme reaction to skin transplants with an added gene.

“The immune system might recognize this new gene as something foreign to be attacked and destroyed,” says Schneider, of the University Hospital Erlangen in Germany. Still, he says the approach was worth trying in dying patients.

The boy and his family later visited De Luca and the other Italian doctors involved in his treatment.

“The parents are very grateful and say their life has completely changed,” De Luca says, recalling how the boy spontaneously began taking off his clothes. “The boy was so happy with his new skin that he wanted to show off.”